As you all saw in my Spider-Man #648 review, Mac Gargan recently lost the Venom symbiote, and the US Government took possession of it. What happened to it from there? Well, they put it on Flash Thompson.

Yes, that Flash Thompson. I guess they decided he was the perfect man to put a possessive intelligent suit on since he wanted to be Spider-Man and that was the next best thing. So, being the new Venom, he gets a new solo series. Well, it can't be worse than the Sinister Spider-Man. 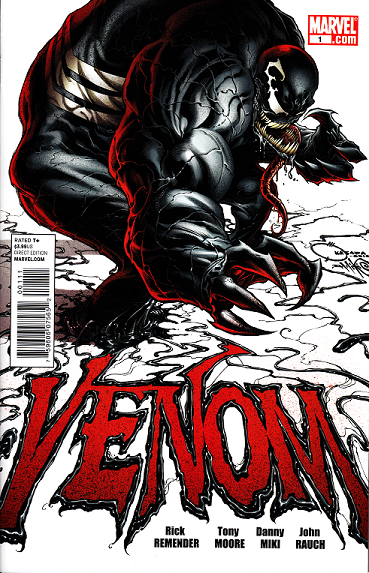 The comic begins in-- wait, what is this? Nrosvekistan? The hell? Eastern Europe? God, you can't just throw random syllables and add -stan at the end. Well, you know what? I can do that too. I'm from, uh, Yopilistan. Yeah, totally plausible.

Anyway, in, augh, Nrosvekistan a lot of people are running away from crazy explosions and laser looking things shooting down. Their salvation comes in the form of giant Iron Man looking battlesuits from the UN, here to save everyone. "It's Stark Tech!" They say, "We can't lose!"

As the UN guys get their asses handed to them, we see who is the cause of all of this, Jack O' Lantern, an old Green Goblin ripoff who just became goddamn terrifying. 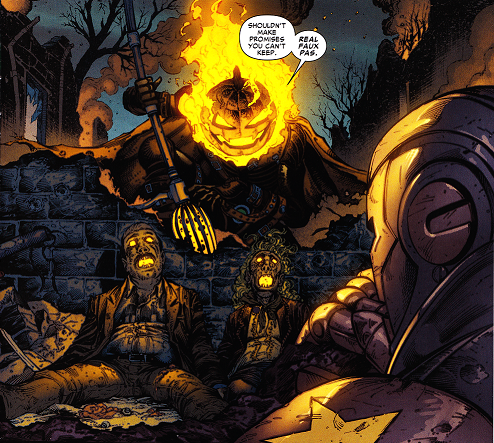 Then Jack and his mysterious contact, who of course is cloaked in darkness, go on to recap their situation, talking about how they have some Antarctic Vibranium, it cuts through any metal, and here, in Nrosvekistan is a dude who's making it into bullets, so they need to capture him. As they get weird and Jack O' Lantern starts waxing philosophical about chaos, our good buddy Venom drops out of a helicopter. 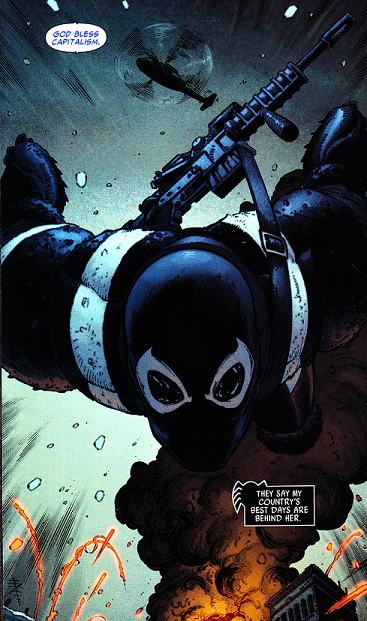 He starts kicking ass and taking names, while giving his own recap. They only let him keep the symbiote on for 48 hours at a time, lest it "permanently" bond to him. By permanently they mean until it gets boring and they take it off him easy as pie, if the previous Venoms are any indication. If he loses control of the symbiote, someone back at command is to throw the kill switch and then it's time to get a new operative. He picks up a live grenade that's about to explode next to him, because apparently the symbiote can stop it from doing that.

At this point, I mean, his internal monologue is nothing I haven't seen a hundred times before, whenever you get a look into a soldier's head. "I'm far from home, fighting for my country, dark bad place blah blah blah." I mean, he's like a mix of Sylvester Stallone in Rambo and Schwarzeneggar. Only not as entertaining. 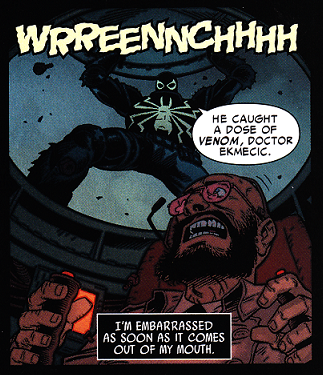 So Venom finds the guy he's supposed to find, but gets his ass kicked by Jack O' Lantern, who then takes the target. Using the symbiote, he manages, somehow, to aim and fire a tank from outside, and thinks he hits Ol' Jack. Unfortunately, he misses, and as Jack comes back to attack, command reminds him to calm down. 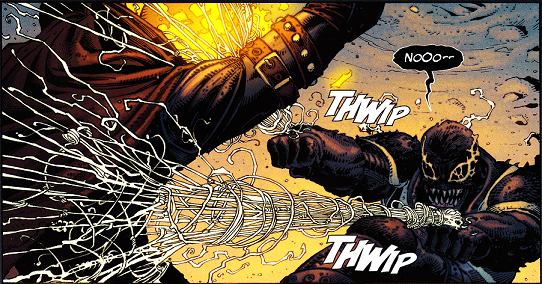 When things look bleakest, Flash remembers he's got a live grenade that hasn't exploded yet, somehow.

After getting half his freaking face blown off, Jack O' Lantern somehow manages to do something rather than just scream in agony, and grabs the Doctor and flies away again. Flash does the only logical thing. 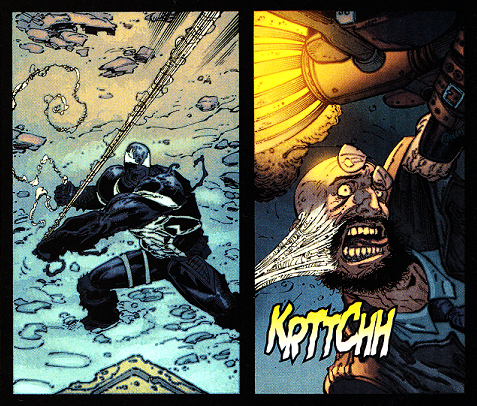 Well, uh, okay. Seeing as how that was the opposite of his mission, when he gets back to base, command is pretty mad at him. Especially since he went kinda crazy with the suit there, not the best first mission. 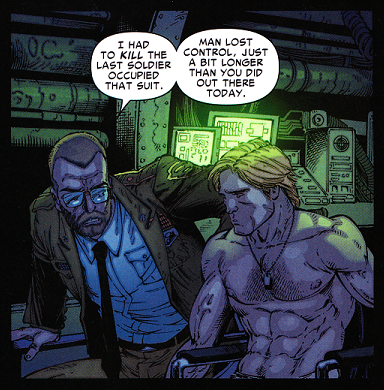 Wait, so Flash isn't the first? You already had to use the kill switch? They haven't tried anything else yet? Considering the last person who used it was a homicidal cannibalistic maniac, I don't see why this was the first application of the Venom symbiote. Someone didn't think this over very well.

Anyway, Flash goes back home, only to remember he missed some benefit dinner he was supposed to go with Betty Brant to. 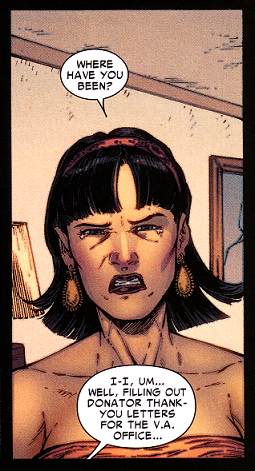 Wait, why doesn't he just say he was with the military? It's his freaking job; everyone knows he's a soldier, why can't he just say he got shipped out again? They're trying to force a Spider-Man type thing here. That becomes more apparent when Betty accuses him of drinking again. You see, Flash is an alcoholic, but he's been off the wagon for years. After leaving the apartment, Flash monologues about how his dad was a drinker too.

The comic ends with Flash depressingly riding into the distance.

I don't know about this comic. The whole military-war thing is someplace Venom hasn't had too much exposure in, but it's something pretty overdone to begin with. It looks like sticking the Venom symbiote in there didn't make it all that refreshed. I mean, Flash hasn't got much of a personality, he's just a thing that shoots stuff and talks about war. I mean, he's pretty much just a dumb action movie star. I guess that's not the worst thing, but then they try to make him Spider-Man, with the "Oh no he's not there to fulfill social engagements" thing tacked on there unnecessarily. I mean, the alcoholism is a new thing as far as Venom's concerned, just not a new thing as far as ANY WAR MOVIE EVER. Every soldier in media's hot a "dark side" and the fact that Flash's just happens to be an actual dark organism that makes him get giant sharp teeth isn't all that much of a development. It's not terrible, I just hope next issue is more inspired than just War Movie With Main Character Replaced With Venom (Kinda). Still hiding my dark and brooding soul, this is the W Defender!
Posted by Walter Sojda at 1:17 PM No comments:

Wow, okay, remember when Spider-Man sucked? Yeah, I tried to forget it too. But then remember how Dan Slott took over writing and we got the awesomeness that is issue #648? Before now I was nervous that maybe it just seemed good in comparison to the baby-chasing, or that it was a fluke, it would drop off, or something somewhere would go wrong. But in my hands I hold one of the best issues of Amazing Spider-Man that I have ever read. 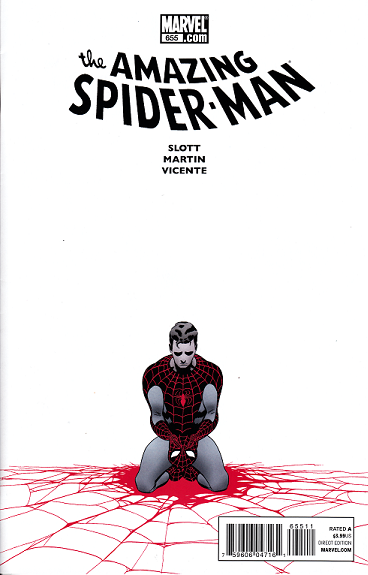 This comic takes place after the Spider Slayer storyline where, as a result of Alistair Smythe's attacks, Marla Jameson died.

The first part of the comic has no dialogue whatsoever, and follows J. Jonah Jameson and Peter on the day of Marla's funeral. I was a bit wary at first with this artist, having never seen them draw something this substantial, but you'll see in a bit why I know they were a good choice. In this whole sequence, Jameson never changes his face, with a completely blank and apathetic look the whole time, but these panels still give you a real sense of what he's feeling. 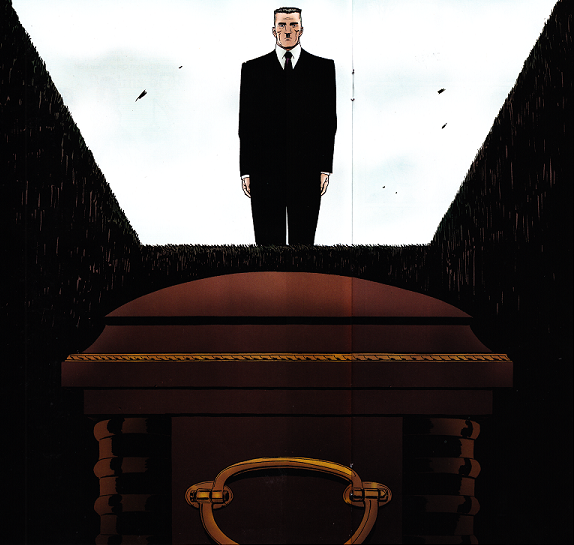 That night, Peter goes to sleep, and what starts is one crazy dream sequence. (Oh, a lot of full page scans ahead. Can't limit this stuff to just a few panels.) 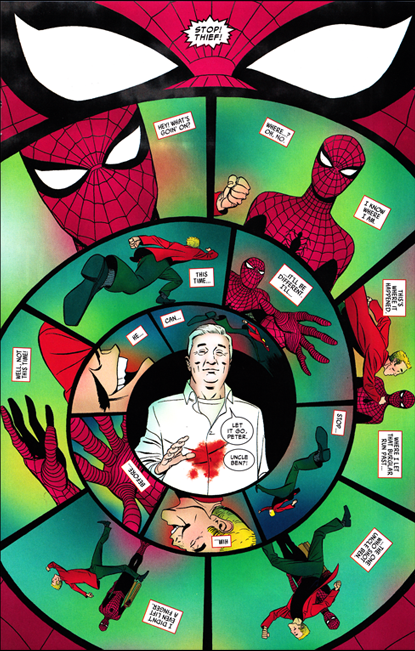 Uncle Ben leads Peter to his parents, who, when they turn to face him, are faceless. They and Uncle Ben's killer board a plane, saying, "Dead is dead Peter, it's all the same to us." Aunt May then starts walking up to the plane, and when Peter grabs her hand, it's Marla who looks back at him. 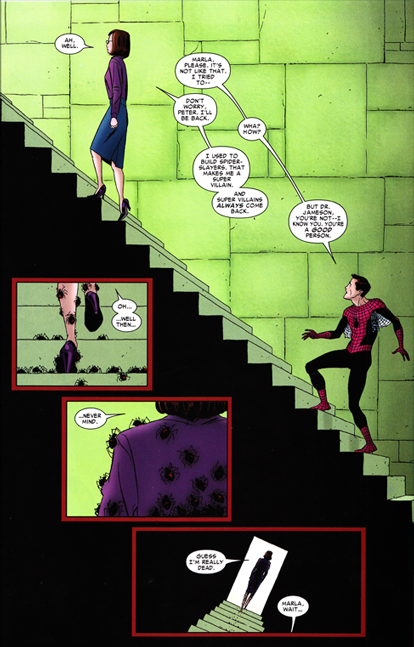 Following this is a mind-bending two page spread, showing every character who ever died in a Spider-Man comic. Slott and Martin (the artist) really did their research here, and it shows. This whole thing is just awesome. 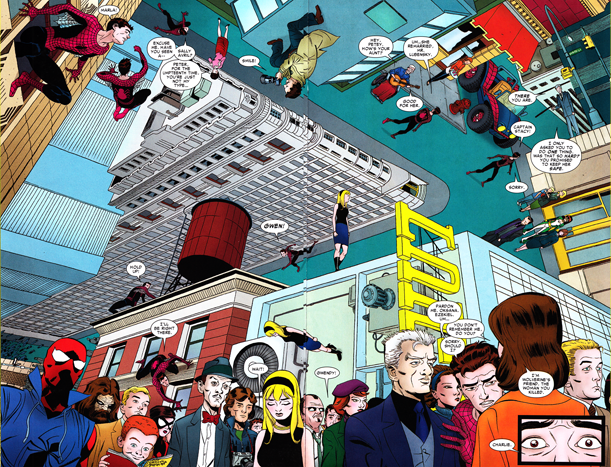 The woman was an assassin named Charlemagne, and Wolverine's friend. She jumped in the middle of a fight between Spider-Man and Wolverine, taking a punch meant for Wolverine, and dying in the process. Peter says he never meant to kill her, or anyone.

And who shows up to refute that but the Green Goblin, holding Gwen Stacy. Both the Goblin and Gwen, showing a broken neck, taunt Peter about his inability to kill the Green Goblin. Gobby knocks Gwen off the bridge, and Peter reaches after her. Instead the hand of Kraven grabs his. 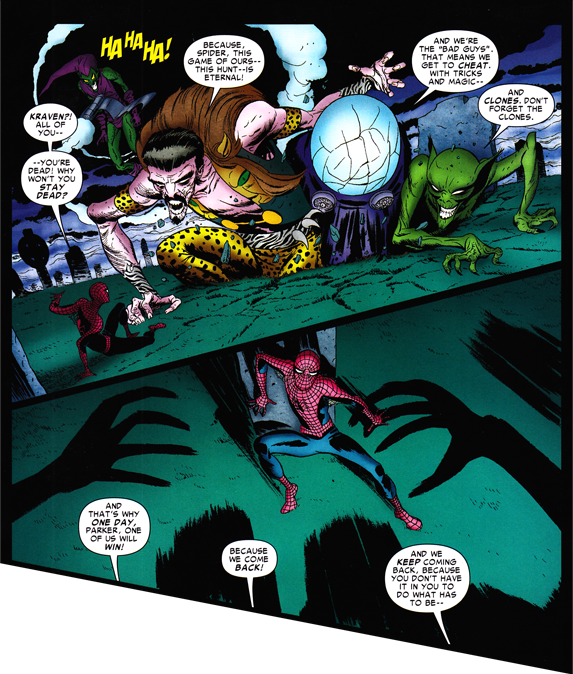 Now I just love this page, it really shows Peter's frustration at everything that's happened lately, which mirrors my frustration. I mean, they made him into a loser, everything went wrong, and they hardly showed any impact it had on him. Hell, it's gotta be hard being a comic book character, when people you're completely sure are dead come back to life for no reason, just to make your life a living hell.

Next, different heroes like the Punisher, Wolverine, Captain America, and the Sentry talk about how killing your villains is the only real way to deal with them. Sentry brings up the Joker paradox in regards to Carnage, in that every time you don't kill him, you just let him kill more people, so it's your fault they're dead.

We flash back to the hallway, the fateful moment as the crook runs by. Except this time, Peter grabs him and beats the ever loving shit out of him. Except, as we get a wider shot, it's not the crook that lies bloody and broken on the ground, but Uncle Ben. "This... This is how you kill me, Peter." 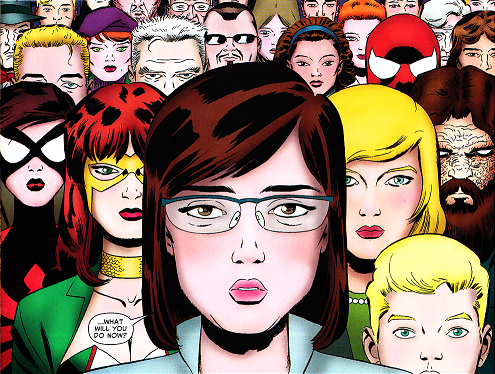 Peter starts awake, and swings to a water tower and takes off his mask. He makes a declaration that wherever he is, no one dies.

The next page shows a group a police cars, with Police Captain Watanabe talking through a megaphone, asking a guy with hostages why he did that, since he had never even given them demands. 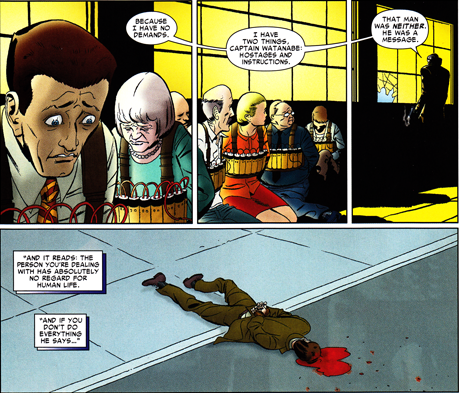 The last page shows him and the many many barrels of explosives behind him.

First and foremost: I freaking love this issue. Sure, it's mostly just dream sequence, but I love it when we get a good look into the mind of our favorite webslinger. We can finally see just how the guilt affects him aside from making him fight crime. It's a poignant look that finally takes in all of Spider-Man continuity so far. How it would actually feel to have to fight the same people, that keep coming back over and over again. I'm really interested to see where this goes, and Slott is the writer to make this stuff work. Giving my approval, this is the W Defender!
Posted by Walter Sojda at 4:58 PM No comments: