Spider-Man: Reign is one of those things I always thought I wanted to read. The idea of a hero who had given up finding new resolve and purpose appealed to me. That was the Dark Knight Returns' entire conceit, and it revitalized Batman in the public eye. The other factor that reeled me in was seeing an ultimately good character pushed to their limits, suffering such trauma that their ideals were tested and sometimes broken. Again, Dark Knight Returns featured that in spades, but my interest was solidified with Spider-Man: Back in Black, where he hunts down the gunman who shot Aunt May.

What I mean to say is, Spider-Man: Reign looked like it had all the right pieces in place to be a classic story you could point to whenever someone commented that Spider-Man was too childish. Unfortunately, in their zeal to create an "adult" Spider-Man story, their result was childishly grim, somber for the sake of it, and seemingly written by someone who had no idea what Spider-Man was about. 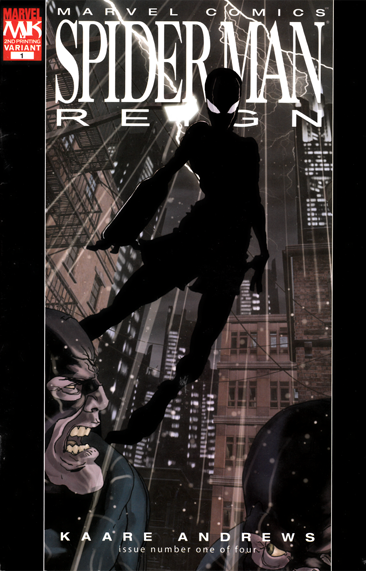 The basic story is that it's the far future, New York is ruled by some techno-facist regime, called, unironically, the Reign. Peter Parker is an old widower who works at flower shop, for some reason. One day J. Jonah Jameson, now the oldest man in the world, comes back to find Peter and convinces him to be Spider-Man again, while the Mayor of New York sets in motion a protective barrier around the city, called The Web. It all ends up with a bunch of old supervillains fighting Spider-Man again, the corpse of Doc Ock digs up the corpse of Mary Jane, and it was all a plan for Venom to eat everyone in the city.

So it's virtually a play-by-play ripoff of the Dark Knight Returns, but with none of the substance. It's easy to say that DKR was needlessly grim, or had stereotypes of the antagonists, but at least it had a point. One of those points, admittedly, was that liberals are bad. Granted! But the big theme that story centered around was that people don't change. Bruce Wayne could never escape being Batman, The Joker would always be a psychopath, Two-Face would forever feel his scars, and Jim Gordon would always be a good man. Despite what those GODDAMN PINKO COMMIES believe, there's something at the core of someone that doesn't go away. Neither time, nor therapy, nor healing can get rid of it.

Spider-Man Reign, however, does not have this kind of theming. Peter Parker isn't just old, he's crazy. He hallucinates the whole time and when he puts on the Spider-Man suit he acts like a man possessed. Is he at any point lucid during the entire story? There's no character development with him, it just reveals that Mary Jane actually died from cancer from Peter's radioactive "body fluids." It wouldn't have been difficult to cobble together something about "Responsibility" or "Power." Instead this was just empty.

In DKR, you had a lot of characters return to show how the progress of time had affected them. Harvey Dent was crazier than ever, Green Arrow became an underground dissident missing an arm, and Superman was a government crony. You could see the steps between the present day and these versions of the characters. Events in the past still affected them greatly, with the superhero ban causing Bruce Wayne to retire and Superman to end up an employee of Ronald Reagan. There was more under the surface of that book, where events you weren't around to witness had altered these people, all you could see was the echo of things that took place.

In Reign, there's none of that. Why are there no other superheros in New York? Why did a fascist regime take hold? Is it just New York? None of these questions are answered, or even really alluded to. Hell, this regime hardly affects Peter Parker at all, the only reason he had to retire was Mary Jane's death, from his... "love"

Nobody else from modern Marvel is around. No Iron Man, no Fantastic 4, and there's not even an excuse to explain their absence. They just stopped existing. Jameson returns, but instead of the brash newspaperman he used to be, he's a raving crackpot who brings kids to an old church and yells at them. Why did he go crazy? I dunno. The Sinister Six returns, only now they're the Sinner Six, and they aren't different at all. They don't even look like they've aged. Why put a story in the future if you're going to ignore the passage of time?! 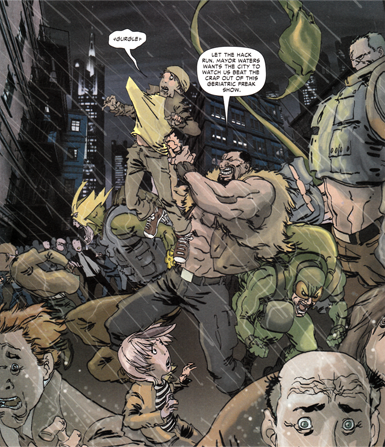 No bland facsimile for DKR would be complete without the young girl viewpoint character. Dark Knight had Carrie Kelly, who became Robin, that... spunky chick? To be honest, she didn't really have that much agency, she just seemed to be there to show how STUPID her LIBTARD PARENTS are, and provide some hero worship for Batman. I'll give Reign some points here, because the female protagonist here, who's name is... Wait, what's her name? 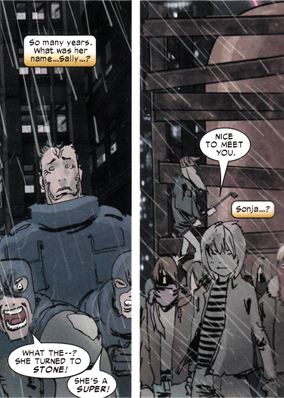 Okay, so she's never given a name. She's mostly a viewpoint character so you can see what Jameson's doing, but near the end she leads resistence against the symbiotes. Then it's revealed she's Sandman's daughter, and then she's shot and dies. Okay, maybe I'm just cutting her some slack because she's not ruining an old character, they just made a new one that's mediocre.

So yeah, it's derivative of Dark Knight Returns, we all know that, they even marketed it as such. But how does it compare to a similar Spider-Man story, Back In Black? 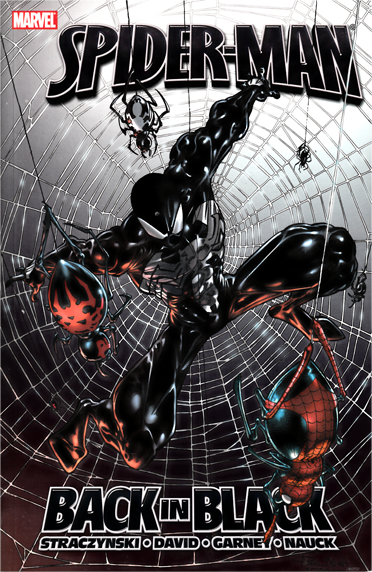 Back in Black takes place after the first Marvel Civil War, when Spider-Man revealed his identity, but betrayed Iron Man once he found out Tony became a monster. Peter, now a criminal for breaking the Superhero Registration Act, is targeted by a hitman, who ends up missing Peter and shooting Aunt May instead. Spider-Man goes on a rampage, finding out who's responsible while trying to save May's life despite being a wanted man. I love it.

Back In Black is an example of a Spider-Man story that trends towards a darker tone, but doesn't feel childish or stupid. Reign ain't that. In BIB, Peter doesn't joke at anyone. He's pushed to his emotional limit and is willing to do things he's never done before to get revenge. In Reign, he jokes, but not what you're thinking. It's as if Kaare Andrews heard that Spider-Man tells jokes while he's fighting villains, but didn't quite understand what that meant. We all know Spider-Man does little quips and makes fun of his villains, but in Reign he just... tells jokes. 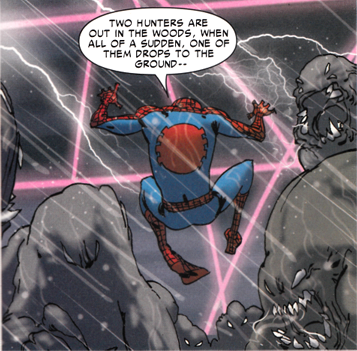 The big difference is, BIB Peter still feels like Peter Parker, in Reign we not only missed the character development in the past, we don't get any during the book itself. It's as if they tried to make it cosmetically similar to Spider-Man, without the heart. At one point, he quotes the old Spider-Man cartoon theme. 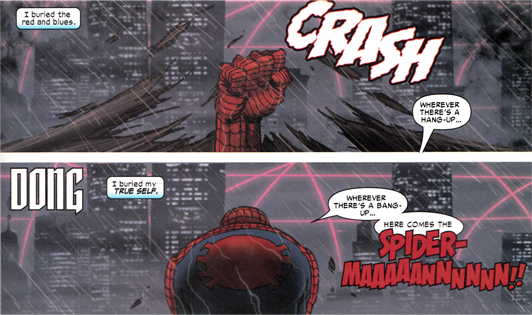 It mixes things like a graffiti artist being beaten half to death with somebody quoting the Beverly Hillbillies theme. It's not making some kind of statement about finding light in times of darkness, it's just slapdash writing. It doesn't quite reach the level of puerile cynicism as Millar's stuff, like Kick-Ass, but it's certainly close. There's no subtlety about the drama, it more or less just runs down the laundry list of Peter's dead loved ones, multiple times. They literally shove a dead Mary Jane in your face. 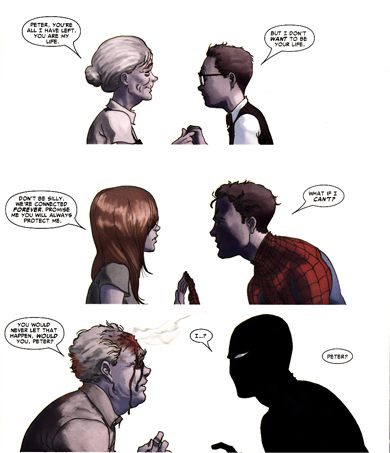 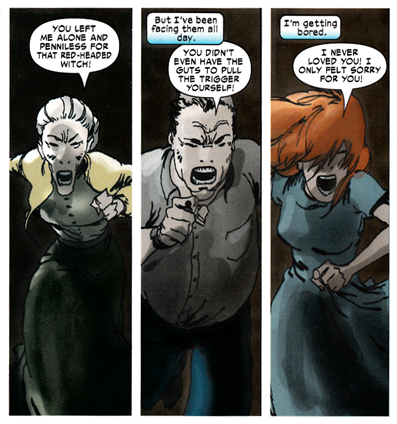 Back in Black took itself very seriously, presenting the things Spider-Man did as skirting the line of morality and absolutely crossing that line legally. Reign doesn't know if it wants to play it seriously or not, trying to show serious drama but breaking the tone a scene later. At least if it were more campy, like the 90's clone stuff, it could be enjoyable in some way.

That's really the sum of it, Spider-Man Reign was never sure about what it wanted to be. It didn't harken back to the old days of Spider-Man, nor did it try to develop the character in a different direction. It's a shame, really. I'm sure they could've done something with this story, instead of this paint-by-numbers ripoff. Was there a vision for this? Did anybody in the process for creating this have an actual inspired moment? Creating a Dark Knight Returns for Spider-Man could be a cool jumping-off point, but you have to do something different! Give it a core of optimism, make the characters seem like real people! As it is, this comic is just aimless, and it seems to me, a huge waste of potential. 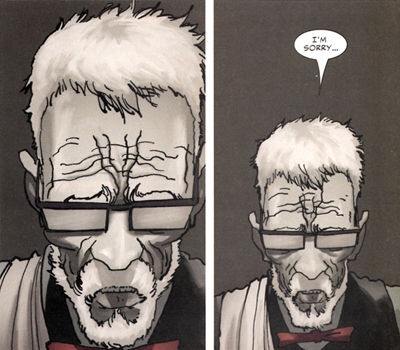 Posted by Walter Sojda at 5:26 PM No comments: