Along with the Ultimate Spider-Man portion of the Death of Spider-Man story, they've started another series, Avengers vs. New Ultimates, written by Mark Millar, who wrote the original Ultimates and Ultimates 2, before Jeph Loeb took over in Ultimates 3. The New Ultimates are pretty much the same as the old Ultimates, meaning Captain America, Thor, Iron Man, and Giant Man. The Avengers are Fury's team that he formed shortly after Ultimatum, when Captain America went rogue for a short period of time. 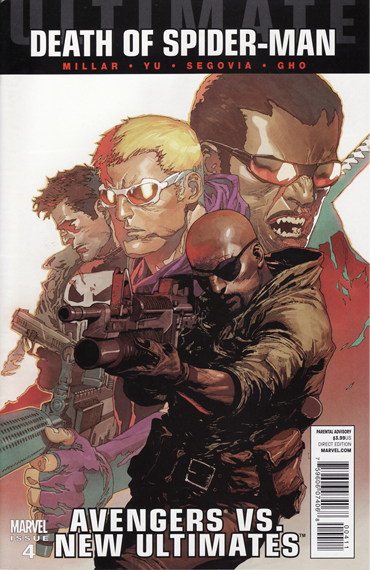 In the previous issues, the Ultimates found a horribly mutated attempt at a Chinese super soldier, along with intel that said it was Fury who sold the super soldier secrets to the Chinese. They proceeded to try to find him, while Fury brought the old gang back together, with members like War Machine, Blade, and the Punisher. Inevitably, they have a battle which is brought to New York, and makes up the giant explosions on the bridge that Spider-Man saw. Last issue, the Punisher had his sights on Captain America, but Spider-Man jumped in the way, being shot himself. This issue opens with Spider-Man laying on the ground. 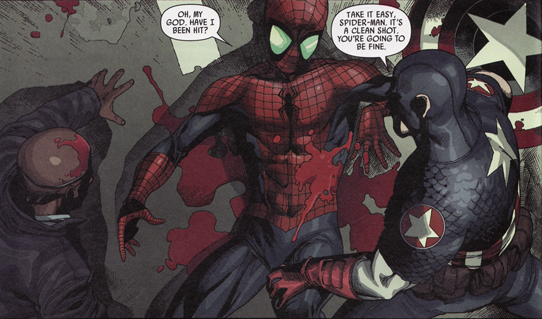 He's not very observant, is he?

Nick Fury is then shot, as SHIELD men rappel down, and point their guns at the Punisher, who gets all crazy. 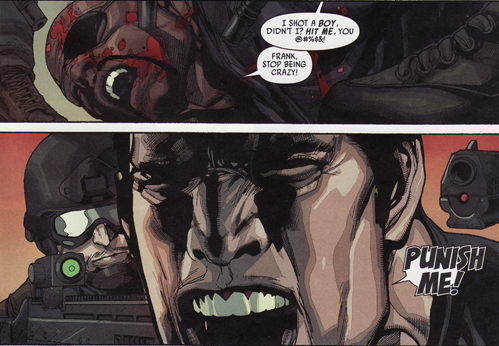 Captain America proceeds to carry Spider-Man, while praising him in a direct contradiction of their conversation in Ultimate Spider-Man. Of course, I guess Spider-Man saving his life gave Cap a new perspective. Nick Fury, even though he's on the ground and is all bleeding, smiles, because his reinforments have arrived, meaning War Machine, who smashes into the bridge and breaks it into a million tiny pieces. Spider-Man manages to cling to the side and pull himself back up, while everyone else falls in the water below.

Meanwhile, in Manhattan, we see Blade punch the hell out of Black Widow, and afterwards he is chased by Giant Man. Because the traffic there is murder, he has some trouble catching him, so Iron Man just kinda rams into him. 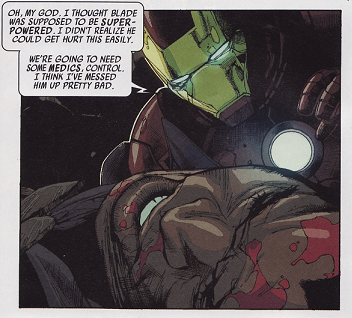 Carol Danvers, after regaining consciousness, finds Black Widow next to her. Don't worry, now that she's back in the game, she'll get everything under contr-- 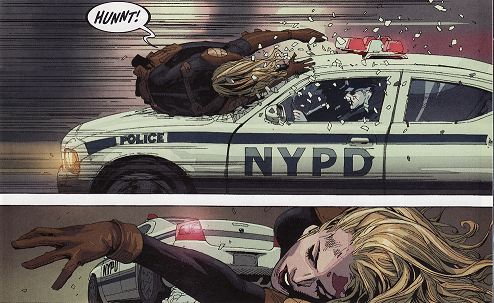 Uh. Guess that's the end of that.

At the White House, Dr. Gregory Stark, Tony Stark's brother discusses the reasons Fury would betray the country, citing his need for power. Since Carol Danvers is currently, ahem, out of commission, the president names Dr. Stark as head of SHIELD, so he heads to the Helicarrier.

Back at Tony Stark's pad, he's barfing in the toilet, and he comments a lifetime of alcohol abuse made oral chemotherapy easier, since he's already used to vomiting every morning. Cap helps him up, and they talk with Black Widow and Thor in the living room. Stark mentions to Thor that he remembers the arrangment they made.

Yes! Finally! For those who don't know, Thor used to talk like a normal guy, but suddenly, in Ultimates 3, for no reason, Thor started talking Shakespearean like his mainstream counterpart, and this continued into Ultimatum. This was entirely Jeph Loeb's doing, who really has no idea how to write for the Ultimate Universe. This is why I love Mark Millar: He both fixed the problem and highlighted it by having the other characters in the series recognize that it was stupid so they fixed it.

Anyway, they get to the topic of Nick Fury, and how it's still surprizing that he was selling out state secrets for the past 15 years, but Black Widow doesn't believe it, and is sure that someone's setting him up. 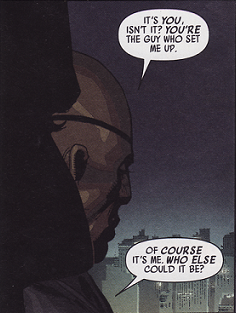 Gregory reveals that he's the one who's been sending out the super-soldier secrets, but he's actually been sending them to the pro-government rebels. How devious. Turns out this was all so Greg could become leader of SHIELD, as part of this weird sibling rivalry thing Tony and Gregory have. As a final act, Ol' Greg orders his men to kill Fury. 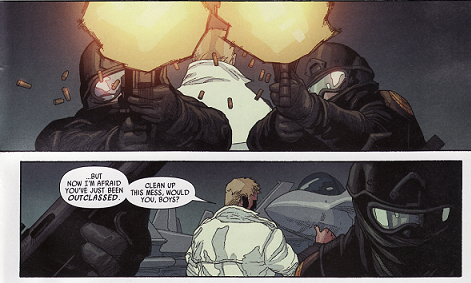 Mark Millar, what can I say about you? This comic is actiony, but more than that it's hilarious! Millar really tends to bring dark comedy into places it probably shouldn't be, but I'm either glad or sickened by it. Seeing as the Ultimates are his creation, he writes them best. Or at least, better than Jeph Loeb, that goddamn piece of- anyway, I enjoyed reading, so if nothing else, this whole Death of Spider-Man thing is good for some ol' Millar action. This is the W Defender, and this ends Millar Time.
Posted by Walter Sojda at 7:57 PM No comments: