Well, there's kinda been a sort of content drain lately, so I decided to delve back into the time history forgot. And by that, I mean like, 3 years ago. More specifically, right in the middle of Brand New Day, with the storyline nobody wanted to see. Or if they did, they have problems. 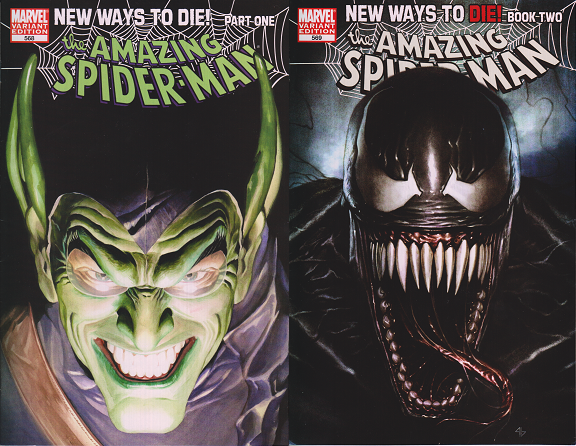 This storyline is infamous for reasons that will become clear later, but really, all you need to know is this takes place before the American Son storyline. Meaning, really, that was a step up from this. American Son was an improvement. Just think about that for a second.

The comic starts with a recap of everything that's ever happened to Spider-Man. Well, okay, a three page recap of his basic origin, because apparently they thought this would be a great place to bring people into Spider-Man comics. Then this happens. 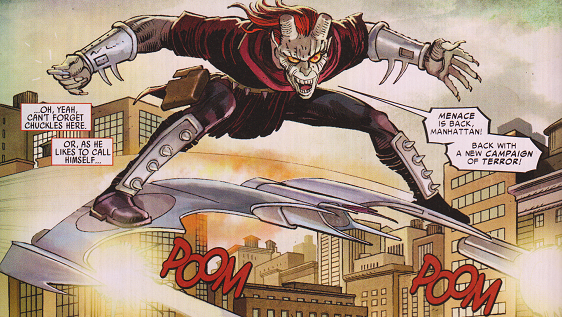 She blows up a campaign van of Bill Hollister, father of Lily Hollister, and mayoral candidate. So really, she blows up her dad's van. Oh! Wait! We're not supposed to know that yet! We're still supposed to think Menace is a dude. So Spider-Man shows up, they fight, and she blows up a wall. From the collapsing building, Spider-Man sees a bunch of what look like Chinese immigrants pour out, so he does the only logical thing a superhero can do and snaps some pictures.

He decides to sell the pictures to Front Line, the newspaper everyone who used to work at the Daily Bugle works at because it became the DB (and later got a bailout). I guess the writers realized they made a mistake in changing the Daily Bugle, so they just wrote in Front Line so Pete could still have the same job. So he sells the pictures, which apparently connect Randall Crowne, another mayoral candidate, with illegal sweatshops. Oh god, I really hope this isn't about politics, please please don't be about politi-- 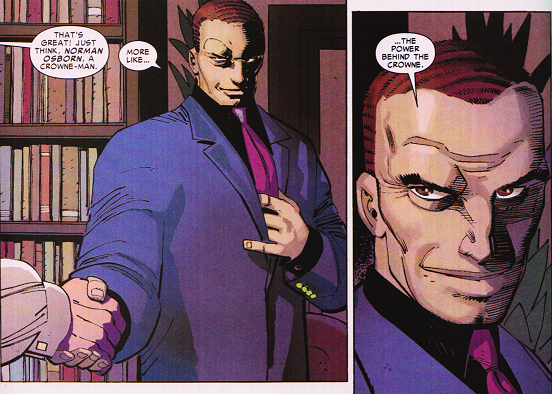 So yeah, that's Norman Osborn, apparently really interested in New York politics for some reason. See, at this point, Norman was head of the Thunderbolts, a team of "heroes" who were actually just horrible monsters that had really really good plubicity. We cut to them killing cardboard cutouts of heroes, until Osborn shows up and tells them they're going to New York.

Then we cut to Dexter Bennett, being subtle as ever. 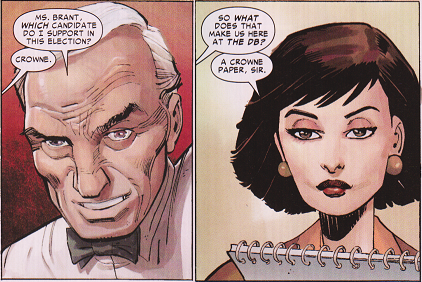 Good thing the writing is so subtle. So he sends Betty Brant out to investigate Martin Li, another supporter of Hollister, as well as the founder of a chain of homeless shelters. Can homeless shelters have chains? I guess it's the McDonalds of hobos. Oh, also people with terminal disease are getting better after being in the shelters. 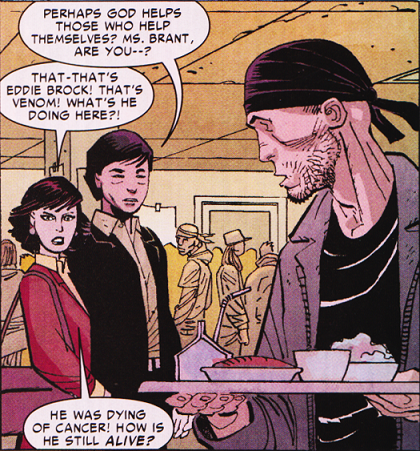 Yeah, apparently that's Eddie Brock, who's now Hobo man. It seems Matt Murdock took on Eddie's case, proving in court it was the symbiote's fault he killed people. Martin Li puts his hands on Eddie's shoulder, which makes bullshit happen in his bloodstream, that nobody notices.

Peter shows up at his apartment building, where he's assaulted by the SWAT team, and brought into his own apartment, where the Thunderbolts wait for him.

We begin part 2 with Norman asking Peter how to find Spider-Man. After no responce, Norman laughs at the concept of a warrant and rips up Peter's shit. Then they leave without gaining anything. I'm not quite sure what the point of that was. At that point Peter's roommate Vin shows up. 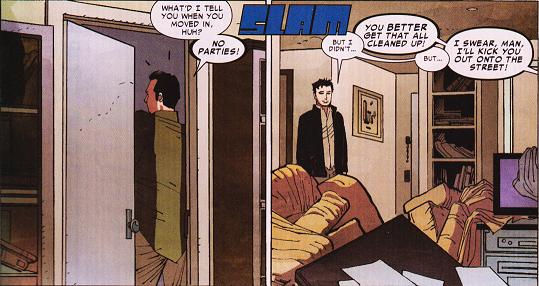 So after that we cut back to the homeless shelter, where Eddie Brock is happy to say he's cured of cancer! Yaaay! Martin Li takes him into his office, where he shows Eddie the gameboard of Go he has, where he's been playing against somebody, but he doesn't know who. (HINT: IT'S MR. NEGATIVE MARTIN LI IS MR. NEGATIVE THEY'RE THE SAME GUY HE'S EVIL)

Anyway, Randall Crowne gives Osborn an award for whatever, and everyone loves him. Seriously, at this point, I would say New Yorkers don't just have a bad memory. They have antrograde amnesia. Osborn killed people! He was put in jail! HE DRESSED UP AS A GREEN DUDE AND RODE AROUND ON A ROCKET AND BLEW SHIT UP. WHAT IS WRONG WITH YOU PEOPLE. 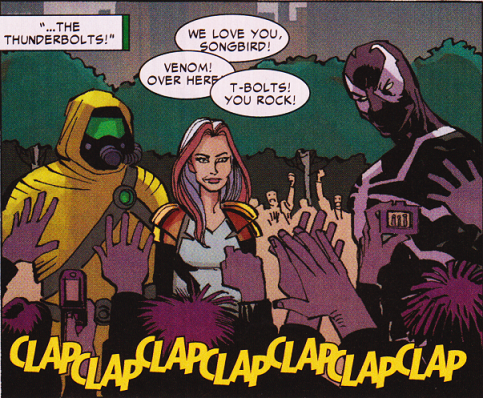 AAAAAUUUUGH VENOM EATS PEOPLE ON A REGULAR BASIS HOW ARE YOU SO STUPID.

I'll admit he basically did the same thing during Dark Reign, but at least then he had the decency to disguise the horrible villains as superheroes! At least he tried!

...So, uh, after that Osborn goes to visit Harry at his coffee shop. Osborn hates it because, I dunno, he must be a Starbucks kinda guy. Harry gets sad and leaves. Osborn then gets back to the Thunderbolt base to find Spider-Man. Spidey decides to fix that by breaking into their base. Of course! Hiding right under their nose! 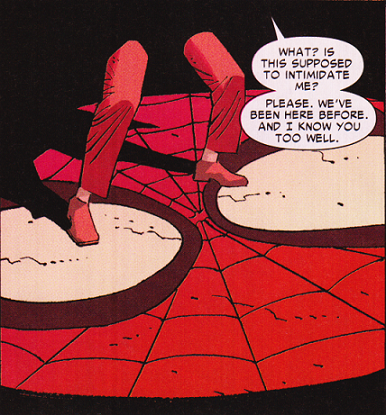 At that point, Venom, being completely batshit insane, somehow senses a previous host at the homeless shelter. I don't remember him having that power, but whatever. Spidey, remembering that Aunt May is volunteering at that shelter, rushes to save the day. Before that though, Gargan finds Brock, and plans to kill him? I think?

You know, as this comes to a close, it wasn't the best intro, but I don't know why I thought this was so bad before. I mean, what could happen on the last page-- NO WAIT NO I DIDN'T MEAN THAT 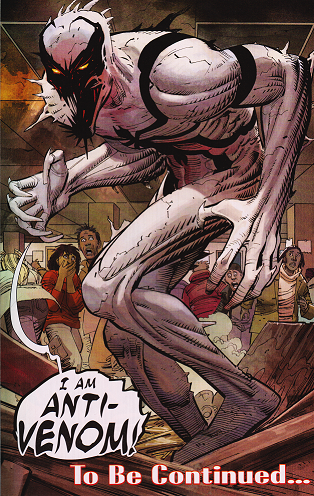