Yes! What you've been waiting for! I attended the panel entitled: Marvel NOW!: Amazing Spider-Man and Beyond. What's Beyond you ask? Well, it's the Superior Spider-Man. 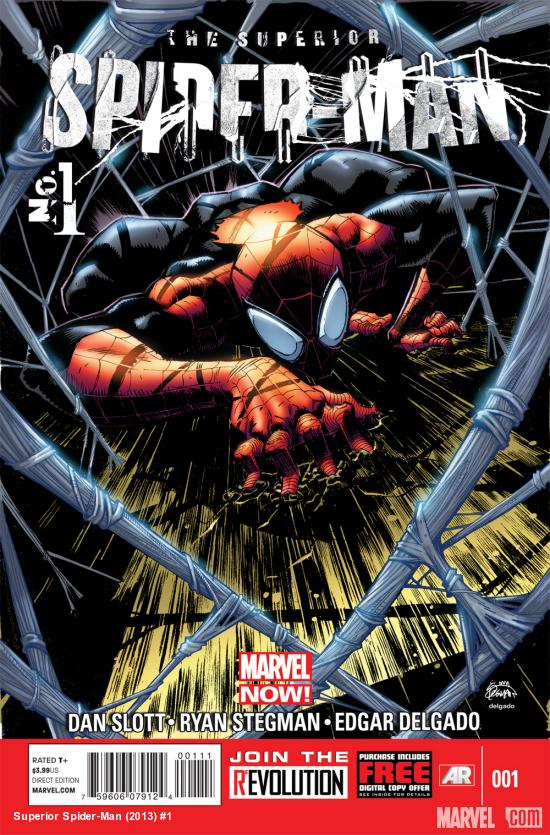 When I first heard this, I was livid! How could they kill off another Spider-Man?! Not another Death of Spider-Man! I couldn't take that. But, you know, after the panel, I think my fears are somewhat assuaged.

First of all, Dan Slott and Steve Wacker made it clear that Peter not being Spider-Man does NOT mean he is dying. What it does mean is still up in the air, but I think I can say with confidence that Peter Parker will still be with us in this Superior series.

Dan Slott also assured the people that this new Spider-Man will not be some random asshole (CoughMilesMoralescough) but instead someone with "Spider-Man pedigree." That alone makes me less apprehensive about the storyline.

See, with that, it can still be about continuing Peter's story, especially if the new Spider-Man is still connected to Peter. In Ultimate, Peter's story was simply aborted, ended without a solid conclusion, to be replaced by someone we've never seen before.

One criticism that seems common about Superior Spider-Man is that people seem to think it will be "grim and gritty" while in the press release, people like Slott said it would be "dark and weird". I can understand the jumping to conclusions, but in explaining what they meant by "dark and weird" they cited stories like The Death of Gwen Stacy, and Kraven's Last Hunt, which are quintessential Spidey stories.

All that, combined with the fact that I could tell that Dan Slott still really loves Spider-Man, puts me more at ease about this project. I'm eager to see what they're doing, and I only hope Dan Slott doesn't pull another New Ways to Die and make me sad.

In other news, Venom is moving to San Franc-- I mean, Philadelphia! Yes, home of the Liberty Bell and some other stuff I guess. I don't mind him moving from New York, but I really thought the Venom series would involve a lot more exciting locales, like Yopilistan or whatever. I'll have to see how the new writer, Cullen Bunn, does.

A new Morbius: The Living Vampire series is starting, as an exploration of the more occult or supernatural horror aspects of the Marvel Universe. I can get behind that, and Morbius seems like a good enough character to follow.

Oh, and SPECULATION TIME: At one point during the Q&A of the panel, one kid asked why they don't make Spider-Man 2099 stories anymore. Steve Wacker and Dan Slott answered in a strange way, "Oh, you like Miguel O'Hara? You think he's a good Spider-Man?" Yeah, see, I think Superior Spider-Man might be some version of Miguel O'Hara. For example, look at the cover, above. See his hands on the wall? They're more smashed in, like he's using claws to climb instead of sticky fingers. I mean, it's purely speculation at this point, but that's half the fun. Some people think it might be Kaine, but since the Scarlet Spider series will continue after ASM #700, I can safely say that's not a reasonable expectation. But who knows, maybe it's Alpha! Oh god, I hope not. Until next time, this is the W Defender!
Posted by Walter Sojda at 8:58 PM No comments:

It's time for W Defender's Comic Con Coverage! Yes, I am at New York Comic Con this year, and things are looking pretty hopping. Today wasn't that busy for me, but I'll just go over what I've seen.

A Look Inside The Batmobile:

This was the premier of a documentary on the Batmobile, all variations of it, which will be on the special Blu-ray of the Dark Knight Rises. It was pretty interesting, to see the design ethos' at work behind each new edition of the Batmobile, from the Adam West version to the Tumbler. Good stuff.

I stopped by the Marvel and DC booths, rather than check out any of the panels they had. At DC they mostly showcased their new fighting game, Injustice: Gods Among Us. It looked pretty good, if I do say so myself. They had a green screen where you could put yourself on a Justice League or DC Supervillains comic cover, and you got a print. I think mine turned out pretty well.

At Marvel, they mostly focused on their Marvel NOW series, particularly Uncanny Avengers and All-New X-Men. They had their usual Break Into Comics: The Marvel Way panel, which I went to because Mark Bagley and Dan Slott were going to be there.

Tomorrow is a panel on Marvel NOW, specifically the new series, Superior Spider-Man, and that's what I'm really interested in. I'm a bit afraid of what's going to happen with that, but more on that after the panel.

Also, Dan Slott recognized me by my T-shirt and the fact that I was tweeting #DanSlottProblems during the summer. It was fun.

UPDATE: Turns out the Spider-Man panel is on Sunday. Nothing happened on Saturday, we're ignoring that. Check back next time for almost definite bitching about Spider-Man. THIS IS THE W DEFENDER.
Posted by Walter Sojda at 10:44 PM No comments: