More news from Comic-Con! More specifically: Spider-Man news! Amazing Spider-Man news. One of the things I've complained about is finally being remedied! They are now going to have only one writer, Dan Slott, and the title will now be bi-monthly. Whether this will spawn other Spider-Man titles, like a new Spectacular or Sensational series, has yet to be seen. In any case, the series will be consistent finally
As well as the editorial changes, there'll be a change in attitude, because I guess the writers stopped hating Spider-Man. It'll be more lighthearted in tone, and Spidey might actually succeed once or twice. Also, he'll have some costume changes, like his New Fantastic Four costume. 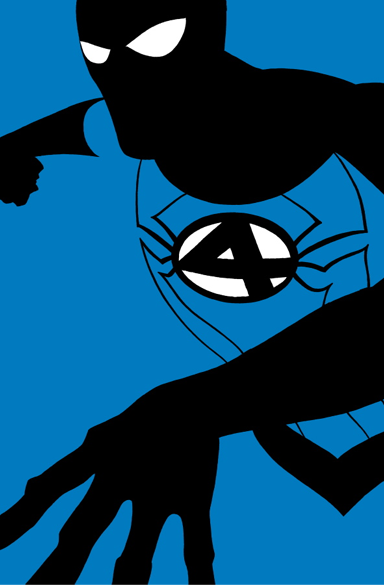 And I'm not sure what this is. I mean, is it Cyber Spider-Man? 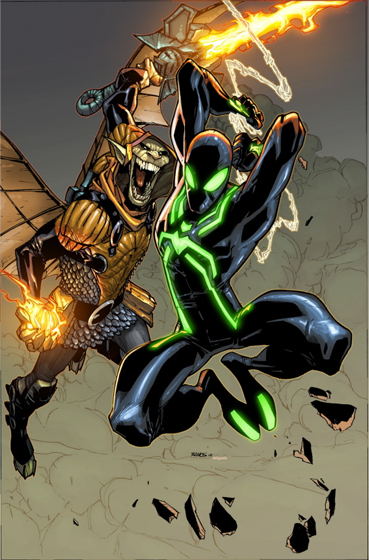 At any rate, this will make things different, so it'll either be real good, or real bad. I'm looking forward to it. I mean, it can't be worse than the Gauntlet, right? ...Right?
Posted by Walter Sojda at 10:44 PM No comments:

Just got back from the comic shop, and you know what that means: Spider-Man! Oh yes. Today we have:

So I haven't bought Spider-Man in a while, partly because I am dirt poor and other partly because they sucked. I decided to pick one up, because, hey why not. To be honest, I expected the worst. Especially since the first issue of the Gauntlet was just plain bad. But, reading it, I got something different.

Anyway, the point of the Gauntlet was, basically, to beat the living shit out of Peter. Not just physically, but to break him down in every aspect. The meta-reason is probably because the writers hate him, but the in-story reason is that the remaining Kravenoffs want revenge on him for making Kraven dead or whatever. Well, him and every other superhero who has spider-based powers and design. Considering the franchise Marvel made, that's quite a bit of people.

Man, Kraven really got busy, didn't he? See, I've never really been a fan of Kraven, or his offspring. I mean, his shtick is that he hunts Spider-Man because... it's fun? I mean, he's really just a Most Dangerous Game ripoff that people seem to love. And it's been done before, the whole "Spider-Man killed Kraven! Revenge time!" I don't even think they're all that interesting, they all have the same jungle-person thing. Anyway, enough of my bitching. ...For now.

We cut to Peter, who, honestly, looks like shit. Both in story, and the art.

He's got swine flu. Yay for out of date references! Anyway, there's a loud knocking at his door, and when he opens it up, we get: Kaine, covered in blood. Kaine is a remnant from the Clone Saga, and he's more or less a degenerate clone of Peter, who has a beard.

At that comment, he decides to go out as Spider-Man, just in time to help Arachne, a former Spider-Woman, from Alyosha and Ana. They get the crap kicked out of them, and Spider-Man starts hearing war drums. After being knocked out, we cut to Kaine, who has a flashback showing that he was beaten nearly to death by Ana Kravenoff, but she let him live because she's a bitch. Spider-Man wakes up at the apartment of Mattie Franklin, another Spider-Woman. Spider-Man and Arachne discuss how they both have no idea what's going on, when we get a dramatic entrance by Ezekiel, another dude with Spider-powers because I don't really care.

Next we go to Madame Web and Maddie Franklin in the Kravens' dungeon thing. This part is actually really sad. Maddie is talking to Madame Web about her upcoming death.

Sasha brings Electro and Diablo, some chemist who acts like it's magic. They use one of his chemicals and a bolt of lightning from Electro on Maddie, as she's stabbed by Sasha. Then something weird happens.

So yeah, that's the comic. It honestly wasn't as bad as I thought it would be. My main gripe is about the villains, who I don't like at all. I mean, the comic was pretty well written, but I didn't like the direction it was going in. Their plan was to completely destroy Spider-Man, and from what I can tell, it was working. Unless he suddenly gets a burst of optimism, I can see him starting to call himself "The Spider" again, and having a 3rd person monologue again, like before the Clone Saga. The art was too gritty for my tastes, and looked too similar to the Electro comic. Well, I can't complain about the writing, just everything else. Which is weird, for a recent Amazing Spider-Man. Anyway, I'll try to get more, just to see how they are. Until next time, this is the W Defender.
Posted by Walter Sojda at 9:32 PM No comments:

Yeah! The final dimension! Awesome! It's probably Spider-Carnage! Or Zombie Spider-Man! Or-- 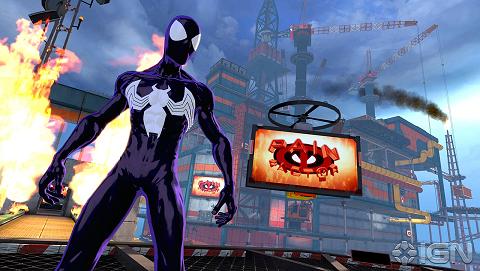 Yeah, the final dimension in Spider-Man: Shattered Dimensions is Ultimate Spider-Man. Only there's a twist, he's wearing the Venom Symbiote. For those who don't know, Ultimate Spider-Man was a separate comic line, remaking Spider-Man's origins in a new universe without the bounds of all those years of continuity. Apart from that, it's more or less the same as Amazing Spider-Man. I mean, he doesn't have any new powers, he's just a teenager, which is why I suspect they added the symbiote.

Thing is with the symbiote, in Ultimate continuity, the Venom Symbiote turns whoever wears it into a monster who eats people. Spider-Man wore it on only two occasions, the first of which was very short, and the second of which was ended prematurely when the Ultimates came to kick his ass because he was eating people. Point is, they had better have a very good reason why he's wearing the suit and why he's not devouring civilians.

In a way, I feel like this is a cop-out. The other two dimensions were things never seen in a Spider-Man game before. Noir, with it's 30's style and stealth-based gameplay, and 2099, with it's incredibly tall buildings you can actually jump off of, are completely new to video games. There's already been an Ultimate Spider-Man game, where you could play as both Spider-Man and Venom. Spider-Man was the same as ever, and Venom was a giant brute who attacked with symbiote tendrils and ate people. Any area not covered there I'm sure has been done in Web of Shadows, where there were two suits to use, and the black suit was primarily concerned with killing everything with giant tentacles and other more brutal stuff.

The point I'm trying to make is that I've done this all before as far as Ultimate is concerned. I've swung through the cel-shaded streets, I've killed stuff with black tentacles of death. I was expecting something really left-field or obscure for the last dimension, since they kept it under wraps for so long. Something like Spider-Carnage or Zombie Spider-Man. I suppose it's better than Amazing Spider-Man with a symbiote suit. I'll have to see how further previews go before I'm able to make another judgement.
Posted by Walter Sojda at 2:19 PM No comments:

Considering I haven't had money to buy comics lately, and I've come into possession of some DC Animated movies, I'll be doing some reviews of them. First one is:

This film is one in a long line of DC animated products, started by Bruce Timm back in the 90's with Batman The Animated Series. After Justice League Unlimited ended, they instead began adapting specific storylines and characters to the screen, using different styles and directors. This specific movie being about Hal Jordan, the Silver Age Green Lantern, who's going to be played by Ryan Reynolds in an upcoming live-action flick.

The movie starts out with Hal Jordan, our test pilot main character, who is suddenly whisked away by a dying alien named Abin Sur, who gives him a super powered green ring, and that Hal will be contacted by the Guardians, leaders of the Green Lantern Corps. Not shortly afterwards, other members of the Corps come to bring him to their planet, Oa. The Guardians don't like him because he's a human, so of course he must be bad. However, one of the senior members Sinestro, offers to train him. Sinestro is investigating the murder of Abin Sur, so he brings Hal along. The man responsible is Kanjar Ro, an alien trying to create a weapon to wipe out the Guardians. Sinestro shows some discontent with the Guardians, and kills a suspect before he can be interrogated. As suspected with a guy named Sinestro, he's actually evil, and working with Kanjar Ro to get a yellow power battery, the only weakness of the Green Lanterns. He murders Kanjar Ro, frames Hal, kicks Hal out of the Corps, gets himself an ultimate yellow power, with a ring and a giant cannon/battery, and proceeds to destroy Oa. As the Green Lanterns get their asses kicked, Sinestro blasts the Green Battery, the source of their power. As all the Green Lanterns that were in space die, Hal puts on a ring, and goes to the deactivated battery. Like all problems, he fixes the battery by punching it until it works. As the only active Green Lantern, him and Sinestro start fighting, there's an epic space battle, and eventually Hal wins. He's a hero and everyone cheers.

The characters are all very good, especially Hal and Sinestro. The writing was one of the best parts, with Hal actually saying realistic things when weird shit happens to him, like his first words when encountered by crazy aliens is "What the hell?" Thing is, there's hardly any spoilers with this movie, because, well, do you expect a red-skinned guy named Sinestro to be a good guy? One thing I noticed was the alien designs, and although there were a few humans plus blank aliens, there were a whole lot which looked very alien.

At any rate, this was a very good adaptation of Green Lantern. If you're a comic fan, DC cartoon fan, or just a fan of Sci-Fi, I'd recommend it.

Posted by Walter Sojda at 5:22 PM No comments: