Books From The Bin: Warpath

I always hear about people who bought books based solely on the cover. I don't think I've ever done that, because books usually cost money. What I do, is get free books based on how bad the cover and the back blurb are. And I want you to trust me here, today we have a doozy.


Books From the Bin: Warpath by Tony Daniel 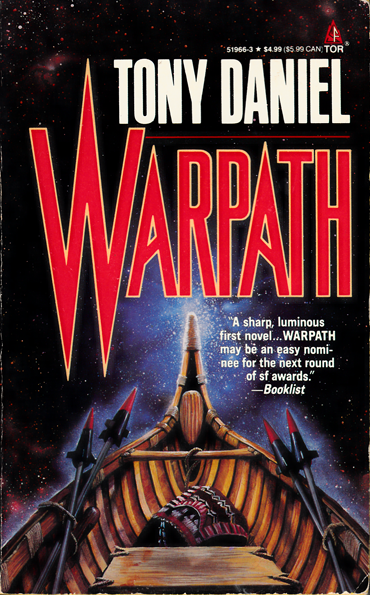 In the far future the bulk of humanity has spread across the galaxy--only to discover that the American Indians got there first!

Long before Columbus, a tribe of Mississippi Indians discovered the metaphysical Effect that makes space travel possible and paddled their birchbark canoes to distant worlds light-years from Earth. Now an interstellar Indian nation, armed with spears and guided missiles, comes into conflict with colonists from a technological civilization so advanced that even their homes and newspapers possess artificial intelligences. History seems poised to repeat itself, but on a galactic scale.

And on the icy planet Candle, only one lonely man stands between the universe and an endless... WARPATH.


Normally at this point I would sardonically remark, "Where do we begin?" But no. This time, there is nowhere to begin. This guy, the author, had a whole bunch of ideas and threw each and every one of them into this book with nary a whim of how they would look fitted together. The narrator is a man reconstituted from a radio signal copy of himself sent off from Earth in the distant past (but our near future). His wife's signal got fucked up so they made her brain control the weather. Some of the (ahem) Indians have holographic animals from another dimension that live in space clay. There's a character who needs to take future-barbiturates or else she makes the people around her melt, and the reason for this power is that her mom got knocked up by one of the multidimensional Pokemon.

Those Digimon are like, the crux of the book too, for some reason. Once a Native has got the clay and has melded minds with their Tamagotchi, then they can actually, literally paddle a canoe into space. The first scene is a character doing just that. After finishing that scene, I quit the book for four years. Upon picking it up again, I found no solace. At one point, the radiowave narrator meets a distant descendant of his original self, and instead of being curious about how maybe his family line is holding up or anything of that nature, he gets really horny because she looks just like his dead wife. And then they fuck.

No, really. And every single sex scene is like if poison could be administered straight to my brain through words. But not to worry, the descendant he fucks turns out to be an evil cyborg with a robot brain, and then Radiohead and his friends fuck up the robot part so she ends up braindead. And just so everything is wrapped in a nice bow at the end, Radiohead puts the child-like mind of his dead wife into the descendant that he'd already been fucking for a month!

Oh god, I haven't even gotten to the Indians. This was not written by someone who cared much about researching Native peoples. I think he thought to himself, "Woah dude, what if spirit animals were REAL?" and then he combined it with every other idea he had written down and figured he knew enough about Native Americans from westerns. Because it really doesn't get any more complex than that. Throughout the whole book, all the Native peoples are called "Mississippi Indians" despite never having interacted with anything they had called "mississippi." They had never even seen Europeans before meeting them in space, and yet there was no effort to figure out what a Native culture would look like had colonization not happened and also space travel. They're just like, slightly mystical and kinda warmongery. Like in a western. The extent of the groundwork this guy did was to watch Dances With Wolves.

Another extra ingredient to this dangerously overloaded plot element sandwich is the AI's that run people's homes and stuff. These are just copies of people's brains, but slightly hobbled so they won't feel bad that they're glorified answering machines. They're actually called "half-sents" as in, half-sentient and nobody has a problem with that existential nightmare. Radio Ga Ga's wife is stuck as the weather and he doesn't think to get her out of there until like, the end of the book. And it turns out it's not even a problem, they just copied a low rez version of the mayor's brain and stuck it in there. Radio Goo Goo doesn't even think of that until right before that, where they go to the ancient Earth most of humanity has left behind and the villain has an evil Neopet that eats AI's. Also it's a giant snake. And then he has a JoJo Stand fight with the main character Indian and his magical bear. And then the good guys win, which is good because otherwise the bad guy would've gotten the, uh. The dirt. The magic animal dirt. God damn it.

Listen, I didn't want this feature to turn into A Woke Look At Problematic Books, but sometimes you read a book about Space Indians and a whole bunch of other shit and then you're trapped inside because of a pandemic but also you're still working a night shift and everyone is curfewed at eight PM so you literally never leave the house except for work and now this book is just sitting there waiting for you and you can't stop thinking about being an AI stuck in a house all day with no way out there's no way out there's no way out

So anyway I'ma give this book like a five out of ten.
Posted by Walter Sojda at 5:00 PM No comments:

I've been playing coy long enough. I covered Operation: mindcrime and called it one of the greatest metal concept albums ever. I even covered one of Ayreon's albums, with just a mention of its long supposed rival metal project. That's right, today we cover the other biggest power metal collaboration project, Avantasia. 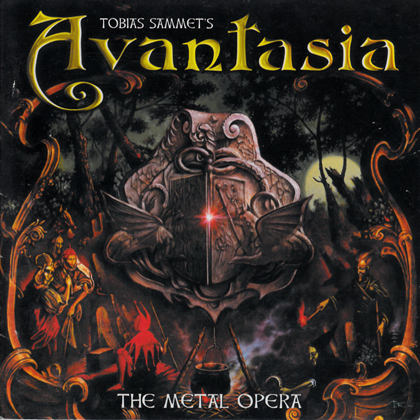 Avantasia is a project created by Tobias Sammet, the lead singer and songwriter of Edguy, a German power metal band. Avantasia released its first album, The Metal Opera in 2001. This and the next album, The Metal Opera Part II share an explicit story, while subsequent releases either had a much more subtle story or none at all. Like Ayreon, this project collects singers and musicians from across the metal genre, though Avantasia has a few distinctions from Ayreon in that department. Lucassen's project, at least in the beginning, tended to feature less well-known musicians, which is commendable for finding more obscure talent. Avantasia took a different route, finding the all-stars of the metal community right out of the gate, even bringing Michael Kiske, legendary singer for the band Helloween, back into his first metal project since leaving Helloween. For a Helloween fan, this was the Holy Grail.

The story is communicated almost entirely through liner notes in the lyric book, and let me tell you, it's a doozy! There are a couple instrumentals with light speaking parts and there's plenty to gather from the music, but I wasn't aware of the whole story until I recently knuckled down and read all of it. You'll understand why in a bit.

Read more »
Posted by Walter Sojda at 6:30 PM No comments: