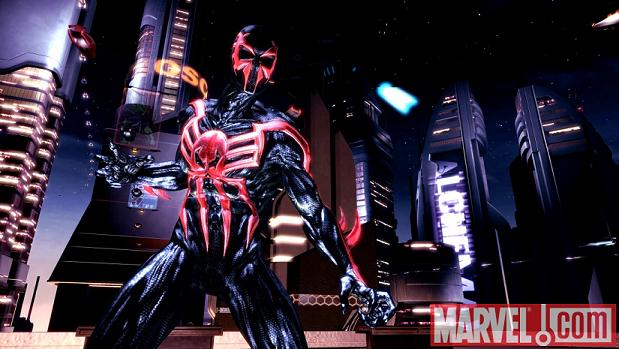 Yesssss! So, Spider-Man 2099 is definitely in Shattered Dimensions. From what I can see, it's going to be in a fancy shiny future that looks like Tokyo. 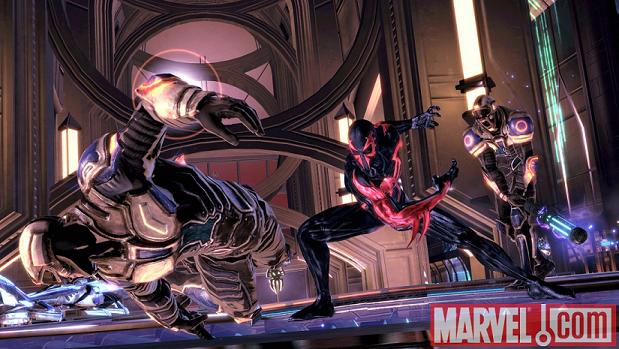 So I got that one right, but the question is: What's the last one? It could be Spider-Girl or Ben Reilly, but that seems unlikely, considering gameplay would be very similar to Amazing Spider-Man. Hopefully they'll reveal the last one soon.
Posted by Walter Sojda at 11:52 AM No comments:

Hey everybody. Haven't been able to update much, because I write reviews, and review materials cost money, and money is what I ain't got. Anyway, in a vain attempt to write anything, I decided to write about a game I've been playing.

Ah, Pokemon. The quintessential monster-collecting RPG. It seems they only release new games in between remakes on new systems. This is one of those remakes, of the Second Generation games, Gold and Silver. Just as those games functioned as direct sequels to Red, Blue and Yellow, HeartGold and SoulSilver are sequels to LeafGreen and FireRed. The plot, just like every other Pokemon game, is simple. You're a youngster who talks to a Professor, is given Pokemon, and is sent into the world to catch all the Pokemon, beat the Gym Leaders, and eventually conquer the Pokemon League. This game is unique, however, because there are two regions to explore, Johto and Kanto. This pretty much doubles the length of the game. Being a sequel to FireRed and LeafGreen, the end goal is to defeat Red, the protagonist from those games, in one final climactic battle.

The best part about Pokemon is that once you've "beaten" the game, there is still so much more to do. This game is no exception. Once you've beaten all the gym leaders and whatnot, there's all the Legendaries you can catch. Not only does it have the Gold and Silver exclusive Legendaries, but those from other generations, such as the chance to catch Kyogre or Groudon from the Ruby and Sapphire games. The sheer variety of Pokemon you can catch in this game is refreshing. I didn't enjoy Diamond and Pearl, partly because new things scare me, but mostly because the gyms were annoying, and I hated the new Pokemon. It got boring. This game keeps itself fresh, and that's not even counting battling other people. There's also a new feature called the Pokeathlon, wherein you can participate in minigames where your Pokemon do all sorts of sporty things, so you can gain points and buy all sorts of fun items.

The WiFi features introduced in Diamond and Pearl are retained here, and just as polished. You can trade and battle online, as well as, interestingly enough, view other battles. There's the GTS (Global Trade Service) wherein you can trade with people from around the globe. It helps if you don't have anyone nearby to trade with and need that one 'mon to complete your team. Another feature kept from Diamond and Pearl is Pal Park, where you can transfer Pokemon from your GBA games to your DS game.

Another new feature I enjoyed was the Pokewalker. With that, you can store one Pokemon to this pedometer, which would then count your steps, and allow you to catch new pokemon or find new items with those steps. Sure, it's a bit gimmicky, but I like it. Especially when I have to walk to class and can get a lot of steps worked up.

Overall, it's a damn good game. The Gold and Silver games are looked back upon favorably, and this does nothing but strengthen that reputation. The improved graphics are nice, and gym leader rematches, as well as Battle Frontier keep things fresh, leading to a lot of playtime. I enjoyed these much more than Diamond and Pearl, for whatever reason. I highly recommend it, if you're into Pokemon and monster RPG's. If you're not, this probably isn't for you.
Posted by Walter Sojda at 5:46 PM No comments: