Hey, you guys remember that movie, you know, the one that came out with the dude in the metal rocket suit? It was right before he was in the Avengers. Iron Man, yeah. That didn't have a sequel. Okay, well, now it did. (There's spoilers if you haven't seen it.) 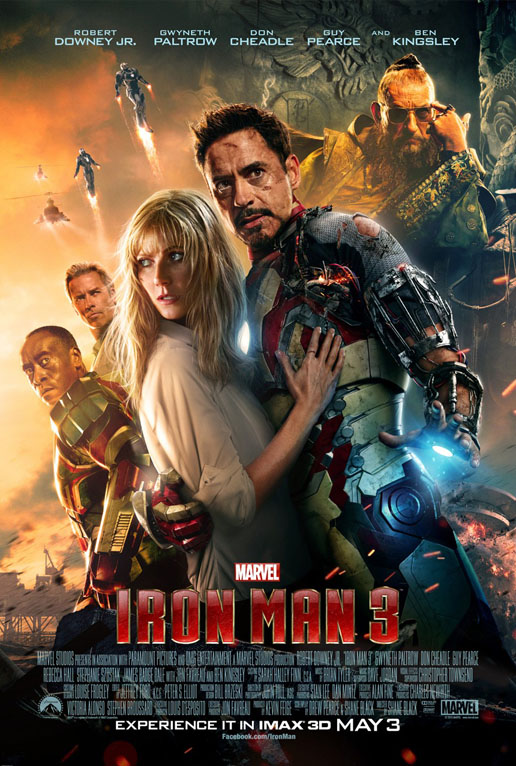 Okay, obviously I jest about there being no Iron Man 2. Otherwise how could we be optimistic about Iron Man 3? Okay yeah let's just start things.

So Iron Man 3 is more of a sequel to The Avengers than it is to IM2. Which makes sense, nobody wanted to remember 2. So we got Tony. Gone is his random alcoholism that appeared in 2, which all the comic fans were waiting with baited breath to see. Instead, we get a Stark with panic attacks. I'm a bit torn on these, because on the one hand it makes Stark's entrance into a world of actual superhumans have more weight, so it actually affected his character. On the other hand, It's like they picked it from a list, and added it into scenes later. By the end of the movie this little subplot never actually gets resolved, he just sort of gets over it somehow by beating the movie's villain.

Pepper starts cool as usual, running the company and shit, and the romance between her and Tony still isn't really played up in here. It's just sort of there, but nothing really happens with it. As far as what happens to her in the movie, it's a little back and forth. At one point she's wearing parts of the Iron Man suit, but then she's kidnapped and scienced-on, then right at the end she's badass for a second, and it's over. I mean, they barely avoided the Women-In-Refrigerators thing with her, but for a big chunk of the movie she's just sort of strapped to an upright table. Neither of those is what I'd like for Pepper, considering she's best as the competant businesswoman who happens to be dating Tony. My problem with this is the fact that when people try to make "Strong Female Characters" they tend to always go for physically strong, and by this point that's a tired concept. (CoughDarkKnightRisesCatwomancough)

The villains. Firstly there's the Mandarin who (SPOILER ALERT) was an actor the whole time. On one hand it kind of makes sense, because the Mandarin makes no sense. On the other hand, it's kind of lazy, seeing as how they could just throw anything at him and be all "WELL HE WAS FAKE SO WHATEVER HA HA HA." Not to mention the whole thing seems a little too Dark Knight Rises for my tastes. You know, he's Bane, the villain that has no motivation, and then Dr. I Don't Remember Her Name is like Talia, in that she acts friendly but is all evil later.

Killian, the real villain apparently, really didn't make much sense to me. I mean, yeah, he wanted to bang Pepper, but seriously, he was all buff and hot and stuff, don't you think he would have moved on by that point? And I'm a little confused about his logic with stuff. So, in his secret research facilities, people exploded, so he decided to make people explode in public places, Then he made up the Mandarin so the Government would have someone to blame for the random explosions he caused. ...Then... Profit? I mean, yeah, he was looking for a government contract, but it seems way too elaborate for that. You would think if he blew the hell out of a dude's house with helicopters and then kidnapped the President, it would make it a bit too easy to find the people that did it. I don't get where he was going.

War Machine, er, Iron Patriot was fine. I mean, he didn't really change too much, and I guess he helped Tony instead of punching him, so that works. The problem was halfway through the movie when we get Small Town Time with Anakin Skywalker. That was pretty annoying,

I expected a bit more out of the whole Extremis thing, like I thought it would tie in more with the whole Super Soldier thing that was in Captain America and The Incredible Hulk. It just sort of happened, as a random bad thing independent of the rest. I really thought, at the very least, Killian's motivation would be for the human race to survive in a world with Gods and Hulks. Without that he felt pretty shallow. If anything this movie suffers from trying to be both really on its own and really connected to The Avengers.

So overall, better than Iron Man 2, not as good as Iron Man 1. It was like Avengers in that it was a pretty good ride, but didn't really have much depth to it. The scene with a billion Iron Mans is probably the most memorable one, but who knows what else you'd remember. It's still worth a watch, especially if you've suffered through Iron Man 2. So until next time, this is the W Defender.
Posted by Walter Sojda at 5:36 PM No comments: