Concept Corner: Fist Me 'til Your Hand comes Out My Mouth

There's a band I've been listening to pretty frequently for the last few years. It's not one I talk about very often, because it's not like a lot of the other bands I listen to. As you're likely aware of, I like to talk about Power Metal, the bombastic, over-the-top genre that tends, more often than not, to be really fun. But with much of the other music I listen to, it's more difficult to talk about, because it's much more personal. That, and even describing the genre can be a chore. I'm talking about my Sad Music. That stuff I'm sure we all listen to when we're feeling low, the music that speaks to us in our dark times.

For some, it's The Mountain Goats, others, it's Brand New, for me, it's been a little band called Crywank. Crywank is a band formed in 2009 in Manchester, UK. Their genre is nebulous, but best put as "anti-folk" or punk-folk. That pretty much means they take the folk aesthetic with a punk mindset. Usually little more than an acoustic guitar and drum kit, but mostly about the things in life you hate, including yourself.

If you could take a look at my drafts (please don't ever do that) you would see quite a few prospective articles I've began about Crywank. It's not easy to put into words just what I like about this band without embarrassing myself. Hell, the name alone makes everyone I tell it to do a double-take. And to be honest, what they've been doing, and what their appeal is to me, has been changing with each subsequent release.

In their first few albums, it's about what you might expect from a self-pity band you might listen to after a couple too many drinks alone on a Saturday night. That's not to say they didn't do that exceedingly well. Songs like Hikikomori and You Couldn't Teach Me Integrity still resonate with me, and even in these albums there was something a little more than the sadcore fare I was used to. The themes are less "The World is Bad and I am Sad" and more "I am sad because of my internal problems which I can only identify." It's a more introspective sort of pity party.

As the albums go on, the introspection becomes the point. With Don't Piss On Me, I'm Already Dead the focus shifted from how sad one is, to the flaws one has that cause them to be sad. It's overthinking their overthinking. Being sad about being sad. It's a rabbit hole I've traveled down more than once, and it's one of the only albums I've seen that contained a song like I Am In Great Pain, Please Help Me. And I haven't seen a song about writing quite as potent as Me Me Me (Boo Hoo), a personal favorite.

Egg on face. Foot in mouth. Wriggling Wriggling Wriggling. goes in a more metaphorical direction, with much more upbeat tempos, making some of the songs a bit difficult to parse. It's got quite a few more songs than previous albums, and covers a bit more ground. These songs combine criticism of others with the blowback of self-hate you get when you realize you're hardly in a position to judge anyone, or if it's even worth it to bother. An Academics Lament On Barbie is one that hits personally, for reasons I'm sure you're aware of.

Their penultimate album, Wearing Beige On A Grey Day shifts back towards less, but longer songs, and takes on a more structural theme than previous albums. What about society causes us pain, and what do you even call the pain you feel? Doubt comes up with a non-answer that resonates, and Unassimilated Normie looks at how societal standards make us into cowards.

That's all to say, Crywank is a band that's been evolving since Day 1. And their newest and final album is no exception. Fist Me 'til Your Hand comes Out My Mouth is only part concept album, with numbered parts to the story like The Near Future, but the whole album adheres to the themes presented in the first half.


Concept Corner: Crywank - Fist Me 'til Your Hand comes Out My Mouth 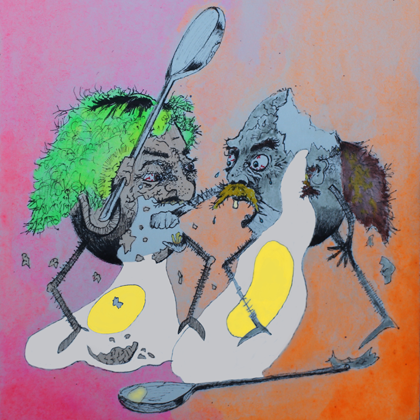 The first thing I can say about this album is that it's Crywank trying a bunch of things they've never done before, but at the same time it's so fundamentally Crywank. Fist Me is an album about what it is to be in Crywank. I don't mean what it's like, as if it were something you had to interpret. It's just about Crywank. The previous albums were all about James Clayton, the usual songwriter and guitarist, but to make the album about the band itself is just more Crywank than Crywank has ever been. Songs were either written by Clayton, Daniel Watson, or a collaboration between the two, and more often than not are openly antagonistic against one or the other.

Imagine traveling the world with someone whose issues are increasingly caustic to your relationship, while singing songs about your most shameful moments over and over again. What began as catharsis turns into a needle in your side, you've made all your songs about yourself and now you can't escape who you were. It's like the dark inverse of when a comedian becomes successful and all their jokes become about flying and travel. Crywank, itself, is the issue. The subtitle of the first section is, "I Love You But I've Chosen Me" which could be from either of the bandmates referring to the other, or both of them to the fans.

It's the first Crywank album that really takes you on a trip. There are a few songs that are just instrumental, and some with only spoken lyrics. They were writing and recording these songs while on the road, so they end up having variable sound qualities, even though almost all the song lead into one another. But the overall effect of these is to impart the feeling of being on tour. And that tour being not great.

Musically, this is definitely a step forward, boasting the most similarities to Egg on Face though retaining the Trombone added in Wearing Beige On A Grey Day. There's some club-music bass pounding, there's harmonica, there's even some theremin in there, as far as I can tell. It's experimental, it's fresh, and it's certainly not something I would have expected from Crywank a few years ago. I should've expected it, but I didn't.

Fist Me 'til Your Hand comes Out My Mouth is Crywank's breakup album. This is their last, and would've come at the end of their farewell tour, if a pandemic hadn't fucked it up for them. You never get this close a look at a band splitting, even if there ends up being coverage through music publications later. They made art about making their art, an idea so self-consciously up its own ass I can't help but love it. If you listen to Crywank's records from the beginning (which I suggest you do) you can see the evolution and dismay of someone who started writing sad songs after a breakup, but made it so much more. I'd be lying if I didn't claim to be a bit disconsolate at Crywank ending, but nothing lasts forever. If there's anyone who could have created something in the midst of and about a disintegration, it's Crywank. The album is out now, so you can buy it for yourself on bandcamp.

Posted by Walter Sojda at 4:57 AM No comments: