Coming as a complete surprise to me, Venom's the talk of the town! After the recent film, which I didn't think was super great, and a few new series Marvel is putting out, one of which put the symbiote back on Brock, people actually know who he is again. Who would've guessed anyone would still care about a giant buff goo-man with sharp fangs and a slobbery tongue? Well, anyone aside from me. I always cared. Even when he was stupid. Especially when he's stupid. Like this. 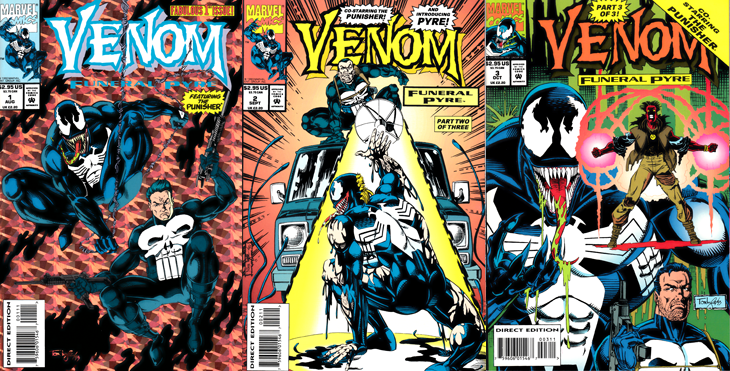 Funeral Pyre is yet another of the Venom limited series that took place after Lethal Protector. These were a bit of a mixed bag. Obviously I love Lethal Protector, but you get stuff like The Madness as well, which... you know. Funeral Pyre falls along the latter side of the spectrum, though it still holds a special place in my heart.

We begin on the rough and tumble streets of Oakland, near Venom's current stomping grounds, as a gang called the... Jadoo are terrorizing people for no reason at all. One of their prospective members seems less than thrilled with the situation. 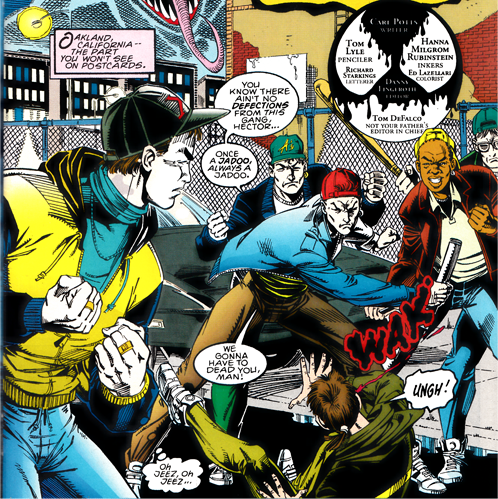 After they go chasing some old guy and his nephew with no aim in sight, the new guy saves the kid and sends him for help. Who else does the kid go to but somebody no one should ever ask for guidance. 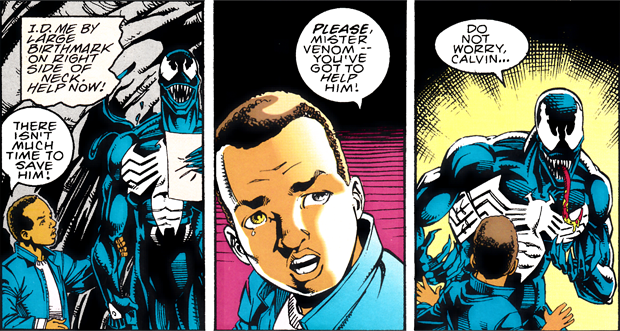 Turns out the new member is actually a journalist, investigating old HYDRA labs in California, one of which happens to be the base of Jadoo. Gray, the journalist, decided to join in order to check out the old lab, but now he needs to kill someone to be initiated, or be killed himself. You know, boilerplate gang stuff. Rescuing him is easily within Venom's purview, as long as someone even more unhinged doesn't show up and ruin everything. 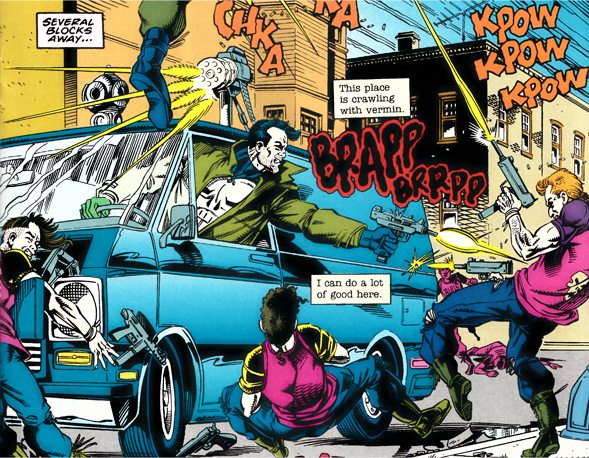 So instead of everyone fleeing to their homes and calling their mothers, the Punisher's arrival somehow sparks a gang war. In the first of many distractions, Venom briefly fights the Punisher before he remembers he has shit to do. Back with JADOO, Gray explores the hideout and finds the old lab, still operational after all this time. 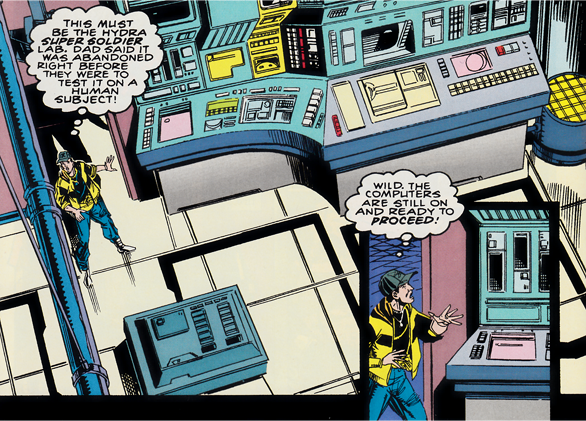 No time for that though, because there's a gang war on! Back with Venom, he's had no luck finding Gray, but he does find Punisher, who quickly hits him with a sonic beam and traps him in a jail cell. In the next issue, using a tendril of the symbiote, he breaks free and starts punching Punisher's van. 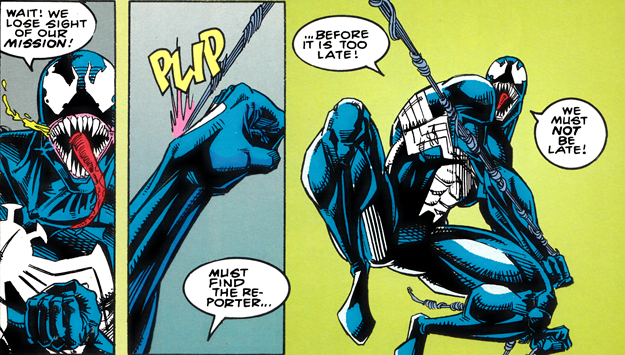 Gray, however, is having a poor go of it. 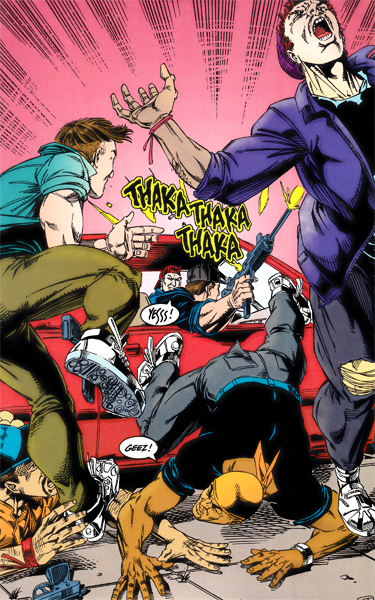 Having committed murder, Gray falls into despair. But now Venom's free, and with the skills he garnered as an investigative journalist, I'm sure he'll be right on Gray's trail in no time!

So his strategy is to talk to everyone still alive in town and just ask them who has a birthmark. Or just grab people at random and see if they have a birthmark or not. 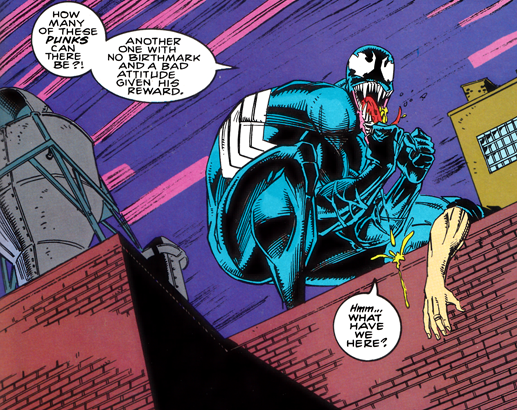 Given that this is not the best canvassing method, Venom takes longer than the Punisher to find the Jadoo HQ. The Punisher slaughters his way through, forcing Gray into the HYDRA lab, specifically the testing chamber. 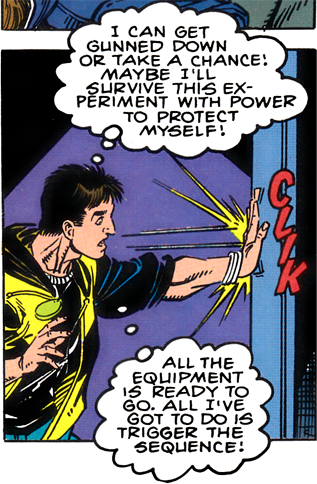 He pops out glowing red and real mad. Last at the finish line, Venom finally arrives at the lab, but not to a warm welcome. 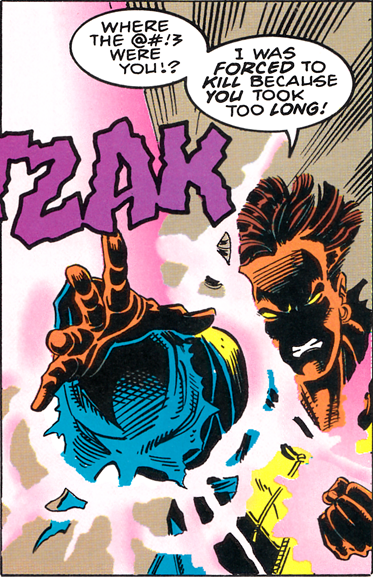 As the final issue begins, Pyre, as he's now referring to himself, zaps Venom and Punisher with microwave blasts, which cook Venom like a frozen mac and cheese. They fight for a bit, with Pyre being a little bit unreasonable assigning blame. I mean, he did join a gang with no plan. It's not Venom's fault he's an idiot. The Punisher tries to nullify Pyre's power with "anti-waves" but it doesn't work. 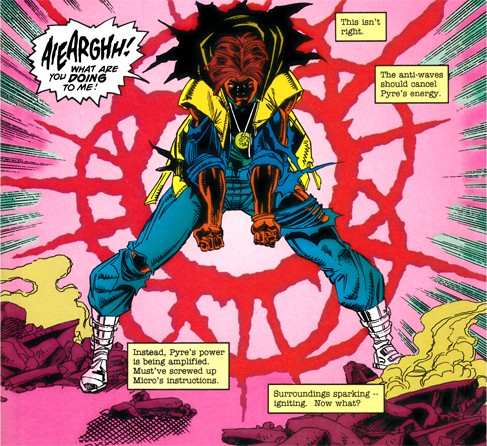 After Venom pins him down with some equipment from the ceiling, Pyre decides to just burn the whole place down. Long story short, Venom and Punisher escape and Gray, after having committed murder and mutated into a superpowered red guy with 80's hair, probably dies. What's Venom's takeaway from all of this?

I think I'd call it more an endless stream of incompetence from everyone involved, but you do you. What's important is: dozens of people have died and nobody is ever going to be held accountable. And Pyre will never be seen again. Great job, Venom!
Posted by Walter Sojda at 10:36 AM 2 comments: 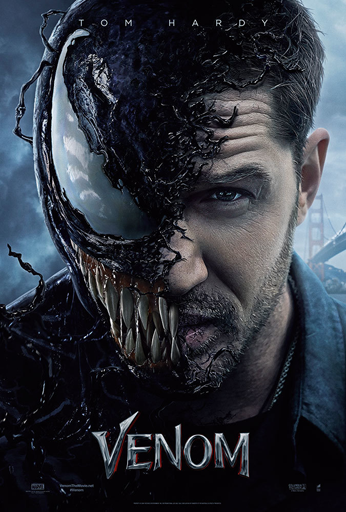 I'm almost unsure what to say about it. Going in, I was sure it would be the second coming of Catwoman, some weird, zany, tonally dissonant film where I would laugh the whole time. That's only, maybe, half true?

The film starts with Eddie Brock, investigative journalist, who fucks up really bad and gets fired from his job and dumped by his fiancee. There's no Spider-Man involved, which we all saw coming, but what they did doesn't really add up. It sort of skips right to the part where his life is ruined because I guess you need that to be Venom, but it didn't lead anywhere. If his life had been going fine when he found the symbiote it really wouldn't have been much different. The villain, Carlton Drake, gets symbiotes from space. Somewhere. It doesn't matter. Brock gets ahold of one and doesn't so much become Venom as the symbiote, this time just named Venom, uses his body like a puppet.

I don't really get Brock's character. Through the whole film he doesn't have any agency, he's either being taken somewhere by the evil guys or being puppeted around by the symbiote. He's more or less a bumbling idiot through the entire film, being dragged this way and that without doing much on his own. There's no character arcs to speak of, except for maybe Venom (the name of the symbiote, I must reiterate, not the character of Brock and the symbiote together) who starts out evil and then at the end of the film... isn't.

That's how a lot of things in this movie go. The symbiote is harmful to wear until it isn't. The villainous symbiote just pops out of nowhere for the fight at the end. Venom wants to fight the evil symbiote at the end, despite never having mentioned it. The evil guy has very nebulous reasons, involving global warming and overpopulation, for everything that he does. Does Eddie ever actually get control of the suit? Is host compatibility important for who can wear a symbiote? How did the symbiotes survive in space? The film just doesn't seem interested in answering these questions.

There was a lot of talk earlier this week about how Tom Hardy said his favorite parts of the movie were cut, and I think it's pretty noticeable when you watch it. The bits that had a rapport between Brock and Venom were enjoyable at times, but there just didn't seem to be enough of them. Would it actually have improved the film? I dunno. Once bonded, Brock just acts like a lunatic, which I'll admit was pretty funny whenever it happened. The thing is, I have no idea if the humor was intentional. Nobody else was laughing when Tom Hardy dumped a bag of frozen tater tots on his face, ate chicken from the garbage, and vomited.

The action scenes were okay most of the time, with the symbiote being used in creative ways that I liked, but the final, like so many other superhero films, seemed to come out of nowhere. You never learn about the relationship between Venom and the other symbiotes, and then they fight. It was really hard to follow, when two very similarly colored piles of goo splat across the screen you can't really get a good grasp of who's doing what.

It's just so difficult to call this a Venom movie when it had very little to do with the classic Marvel character. It had nothing to do with Spider-Man, very little of Brock and the symbiote working towards the same ends, and none of the usual hatred and bile Venom usually comes with. Brock had little to no motivation for anything he did, and neither did the symbiote. Most of the movie was them trying not to be blown up by exploding drones.

It's hard to have a strong opinion of this movie, because there wasn't a lot going on. Tom Hardy as Brock is more funny than anything, which is weird when you consider the character he was supposed to portray. Venom, the symbiote, also voiced by Hardy, is evil, but then he's not, and the changes don't have any drive behind them. Venom and Brock never really agree on anything, there's no point where they both work together or become one character, like comics Venom. Things are one way until they aren't anymore. Did they just cut a lot from the middle which would have added these things? I'm not usually a guy who roots for longer movies, but a 190 minute runtime might have been better for this.

I'm not certain this will get a sequel, what with Sony being very tetchy on sequels if the film doesn't do super well, but I can't help but think a sequel could be better. You have all the groundwork laid for the symbiotes so they could actually work on the relationship between Venom and Eddie. Of course, it's been said the plans are for a Symbiote Movie Universe, in which case, please no.

Soooo... was it bad? I dunno. If anything it was just stupid. Things were brought up and dropped without mention, it seemed like nothing happened even though certainly something must have. It wasn't necessarily a mess, but it never came together. I either expected more, or a whole lot less.
Posted by Walter Sojda at 1:26 PM No comments: