Following my last comic review, Dark Avengers, I decided to review something a little older, starring one of my favorite characters, Venom. 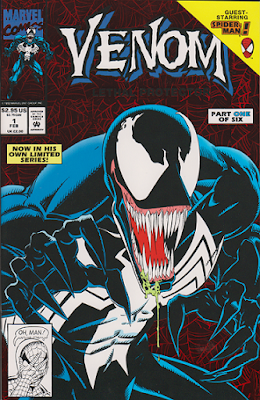 This takes place after Amazing Spider-Man 375, where Venom agreed to stop trying to kill Spider-Man, if Spidey let him go. Spider-Man didn't really have a choice, so Venom goes to San Francisco where he used to live apparently. This is drawn by Mark Bagley, my favorite penciler for Spider-Man, and written by David Michelinie, who wrote for Amazing Spider-man at the time. The comic opens with Venom killing a random mugger as he's about to do unspeakable things to the victim of his mugging. Venom then gives her back her purse, leading to what is quite possibly the best three panels ever. 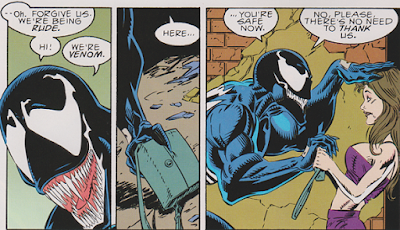 Indeed, how rude of him.
Anyway, the cops later see him and try to arrest him when he tries to book a hotel room. A tourist sees him and takes a picture, which is then later seen by none other than Peter Parker! Peter then goes on the flashback Venom's origin, because back then there wasn't wikipedia. Violating his deal, Spider-Man goes to San Francisco to try and catch Venom. Meanwhile, Venom is homeless, and beats up some suited people beating up hobos. Spider-Man just happens to come by at this exact moment, and punches Venom under the pretense that Venom is assaulting the FBI or similar organization. That leads to this exchange and another candidate for "Best Panel in This Comic" 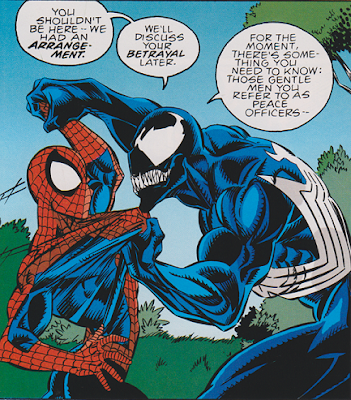 Then the men in suits pull out guns. Spider-Man, dodging the bullets, doesn't notice that Venom and the hobos disappear until it's too late. He basically says a "Well dammit." and swings off again. We then see some foreshadowing with this random business guy holding a picture of his son, telling some guy on the phone to assemble the squad.
Then we find Venom and the hobos in an underground tunnel, which apparently the homeless people live in. After explaining that the fancy dressed people were hired by this guy named Roland Treece, The hobos come upon these giant mechanical suits (Called "Diggers") owned by none other than Treece. Anyway, they attack, Venom beats the crap out of them until one of them uses their "Sonic shovel." A sonic shovel? Seriously? Why does everyone Venom face have to have some sort of sonic weapon that makes no sense?

Anyway, the floor caves in, and the digger and Venom fall through a pit. Then this happens: 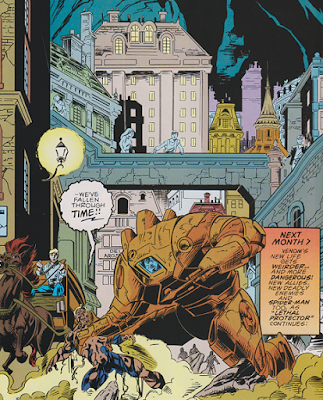 Wait, what?
So yeah, that's Venom's first solo comic, and I love it. The art is awesome, drawn Mark Bagley. Then there's the dialog. The writer did a kickass job on this, and for a few reasons. The constant recapping in the beginning almost sounds natural, the explanations are never too long or tedious, and the way Venom talks is almost... poetic. I think this is mentioned later by saying he was a journalist and that made him talk awesome or something, but whatever he says not only sounds very dramatic, but every sentence is like a short speech.
Well, that's all for now. I'll probably get through the other six issues in one other blog post, so I don't spend the rest of my life talking about the comics I love. Next up on the W Defender, Venom: The Madness! Stay tuned!
Posted by Walter Sojda at 1:51 PM