Once again I have succumbed to the siren song of cheap novelty pizza. I am but a man, and like the Greek heroes before me, I have a tragic flaw. That flaw is the irresistable compulsion to seek out and purchase any terrible pizza I have seen an advertisement for after the hour of 9 PM. That brings us to today's subject. Little Caesar's Pretzel Crust Pizza. 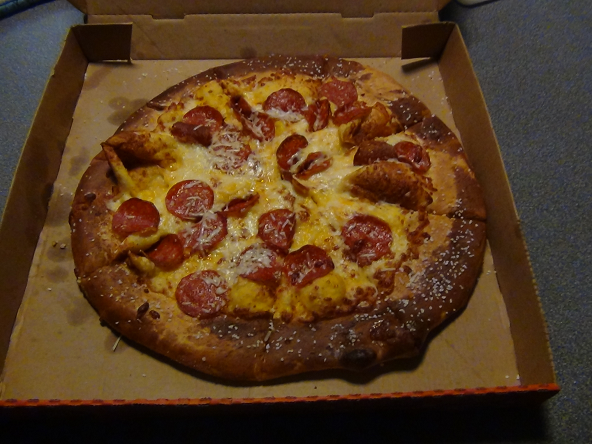 Unlike Pizza Hut, which has little to say about its relative quality, and Domino's, which is constantly attempting to prove that it is, in fact, a legitimate pizzeria, Little Caesar's has a different tactic. Little Caesar's main selling point is that one can obtain said pizza for a measly five dollars without ever leaving the comfort of one's car.

Some would have you believe pizza is meant to be comsumed in a sit-down environment, where your family can discuss the day after waiting 20 minutes for your custom-ordered delicacy to arrive. Little Caesar's, however, does away with any of that pretense. When you drive up to their boxy establishment, you are greeted immediately with a prepacked, premade, and utterly standard pizza. When you pay five dollars for a pizza there, you get exactly five dollars worth of pizza; no more, no less. Little Caesar's is the kind of pizza you are meant to eat alone.

So now we come to the main attraction, the Pretzel Crust Pizza. The main selling point, apart from the titular crust, is the replacement of the tomato sauce with a nacho cheese, similar to what one may find appropriate to dip a large pretzel in. My colleague was relieved to find the toppings kept from swimming in an overabundance of this sauce, while I was quietly disappointed.

All in all, a quiet disappointment is the prevailing sentiment this pizza creates. For all its bluster and pride, it does not seem to differentiate itself from the standard fare. The welcome lukewarm embrace of the unremarkably familiar tomato sauce is usurped by an even more underwhelming cheese. The crust you came to impersonally tolerate is tinted brown and covered in large chunks of salt. 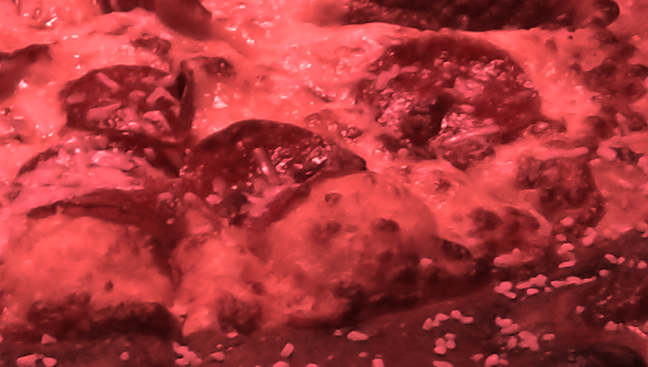 Caesar's strength has become its weakness in this offering. This pizza is a paradox, an attempt to make an interesting pizza from a factory fitted only for the unexceptional. Cheap pizza gimmicks are a younger pizzeria's game. It seems Little Caesar's has forgotten the true purpose of its pizza: To be eaten slowly, grudgingly, lit only by the solitary glow of a computer monitor. This was the platonic ideal. This was PIZZA.
Posted by Walter Sojda at 4:05 PM 3 comments: