As the prophesy foretold, yet another iteration of Spider-Man looks like it's going down the drain. As Deadline reported and not a single person is unaware of now, the deal between Sony and Disney to share the film rights to Spider-Man has ended. In broad strokes, this means no more Spider-Man in the Marvel Cinematic Universe, which, more than anything else, I think is pretty funny.

In an uncharacteristic move, I never ended up publishing reviews of Spider-Man: Homecoming or Far From Home. By the time I collected my thoughts on Homecoming, it was a little too late for anyone to care, and Far From Home had the whole "ENDGAME SPOILERS OH NO" problem. So for the sake of context, here are my thoughts on those two films as a whole.

They were okay films, certainly nothing outrageously wrong from a filmmaking standpoint. Like a lot of Marvel movies, they were fine. Nothing fancy in the mechanics, like camera work or style; if you've seen a Marvel movie you know what I mean. But as Spider-Man movies, they were not good. Spider-Man as a character lost much of what he had in the comics and other adaptations. He was like a sidekick, more or less, trying to impress Iron Dad in Homecoming, and taking orders from Fury to become Iron Boy in Far From Home. Everything that made Spider-Man special and important to me didn't survive the transition. These films felt more like Iron Man 4 and 5 than a reboot of Spider-Man. Where was his independent nature, his man-against-the-world struggle? Where was the working class perspective on this superhero nonsense? All gone. He was provided everything he needed by a rich man, even after said patron died. They even went so far as to homage the first Iron Man in Far From Home, as if to say, "Don't worry everyone, we have a new Iron Man." Spider-Man is not Iron Man. Not even close. I'm honestly surprised that distinction needed to be made more than once, like everyone didn't figure out it was a bad idea after Slott's Parker Industries comic run.

That's not even mentioning the supporting cast, which I found either annoying or superfluous. Each one is named after a legacy character, like Ned Leeds or Flash Thompson, but bears a shallow and mismatched resemblance to their namesake. Flash is a mathlete instead of a football player, but he hates Peter Parker and loves Spider-Man anyway. MJ is a counterculture misanthrope with one tone of voice, but her and Peter fall in love anyway. Ned is just Ganke Lee from Ultimate Spider-Man. As I've detailed before they all seemed scattered, unable to be the characters we know, but not allowed to be different ones either. It was frustrating in a way only someone who obsesses about Spider-Man can understand.

Hopefully that provides some context for when I say: I'm glad this Disney/Sony divorce is happening. My article railing against it in the first place was astonishingly accurate. I just didn't call that Spider-Man would replace Iron Man. He did just sort of appear with little explanation, and they had to change that iteration so much he was barely recognizable. Suffice it to say I disliked the direction they were going with him. The Sony-only venture Into the Spider-Verse was such a massive triumph that it almost washes away Amazing Spider-Man 2. Even the first Amazing Spider-Man was a good movie, and I will die on that hill. Everyone seems adamant to point out that Sony has a terrible track-record with the character, but I like all of those films more than the Marvel ones. Did we all forget Raimi's Spider-Man 2? Spider-Verse proves that Sony can go weird with it, which as far as I'm concerned is worth way more than another boilerplate Marvel film. Maybe someone could actually take some risks again, instead of dipping their toes in the water but ultimately playing it safe. Either give me Flash Thompson, or don't, none of this halfway business.

Not to mention Disney losing a property should be seen as a win by the great mass of moviegoers. Is anyone else terrified by the complete hegemony Disney has over the entertainment landscape? Marvel, Star Wars, classic Disney canon, and they just keep getting more, what with the Fox buyout that occurred recently. They recently released the lineup for Disney+, one of the many many streaming services about to release, meant to desperately claw for a piece of that Netflix cash. It's almost as bad as the Phase III plan they announced back in 2015. But the twist is, that's just one of the franchises they own! There's a separate one for Star Wars, for classic Disney properties, the Simpsons, they even got the goddamn Muppets. Nothing else illustrates in such stark detail the stranglehold Disney has over a wide swath of once-independent properties.

I have very little faith that Deadpool (a film nearly universally beloved) could've been made if Disney owned the character from the beginning. How about Logan? A sequel to a family-friendly franchise, instead rated R and living up to every inch of that rating. Could we ever get an R-rated Avengers film? This isn't how Disney works. Kid-friendly to a fault, and despite making billions of dollars they play it safe time and time again. I'm glad at least something I enjoy isn't eaten up by the conglomerate that thought The Last Jedi was a good idea.

Is Sony going to continue casting Tom Holland? Will they just reboot the whole thing again? Who knows! The only one here we can really pity is Tom Holland in the event he's recast, but then again, nobody really shed a tear when Andrew Garfield got fired. Somewhat troubling is the notion that this might foretell a film version of One More Day, where Mephisto shows up to undo Spider-Man's identity issues, and maybe make everyone forget he exists entirely. At least this time the retcon would work for me. I'm glad I have no idea what's going to happen! I'm sick of superhero movies being the equivalent of the constant tiresome crossover events in comics!

Then again, this may all be a moot point. There's always the possibility of new negotiations, nothing's set in stone. Obviously at this point you know I'd be disappointed if this was reversed. We'll just have to wait and see what the full implications are to this, but I'm a Spider-Man fan, this ain't my first reboot, and it won't be the last.
Posted by Walter Sojda at 12:42 PM No comments:


Can we change who we are? Are our inner selves immutable, subject only to forces beyond our control? We can try to influence our own development, foster traits we find desireable, but we must realize our efforts may all be for naught. Our darkest impulses can lurk beneath the surface resisting all attempts to rectify them. However, we are human beings, graced with consciousness and sapience, surely we can identify the parts of ourselves we want to expunge and change ourselves accordingly. It has to be possible, how else can we expect to muddle through the eternal struggles of this constant mistake we call life? I can't let my past dictate my future and continue to fuck up the same way over and over again. So why?

Why can't I stop?

Barbie™ is a cosmic princess who flies high on her hoverboard through a far-off universe with her adorable and devoted pet sidekick, Pupcorn. One day, everything changes when the twinkling stars start to dim and slow their dance in the sky. Barbie™ travels to a beautiful new planet to join a special rescue team on a mission to save the stars. Once there, she teams up with a group of talented new friends who work together to save the galaxy through exciting hoverboard adventures. Barbie™ soon discovers that if she listens to her heart, and with the help of her friends, she might be the leader the whole universe has been waiting for!

I need someone to tell me. Does that sound like something you would want to watch? I was ready to buy this before I saw the word "hoverboard" and even after I saw the word "Pupcorn." Nothing stopped me, especially everything that should have. This isn't even remotely marketed towards me! What went wrong?! I am frightened of the decisions I can't prevent myself from making! 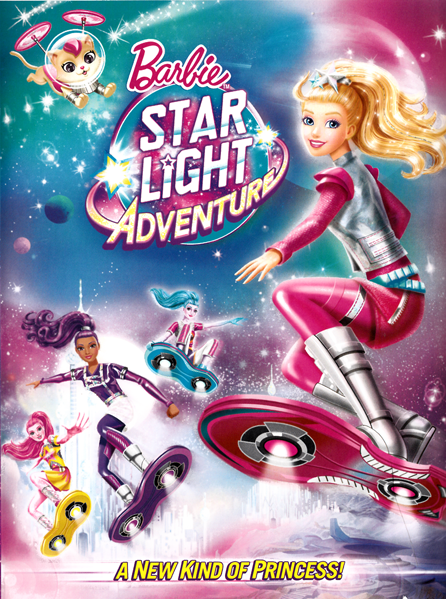 Read more »
Posted by Walter Sojda at 2:42 PM No comments: