We're back, with the next part of our ongoing series of Oh God Anti-Venom Why Does He Exist. If you have no idea what I'm talking about, check out the previous installment. (Also known as: I Told You That Story So I Could Tell You This Story) So yeah, Anti-Venom. That started. Venom and Anti-Venom just start beating the shit out of each other in the middle of the shelter, so Li leads May and the hobos to a safe room. Spider-Man swings in at that moment, but he really shouldn't have. 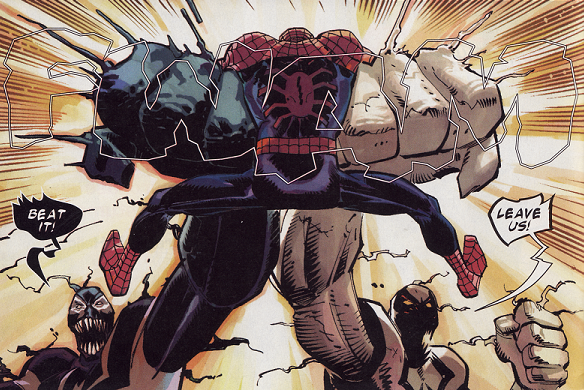 That was the dumbest panel I've ever seen. Until this one. 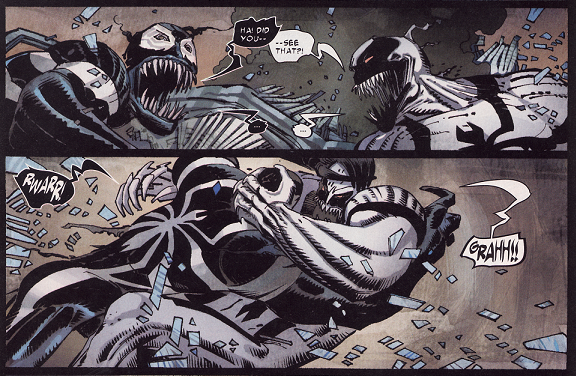 Okay, okay. Let's get back to Osborn. Maybe that won't be so dumb. 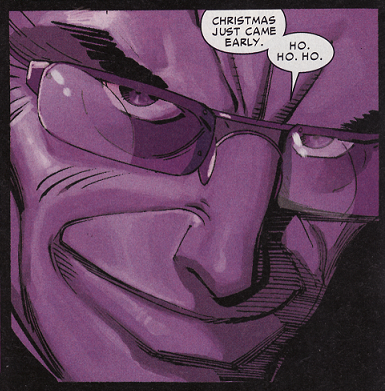 Oh look! Menace! I... I can't believe that's almost a ray of hope at this point. She blasts into Bill Hollister's office, knocking out a wall. She tries to tell Bill something, but he's unconscious. As she tries to rouse him, the police show up, so she flees. Wait no! Don't go! With you gone it's back to-- 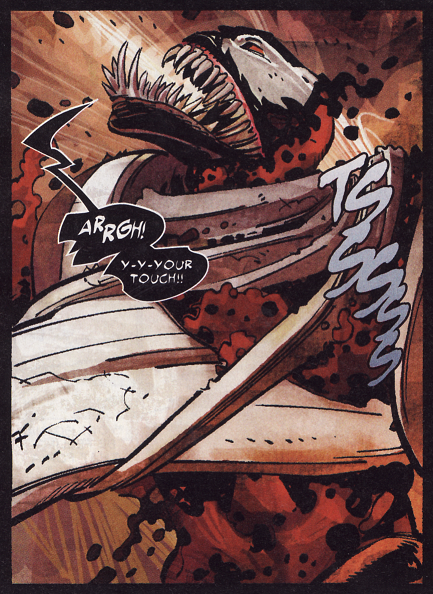 That panel got past a writer, an artist, and like, 4 editors. Let that sink in.

Anyway, Eddie throws a car which ends up flying towards some dude, who Spider-Man saves. Thus, we get a rehash of a thing that happened like, 200 issues ago, where Eddie Brock decided Spider-Man was a pretty okay guy when Spidey saved his ex-wife. That leads to a teamup between Spider-Man and Anti-Venom, then this: 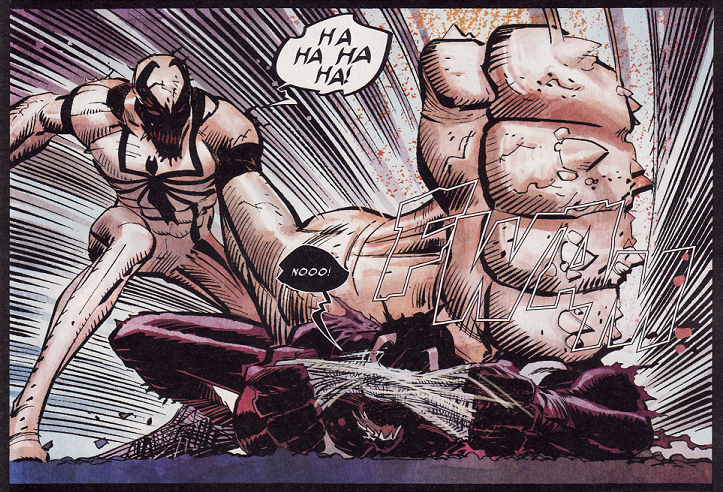 As a result of this, it looks like Anti-Venom destroyed the symbiote, which, when it comes to Gargan, is probably a good thing. But then he decides to "cure" Spider-Man. 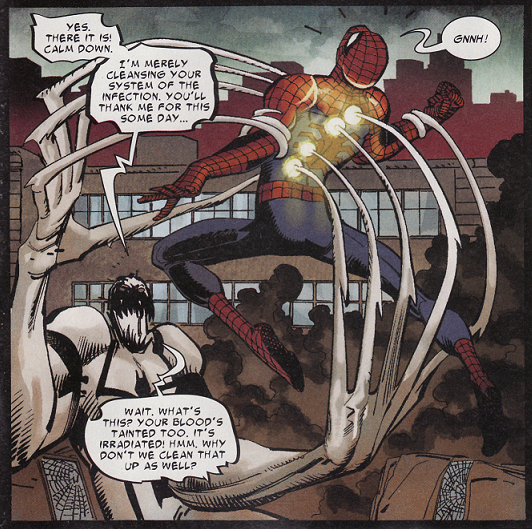 We end with Menace meeting up with Osborn.

The next part starts with, in case we forgot, more of this. 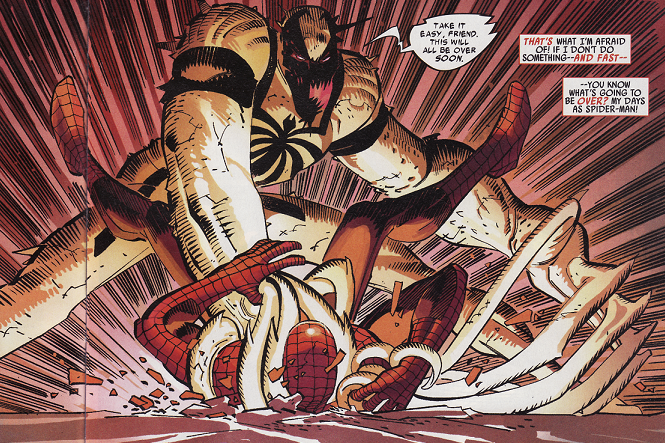 The Feds show up to retrieve Gargan, and they try to kill Anti-Venom. They use a combination of fire and sonics, which ordinarily would take down a symbiote. Since Anti-Venom is a creature that comes only from my worst nightmares, he has no weaknesses. Great.

So Anti-Venom and Spider-Man fight the Thunderbolts, as Norman fights Menace. 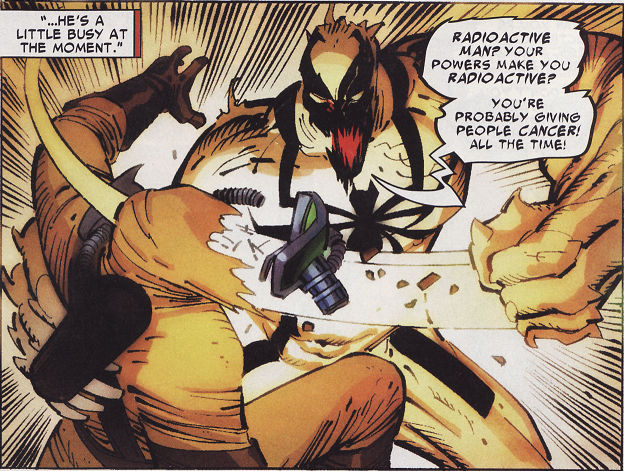 Spider-Man figures out that being around Anti-Venom makes his powers cut out for some reason. I guess the invasion of personal space did that? While that's happening, Menace tries to beat up Osborn, but he just says some command code and blows up her glider. She gets past this and beats up Norman a bit, then leaves for bigger and better things. As Spider-Man flees, Norman finds something and calls a retreat for the Thunderbolts. Anti-Venom follows.

Peter shows back up at the mostly destroyed homeless shelter, and we see... wait, who are these guys again? 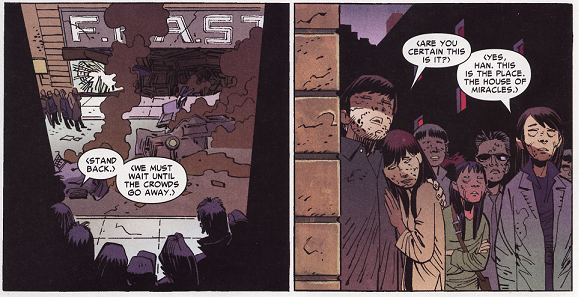 Oh wait, they're those Chinese people. I forgot about them because nothing but stupid has happened for the last two comics.

But we can't spend enough time for you to know what's going on there, we cut to Ben Urich, from Front Line, waiting for someone at a Diner. That someone turns out to be Harry Osborn, who has all the dirt on his dad. Apparently Osborn and Crowne have been working together to traffic slaves. I guess. I dunno, if Front Line is planning on publishing this to ruin Osborn's reputation, it's not gonna work. If people are dumb enough to love him now, what's a little slavery gonna do?

After that, Harry heads to the hospital to check on Bill Hollister, where Lily is all sad. (EVEN THOUGH SHE DID IT SHE'S MENACE)

Then we cut, again, to something completely different. More fake politics!

Okay, seriously? Another plot thread? So apparently Spider-tracers (Which, well, I didn't think people knew about) have been found on dead bodies, so naturally everyone thinks Spider-Man killed people. Crowne plans to use that to win the election.

With that, how much do we have going on right now? There's the Anti-Venom thing, Osborn trying to kill Spider-Man, the fake election, Menace attacking people for no reason, Martin Li and the homeless shelter, the Chinese people, whatever's going on with Harry and Norman, and now this! And they expected people to pick this up as a first issue!

Anyway, we see Anti-Venom has snuck in with Crowne's possie and he quickly changes to look like a guard. As Crowne's people leave, Norman reveals he got Peter's camera, which homes in on Spider-Man by tracking a chip in his chest. Now he can make guns that home in on Spider-Man. Bullseye counters that he could just throw stuff at him. There, the issue ends.

All I have to say is: Thank God there's only two parts left.