HE CAN REALLY MOVE

HE'S GOT AN ATTITUDE 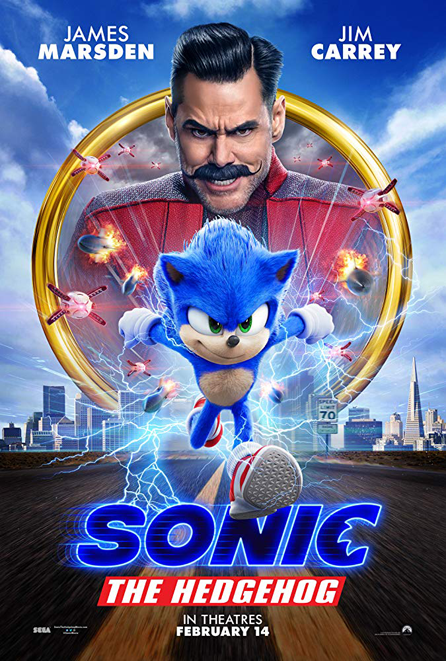 Man, this sure had a long leadup, am I right? Like Ghostbusters 2016, most of the buzz about the movie didn't really have all that much to do with the movie and occurred way before it premiered. But that's all "hype." It's all "marketing." So what's the deal with this thing? Did a more photogenic Sonic save it?

It really disappoints me to say that, but I can't claim I didn't see it coming. The studio did what lazy studios do when trying to reintroduce a franchise character to an audience they underestimate: They done plopped Sonic in the real world, with very little connecting to anything a Sonic fan would remember. Sure, there's rings, robots, he says, "Gotta go fast!" once, but they didn't bother trying to adapt anything.

Say what you will about the more current releases, but Sonic stories weren't always hamfisted trash. The first two games communicated themes of nature vs. technology very well just through level progression. Sonic 3 & Knuckles had a pretty good story, with Robotnik remaking the Death Egg on the fallen Angel Island, Knuckles thinking Sonic was part of it, and eventually Robotnik steals the Master Emerald and Sonic has to go Super to stop him. Now it's certainly no Final Fantasy 7, but with textless cutscenes they did a good job,

So what I'm saying is, this movie subtracted more than it added. Sonic's world, sometimes known as Mobius, gets a single scene early in the film before he's fled to Earth and the rest of our film takes place. But not before an opening so cliche, I think in the last 10 years there's been more parodies than straight uses: In the middle of the end-movie action scene, the screen pauses and Sonic narrates to the audience, "So, I bet you're wondering how we got here." I'm shocked the filmmakers had the restraint to not use a record scratch. He also has an Owl Mom for some reason, and echidnas are trying to capture him. But that don't get resolved. This is really just an origin story for Robotnik, and even then we're only catching the tail-end of it. He's already a pretty evil machinist in the beginning, it's just by the end he has a wacky mustache and hates Sonic.

Jim Carrey was pretty good, as I'm sure most people thought he would be. He doesn't quite bring the Grinch-level energy I've come to hope for, but it's certainly not bad. James Marsden was Mr. Bland the Human Actor, really not much to say there. Sonic. Sonic Sonic Sonic. I mean, he was more tolerable than he was in Lost World. Ben Schwartz did fine, I thought it would be really distracting, but by the end I felt the voice fit just fine. Sonic as a character is like a hyperactive kid, which I guess is fitting enough. He doesn't so much learn a lesson as get everything he wanted, but I wasn't really expected some hard-hitting emotional truth from this.

It's funny that nothing but the video games ever has any consistent idea of what rings are for. In the one cartoon called SatAM, they gave him some kinda power boost, they never show up at all in the whimsical cartoon or the OVA, and in this movie they make portals. It's not something really important, just a little thing I wanted to mention.

But yeah, there was nothing especially terrible about Sonic (LIKE THERE COULD HAVE BEEN) but nothing make it stand out. They took all the safe routes, which means it couldn't have attained any real highs or lows. I wonder what we could've gotten if they'd taken a chance on a full CGI movie in the Sonic universe. I guess we'll never know. Maybe if there's a sequel it could expand on that, but honestly I don't think we'll be going anywhere fantastical.
Posted by Walter Sojda at 11:50 AM No comments: