And Then You Keep Living

Life is just one of those things, y'know? When I'm not watching Barbie movies or finding the most depressing interpretation of kid's media, I like to watch things that are just regular sad, but bill themselves as comedies because, shit, man, nobody wants to sign up to get sad.

If you peruse a plethora of pessimistic media like I do, you're likely to see one of two outcomes for them: Either the protagonist dies and the audience is left with the poignancy of tragedy, or a happy ending comes out of the blue, contradicting themes that may have been prevalent throughout the work. Each of them can work, depending on what you're watching. If the show is something like Breaking Bad, the viewer gets catharsis in seeing the main character reap what he sows, or a nice resolution can keep the whole day from being a real bummer, dude. For me, those two endings can feel stale after a while. The Death Ending just closes off any further questions, with the sort of finality it's a little too easy to write, and the Happy Ending can seem just as cheap, sidestepping content I was probably really interested in.

That leaves the somewhat less oft-chosen path, commonly known as The Bittersweet Ending. That qualification is the most vague, essentially a mix of the other two endings in varying amounts. I tend to like these more, and I'd like to go into it by discussing two oddly similar shows; Welcome to the NHK and BoJack Horseman. Needless to say I'll be spoiling the entire plots, so watch them beforehand if you care about that sort of thing. 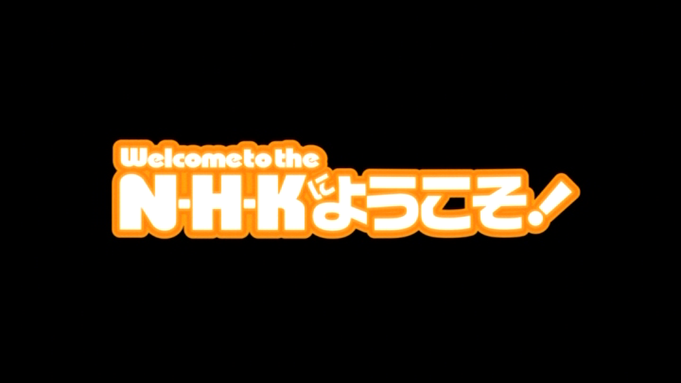 Welcome to the NHK is a 2002 anime about the life of Tatsuhiro Sato, a 22 year old man who dropped out of college and in the four years since has become what's known in Japan as a "hikikomori." He rarely, if ever, leaves his apartment, has no friends, and lives off money sent by his parents. This changes when he meets Misaki, an 18 year old girl who claims she has a program which can cure Sato of his hikikomori tendencies and bring him back into society. What follows is a series of mishaps as Sato tries to con his way out of being a shut-in, through things like creating a visual novel, selling MMO items for real life money, and joining a pyramid scheme. Most of the time he's pulled from the brink by friends he makes as the series goes on, like Yamazaki, his otaku neighbor, and Hitomi, his old classmate. It's often comedic, with Sato's foibles exaggerated to the point of parody, but can hit hard when you see how Sato truly feels about himself and isolation from the world. 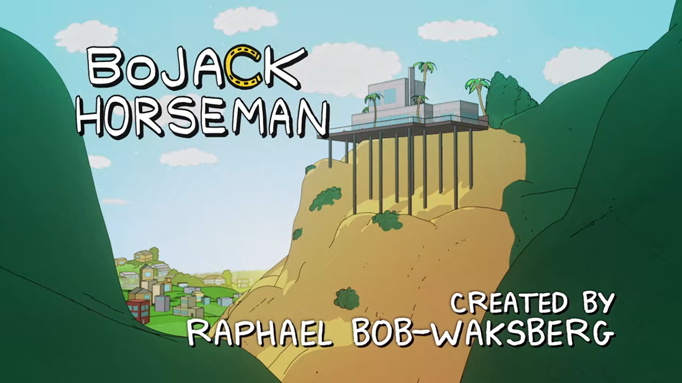 BoJack Horseman, also known as Sad Horse Show, is about an actor who was in a successful TV show back in the 90's, but is now all washed up, living off residuals in a sea of alcohol, drugs, and codependency. Things change when BoJack meets Diane, a ghostwriter hired by a publishing house to write the memoirs BoJack promised but did not do at all. Misadventures ensure, Diane publishes what turns out to be her account of spending time with BoJack, which, though brutally honest, gets him back in the limelight, leading to a shot to play his dream role. Successes and failures come in spades, with BoJack trying to become a better person, but always falling short. Oh and almost everyone is a talking animal-person.

The series of events in both of these shows is essentially a series of opportunities and failures by the main characters in their quest to try to get better without really putting in the effort needed to do so. BoJack, for most of the series, pursues professional success while neglecting the alcoholism and emotional issues that sabotage his accomplishments, and Sato finds himself unable to reenter society despite his efforts. Each show comes dangerously close to a bleak, nihilistic worldview. It fringes upon the idea that only failure is possible. 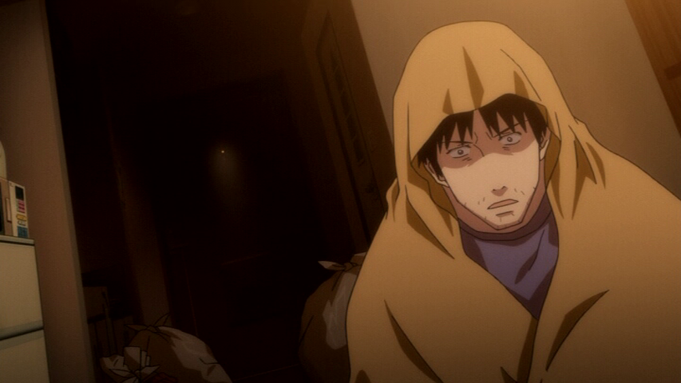 This would all be too much if we didn't widen our focus once in a while, to the secondary characters. In each of these shows, there's a cast of people who have different problems, that similarly lead to comedy or drama. These characters develop alongside our leads, allowing them to affect one another in different ways. Yamazaki goes from a lonely otaku to a somewhat abrasive friend that even starts dating a girl. Misaki turns out to be an orphan with an abusive childhood, cared for by her aunt and uncle, and struggles with feelings of worthlessness. She takes on Sato's case to prove to herself that someone could be so pathetic that even her life could have value.

Princess Carolyn, BoJack's agent, founds her own agency and becomes a mother. Todd grows out of being an aimless slacker into running a daycare and paying for his own apartment. BoJack and Diane's friendship is the cornerstone of the show, their differences heightened by their sometimes disturbing similarities.

See, as each series goes on, the potential for a happy ending gets further out of reach. In NHK, Yamazaki moves away, removing Sato's one friend, and he rebuffs Misaki's feelings out of shame and anxiety, leaving him worse off than when the series began. In BoJack, the sheer magnitude of his mistakes piles up, and it's hard to see a path forward. In the final episodes, both shows have the main characters attempt suicide. Sato flings himself off a cliff (that Misaki's mother once used to end her life,) in a misguided attempt to absolve Misaki from her guilt, and BoJack becomes dangerously drunk and passes out face-down in a swimming pool after confronting just how far he's fallen. I've seen arguments that these shows could have ended this way, with these people dying, wrapping everything in a nice depressing bow. I heartily contend that this would have been a wrong move.

With the focus these shows put on their side characters, it shows that a person's actions affect more than just themselves. Each step they take is felt by the people around them, for good or for ill. To have them die would shunt that desolation onto everyone else in their lives. Even BoJack, who by the end of season 6 we know let Sarah Lynn die, would have affected those around him with his death.

It would just be too tidy to end a story that way, as far as I see it. You kill a character who seems to be beyond redemption and say, "That's over," seems like a cop out. Because for most of us, when life is at its worst, we don't just die. And even if we do, life keeps going for everyone else. Death is not really the end for us, because there will always be people who have to deal with the things you've done or haven't done. In real life, there's always more show.

Luckily for me, then, that neither of these characters die in these attempts. Sato is saved by some netting set up to stop suicide attempts, and climbs back up into the arms of Misaki. She tearfully reprimands him for his jump, and after a flash forward, we see that Misaki is trying to get into college, with Sato teaching her on nights after coming back from the construction job he hates. They have a new contract, called the NHK1, where neither is allowed to kill themselves or else the other would do the same. They each see themselves as worthless, but couldn't stand the idea of the other dying. As Sato says, "In the end, even after all we went through, none of our problems were solved. And even though things look better now, it wouldn't surprise me if we went back to saying things like, 'I'm useless,' or 'I can't do it.' Still, for now at least, I'm hanging in there. I don't know how long it will last, but dammit, I'll give it the best I've got."

In BoJack Horseman, he is saved at the last minute from the family whose house he broke into, but since what he did was illegal, he is sentenced to jailtime. He is let out for one day to attend Princess Carolyn's wedding, where he briefly meets with each of his friends. The last he sees is Diane, where they have a long talk on the roof. Diane tells hm she got a phone call from him before his attempted suicide, making it very clear what he was about to do. She had built a life far from BoJack and Hollywoo, but this phone call threw that all into disarray. She almost gave up on her new life, but went through with it and is finally happy. She says, "I think there are people that help you become the person you end up being, and you can be grateful for them even if they were never meant to be in your life forever." It's likely BoJack and Diane will never see each other again. 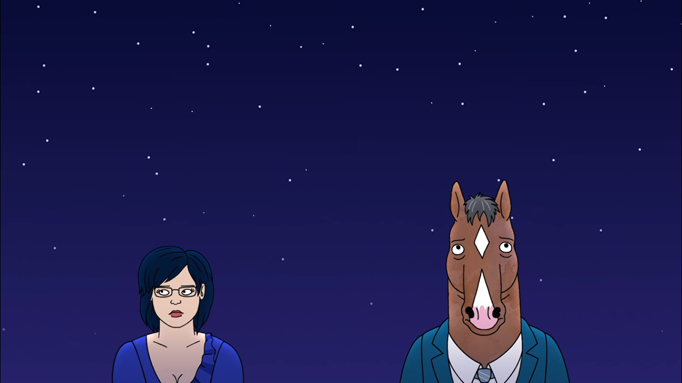 The end of a life is never as simple as the end of a television program. There are always people left behind. You can't wrap a nice little bow on chapters of your life, either. Whether or not you solve your problems, the scars remain, and regret will rear its ugly head. But you keep going. Sato isn't cured. BoJack is still depressed. The difference is we can see a path forward for them now. It's probably going to be shitty for quite a while, but it will continue and there's always a chance for them to make it better. Sometimes, life's a bitch, and then you keep living.