Books from the Bin: Mindscan

If you've read anything I've written, you probably know that I like to think about the confines of identity, how it changes, what constitutes it, and all that. So maybe you can understand my mindset when I saw a certain book in the fabled bin, and why I had to read the whole goddamn thing. So here we are.


Books From the Bin: Mindscan by Robert J. Sawyer 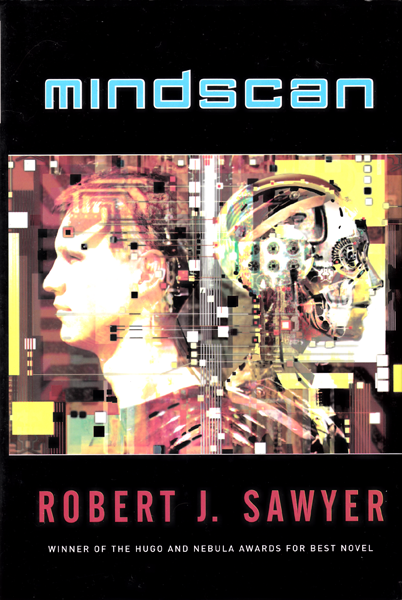 Now that we're looking at the same cover, I hope you can see what I saw. To my mind this was probably a Dickian or Asimovian sci-fi book, with the questions of what constitutes artificial life, what makes a person a person, and what happens when there are two of you?

I don't think I would be writing this if it was that. Lemme lay out the plot for you. In the far off future year of 2045, the corporation Immortex has created a way to copy the mind of a human being into a robot duplicate. It's still very early work, so only the wealthiest can afford the procedure. One of those wealthy is our main character, Jake, who has a terminal brain problem and pays a fuckton of money to get a robot duplicate, while his original is shipped off to the moon to die. Turns out the original guy's brain condition has a cure, which he promptly gets on the moon, but they refuse to bring him back to Earth, as the robot is legally him now. Now, what you would expect is an exploration of the psychological impact of being replaced by a robot version of you, that, at least from the moment of transfer, was you.

You would think that, but instead most of the book is about how great it is to be a robot, then a court case which somehow ties the legality of a robot duplicate to abortion(???) and the original Jake actually gets psychosis from the brain surgery so we don't actually have to grappel with that viewpoint and yes of course the robot is the original shut up.

In Asimov, the ideas are told straightforwardly, but the concepts are big enough that it's interesting to see them through. A good portion of his original robot stories are just two scientists arguing, which gives you the context and information you need to know to start guessing what's going on yourself, until the ending where it's revealed. With Philip K. Dick, the ideas are big and convoluted and scary. Frequently he'll confuse your sense of what is actually real, a lot of his stories star or feature a character with schizophrenia or hallucinations. It's anyone's guess where any of these stories are going to lead, but they almost always provide good questions about the nature of reality.

Sawyer, on the other hand, has simple execution and boring ideas. The concept of this book is that robot bodies are the future, are better than organic bodies, and should be recognized as the original whenever possible. One might think there would be a treacherous philosophical path to lead here, but what appears instead is a broad scientific idea of what creates consciousness (not what constitutes consciousness) and an even broader legalistic look at personhood.

The court case that makes up the crux of this novel consists of Jake's new robot girlfriend, an old, famous, witty, filthy rich author of young adult novels who gets a robot body so she can live forever and never lose copyright on her books, versus her son who posits that his mother died on the moon and the robot cannot legally be his mommy. The robot lady is both an author mouthpiece and an erstatz J. K. Rowling. She's a beloved author worth billions who is never wrong. I call her J. K. Robot.

It is this court case that's meant to contain the real meat of this novel. It's not inheretly a bad idea. There are plenty of pieces of fiction that use a court structure to discuss speculative concepts of this nature, and it's not all that different than Azimov's scientist arguments. The trouble with Mindscan is that it tries too hard to make the court behave like an actual courtroom. It's about laws and precedent, and since it takes place in a speculative future of the USA, these aren't even laws we're familiar with. It never really tackles the fundamental issues at play in a way that makes you think.

There's an episode of Star Trek: The Next Generation called "Measure of a Man." It centers on a court case deciding whether an android character, Data, has the rights of a sentient being. The sides argue back and forth about what makes up a person, eventually coming to the question of what comprises sentience, and how to determine if something embodies it. It's deep, it's allegorical, it leads to the realm of philosophy and can change your perspective.

In Mindscan, however, it comes down to two sides. The Robot side calls a neuroscientist/robot brain man, who goes into technical detail to explain where consciousness resides on the brain. The opposing side calls a philosopher, who turns out to be a Christian, who essentially asserts that robots don't have souls. There's nothing to sink your teeth into here. Sure, I may now be aware that the prevailing consensus of neuroscientists in the year 2006 was that consciousness was created in the nanotubules of the brain. But where does that get me? There's no food for thought here, you're just meant to accept that the robots are people, and those who disagree are unscientific.

What about the human guy who wants his life back? Surely that must have some meat we can sink our teeth into! But no, that, too, ends up with a shallow conclusion. Beyond having much less page-space dedicated to it, the moral conundrums are sidestepped by two very important points. 1. The guy signed a contract, dude. And 2. He got psychosis from the brain surgery so he's too unstable and violent to bring up a cogent argument, and it's fine when he's killed by J.K. Robot. Reading the sections with him makes you feel like maybe you have psychosis, because obviously anyone would want their life back, especially if Robot You has alienated your friends and family by being a robot, but nobody else in the Moon Hotel cares! They're all "Well you signed a contract sir" as if that's the most sacred law devised by man. It's written as if it's unreasonable to want to have your life back after you give it to your robot copy! And it's extra sad for me, because this book missed a perfect opportunity for Clone Angst. I love Clone Angst! And I can't find it anywhere but Spider-Man!

Think about it! It's a perfect analogue to Ben Reilly! What do you do when you lose your entire life to a copy of yourself? If everyone around them sees them as the real you, what do you have left? Think of the tragedy, the isolation, the unmooring of your very identity and the rebuilding that must be done in order to continue. But nope! He signed his personhood away and got psychosis and died anyway so we don't have to think about something actually interesting.

And it's certainly not limited to these two examples, the book is filled with little opportunities to explore this topic, but shuns them aside or ignores them entirely, making the act of proposing them nothing but frustrating. To wit: Robot Jake and J.K. Robot are watching the news as Canada makes multiple marriages legal. Jake, being a younger guy, is glad for the social progress, but J.K. Robot, being old as shit, is apprehensive. But she sees the disparity in their opinions on this, and brings up the difficulties immortal robot bodies bring to social change, when inevitably you'll have the same rich powerful people and their outdated ways of thinking forever. So what happens? Is this discussed again? Of course not! At the end they go to Mars where it's a bohemian paradise and I guess J.K. Robot just changed her mind about this sort of thing.

Oh, what about the idea that once you've made a digital copy of a brain, you could replicate it infinitely? There's some ethical quandaries there, right? Worry not, that very thing happens to our main character! Through some quantum bullshit he can psychically communicate with his other robot duplicates, and at the end an Immortex scientist reveals they've been performing experiments on his brain using these duplicates. Oh shit! There could be a whole book just about that! Well Jake is just sort of upset but takes no definitive action on it. He has some stern words for the scientist who does not give a single shit.

Something else keeps popping up and I cannot for the life of me figure out why. Characters keep bringing up old pop culture, and it's completely mystifying. It's comparable to Ready Player One, but at least that wove it into the plot! They mention Cats, Harry Potter, Finding Nemo, Lord of the Rings, Captain Scarlet and the Mysterons, Steven King, Magnum P.I., Superman, The Six Million Dollar Man, and probably even more. I don't think I've ever read a sci-fi book that mentioned real world media so often and so jarringly. It's ironic, I think, to directly mention so many other properties, when author mouthpiece J.K. Robot has a little spiel against the very notion of public domain. Maybe it's just the way I am, but once she suggested that copyright should be held by estates forevermore and it should be illegal to use characters from those media unless you own that copyright, I was sure she was going to be the villain. How naive I was.

Over and over again this book only disappoints. Halfway through the book, my mind was awash with possibilities! None of them bore fruit. I had it wrong, this book wasn't supposed to be a meditation on the self in a world where one's brain is replicable. It's not meant to go through the ethical or philosophical implications of this process. I shocked myself that in all actuality, Warpath had a more thorough and cohesive concept of the whole brain copy conceit. This book is just there to provide the same thing transhumanists have been saying since their inception: Being a robot is fucking awesome and anyone who doesn't think so should go to jail or die.

And I didn't like it.
Posted by Walter Sojda at 3:32 PM No comments: