Concept Corner: Come On And Slam

You know what? Let's just have some goddamn fun. These albums don't always have to be serious shit where you analyze all the lines and leitmotifs to see the deeper subtext. Sometimes you just want to listen to a punk/folk/bluegrass album about Space Jam.


Concept Corner: Sledding With Tigers - Come On And Slam 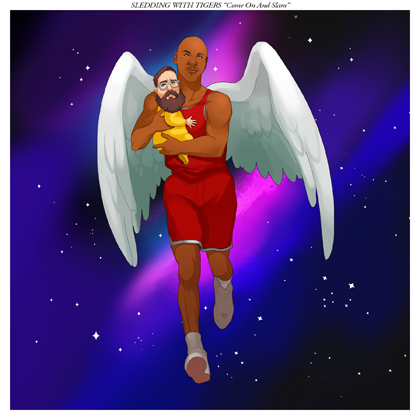 Come On And Slam is a 2015 album by Sledding With Tigers that came out of nowhere. How did somebody know to make this? Did they go inside my brain? I didn't even know the desire for this was in there. But here it is. It's all downhill from here.

Michael Jordan, basketball superstar, retires. He wants a new sport, with a smaller ball and a stick. Which, oddly enough, actually happened in real life. [1. Retirement] Then we jump to the alien planet whose name I can't remember. It's not important. Mr. Swackhammer, a fat alien who owns a failing theme park, is sad about those things. Maybe if he kidnapped the Looney Tunes, then things could be better... [2. Aliens Exist 2 (Swackhammer's Lament)] Back on Earth, beloved actor Bill Murray wants to be a star in the NBA. Michael Jordan gives him some gentle advice. [3. Take It From Me, Michael Jordan] Now the aliens are on Earth, and are about to abduct the Looney Tunes for their theme park. But the aliens need to give them a chance to defend themselves, they have to win a competition! The Looney Tunes pick basketball, because all the aliens are short, and those kind of people are not usually very skilled at basketball. [4. Short People by Newman From Seinfeld] In a twist of fate nobody saw coming, the aliens steal the skills and height, somehow, from pro basketball players. One such man is Charles Barkley, who, shit, man, is having a real tough time of it now. [5. The Ballad of Charles Barkley] So then we skip ahead a while past Michael Jordan meeting the Tunes and them learning basketball with a classic 80's song montage. [6. Mon-tage] Now we're at the end! Man, that montage skipped a lot. Things start out bad, but Bill Murray finally gets his chance! I mean, you watched the movie, you know how this goes. Unless you didn't, in which case, how did you get here? The ultimate point being that Michael Jordan makes a one-of-a-kind halfway-across-the-court stretchy-arm shot, and they win! That's the end. [7. The Big Game (Movements 1 & 2)]

Now, you probably notice they cut a lot out, but that was to focus on the real emotional core of the film, which was obviously Bill Murray and Charles Barkley. Bill starts out dismissed, as a short, not terribly athletic actor, who probably has no business playing basketball, to the last hope of the Looney Tunes so they don't all become Space Slaves. In the film proper, Charles Barkley and the rest of the NBA stars who have their talents stolen by the aliens are little more than the butt of a gag. But "The Ballad of Charles Barkley" delves deep into the emotional turmoil one would feel if their very essence was siphoned from them. It's so raw and poignant it nearly drove me to tears. Even Swackhammer, leader of the evil aliens trying to capture the Looney Tunes, is just a sad overweight alien with an insolvent theme park, who lives each day in fear.

You may have thought Space Jam was complete on its own, but this album adds so much more. In fact, forget the movie, if you want the real story, just listen to this album.

You would think an album of this caliber, being that it's a short, oddly genred joke, wouldn't actually be good to listen to just because. But it is. If I'm not already marked as a Degenerate Hipster, this'll probably do it. Though it may not be as ambitious a mix of genres as say, Ayreon, Sledding With Tigers resides in a certain niche of indie music that's difficult to classify. Punkish-folk or Folkish-punk gets the idea across. They even have a song where the opening lines are "I'm not punk enough for punk and I'm not folk enough for folks." It's of course an odd choice to make for a Space Jam album, but a Space Jam album in the first place was an oddball idea.

The album's pretty short, at around a 15 minute runtime, so picking favorites is both less and more difficult. "The Ballad of Charles Barkley" stands out for me, since divorced of the Space Jam connection, it sounds more or less like one of the band's normal tracks. I won't lie, I actually had an authentic emotional moment listening to this song. From an album about Space Jam.

"Take It From Me, Michael Jordan" is surprisingly catchy. With banjo played by Brandon Boggs, it's a peppy little delve into Bill Murray's heretofore unfulfilled dream. Poor guy.


Dan Faughnder provides vocals and acoustic guitar for the album, and though his voice doesn't carry the same majestic weight of my favorite metal vocalists, it's perfect for the project. He even has a little speaking segment in the middle of "The Big Game (Movements 1 & 2)" giving the whole thing an almost Arlo Guthrie vibe. That's without mentioning the mini-cover of the Space Jam theme in the chorus, making this a sort of unofficial Slam Jam.

Come On And Slam might be a silly joke album, but it's one I unironically enjoy. I mean, shit, they gave an emotional arc to Bill Murray from a kid's movie from the 90's. It's nothing to take too seriously. You can purchase this album yourself on the band's Bandcamp page and you can name your price! Here's hoping they release a longer version covering more of the whole movie, like Daffy's superiority complex, or maybe another film, like The Pagemaster. Shit, now that I came up with that idea, it's all I want.

Posted by Walter Sojda at 3:00 PM No comments: