Starting last year, Marvel began to release graphic novels under its Marvel OGN (Original Graphic Novel) line, with standalone stories for some of their bigger franchises. It started with a book called Avengers: Endless Wartime which got pretty good reviews. I didn't read that one. What I did read, you can probably guess, was the Spider-Man one. 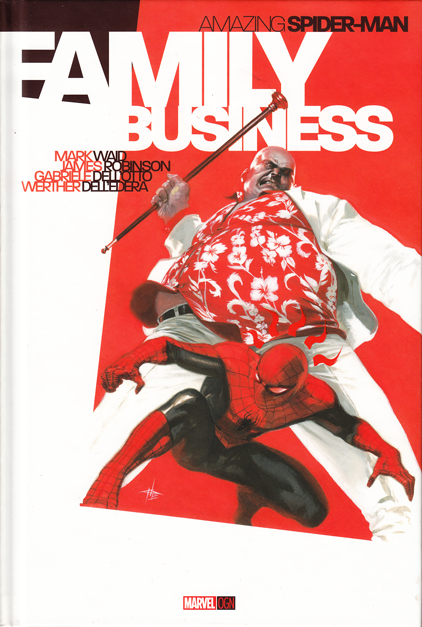 The story is a little different than what you'd expect for a Spider-Man comic, but I like that. Peter is targeted by some spy-looking types, and is rescued by a CIA agent that claims to be his long lost sister, Teresa. It's got sort of a spy-thriller aspect to it, dealing with Peter's parents and one of their missions before that plane crash.

It's written by Mark Waid, of current Daredevil fame, but who used to write stuff for DC like the beloved Kingdom Come and much of Wally West The Flash, along with James Robinson, known currently for starting DC's Earth 2. The writing is better than I expected, honestly.

Most of the book is out of what I would call Spider-Man's "comfort zone," meaning it's not so much about New York, or some Avengers-level disaster. That's good and bad, good because it's not a rehash of some story we've read again and again, but bad because Peter doesn't have much agency in it, so we're all just along for the ride like he is.

The novel's got a heavy presence of Peter's internal monologue, which is the best way one should write a Spider-Man story. Luckily, the dialogue keeps up its end, since most of it is between Peter and Teresa. Speaking of Teresa, I like her character, but a lot of it is tied up in that she's a random spy and also Peter's long lost sister. Or is she? Or isn't she?

The art is top-notch. Fully painted, by artist Gabrielle Dell'Otto, it's got a lot of detail and ambience in each scene. There are more than a few pages I'd love to have prints of. 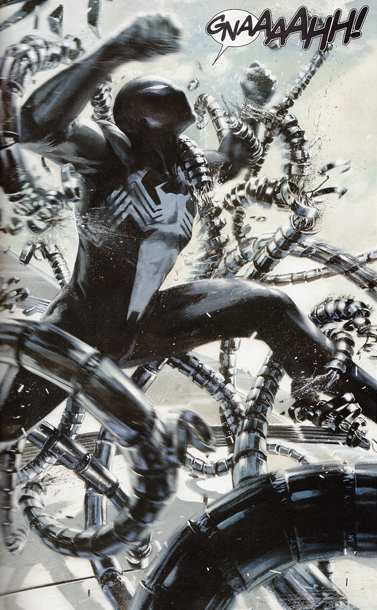 Overall, it's a damn fine book. Someone without a lot of Spider-Man knowledge could pick it up and read it, but it's pretty rewarding to longstanding fans as well. The hardcover is a classy touch. At $24.99 it's has a bit less content than I thought I was getting, but since it gets a free digital download like most Marvel comics these days, the price is easier to take.

So yeah, if you like Spider-Man, I can easily recommend this, Hell, even if you don't like Spider-Man all that much, this is a nice departure from his usual scenes that you might like it as well. That was Family Business, and this is the W Defender!
Posted by Walter Sojda at 9:36 PM No comments: