The Amazing Spider-Man No Spoiler Review

As you probably all know, I saw The Amazing Spider-Man at the midnight showing, and I was sufficiently impressed! There was a lot I liked, a little I didn't, so let's get right into it. 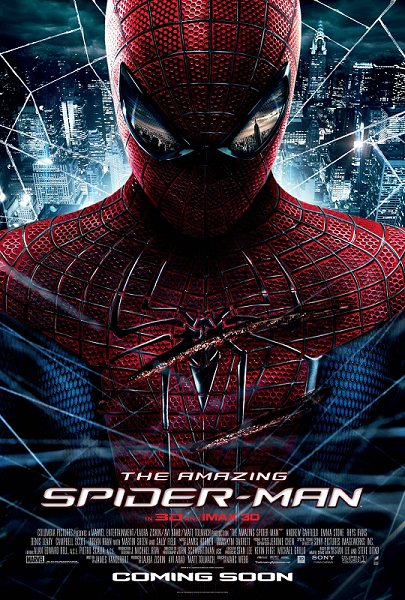 Andrew Garfield as Peter was well established, though he was less of a science nerd and more of an engineer. It's a bit of a departure from the usual Peter Parker who's all science all the time, he seems less smart and more of just a normal guy. I was a little disappointed at that, especially since the trailers seemed to show that Peter actually used some smarts to do stuff.  Martin Sheen was an amazing Uncle Ben. He had a real, tangible presence on screen, and he actually seemed like the kind of guy who would raise Peter Parker. He didn't just go around giving speeches, he behaved like a real parent would. Rhys Ifans as Curt Conners/The Lizard... Well, we'll get back to him.

Spider-Man himself was handled very well, I think. The webs were mechanical, as I pointed out in one of the trailer previews, which is what I prefer. One of the things I loved most about it, that other people have pointed out, is that he really moves like a spider. There's one scene where he crawls around a bad guy and covers him in a web cocoon. That's really cool. It's something we haven't really seen Spider-Man do, which is why I like this movie so much. It showcases so much of what we haven't seen Spider-Man do before. He quips only slightly more than in the Raimi films, but honestly at this point I'll take what I can get.

Storywise, I was pretty happy with it. Romance plays a fairly large role, but really, it's always been a pretty big part of Spider-Man. Emma Stone as Gwen Stacy deviated from comic-Gwen in that she actually did stuff, instead of just being baggage Peter had to deal with. The love story was handled well, I'd say better than the original movie's romance plot.

As for the rest, you probably saw from trailers that Spider-Man clashes with the police, which I enjoyed. The main problem is with the main villain, The Lizard. I mean, it's Mad Scientist Lizard. I don't think there's a way you can do that where it's not a bit silly. You could tell Ifans was doing his best to keep it serious, but it's a humanoid scientist lizard. He had to work with what he had.

Some shots were familiar, like the usual swinging scenes, and the New York overhead shots.  The first-person effect wasn't used as much as I thought it would be, and it might be a good thing, since if it were overused, I think it just would've caused motion-sickness.

Overall, the movie just shows a different type of origin for our wall-crawling friend. He's not exactly the same Peter Parker we knew, and things don't go the same way. It had a darker tone with a lot of nailbiters, but some parts managed to have comedy, and of course you have the New Yorkers Unite scene that gives you the warm fuzzy feelings.

So the Amazing Spider-Man gets the W Defender seal of approval! I give it about an 8.5/10. If you want spoilers and the like, I'm planning on watching it again soon and writing a more in-depth review. I like it now, but if you had asked me what I thought of Spider-Man 3 after only seeing it at midnight, I would've said I liked that too, so my judgement at these showings may be skewed. So, grain of salt, at least until I've watched it again.
Posted by Walter Sojda at 11:27 AM