Spider-Man: Into the Spider-Verse is one of the best movies I have ever seen. It's like it was made just for me. I'm finding it difficult to name something I didn't completely enjoy from this film. I'm serious, it blows every other Spider-Man film out of the water. 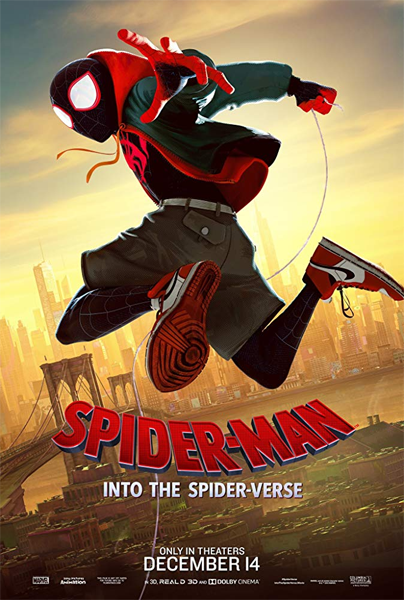 The film stars Miles Morales, pretty much as you know him, who gets bitten by a radioactive spider (or at least, it might be radioactive) and stumbles onto a multiverse portal project created by the Kingpin. What he also sees is Spider-Man get killed while trying to shut it down. Out of nowhere he meets what seems to be Spider-Man back from the dead, but is in fact a Peter Parker from one of these parallel universes, who just so happens to have a much worse time of it than the Spider-Man Miles is familiar with. From there we meet Spider-Woman (Spider-Gwen), Spider-Man Noir, Spider-Ham, and Peni Parker with her robot SP//dr. They go out to shut down Kingpin's experiment while Miles learns how to be the Spider-Man he has to be.

Visually, it's a feast for the eyes. It borrows comic book aesthetics and certain tropes, like narration boxes for internal monologues and onomatopoeia hanging in midair. It's one of the most inventive and interesting looking animated films I've seen in the last decade. It doesn't just try to copy panel structures without bothering to figure out what makes them work, (like some other directors coughSnydercough) it takes just enough to feel like reading your favorite comic but transforms it into something entirely new. The various Spider-People all look unique and fit their respective universes without being out of place with their fellows. Spider-Ham is Warner Bros. cartoony, Noir is eternally in black and white, but when they stand together it just works. The finale is an amazing spectacle, as they tend to do in these superhero films, but not once did I have trouble distinguishing the action or get bored from just too much stuff.

The writing is phenomenal. None of the Spider-Men is a one-for-one recreation of a Spider-Man you may know and love (save for maybe Spider-Gwen) but it doesn't matter. Phil Lord and Christopher Miller just get it. Sometimes it seemed like other filmmakers didn't get Spider-Man the same way I do, but these guys? They do. I can't stress this enough, when they look at Spider-Man they understand everything I think of and what makes the character so important to me. The main Peter Parker of the film, played by Jake Johnson, is washed up, depressed, divorced, fat, not financially solvent, and yet he's still a perfect Spider-Man. All the retcons in the world can't net you the true feeling of an authentic human Spider-Man. It's the polar opposite of Dan Slott's CEO Spider-Man, and gets right everything that portrayal got wrong. He doesn't have to be a super-smart successful owner of a Fortune 500 company, he just needs one trait. When Spider-Man is knocked down, he always gets back up.

Our main character, however, is Miles Morales, and I am so glad they went with him. For one, it's his first appearance in a film, so we don't have to see yet another Peter Parker origin story. He's a perfect newcomer, a breath of fresh air, so when other Peter Parkers show up, it's someone who knows about Spider-Man the same way the audience does. Finally we get an origin movie that is more than just an origin story. They don't just set Miles up so he can possibly do more interesting things later, this story is interesting and thrilling and new and also just so happens to contain an origin story as well. It doesn't contain some nobody uninteresting villain just because you have to have one of those in a superhero movie. It's everything I found wanting in every Marvel movie made so far. I can't believe the same company that made the goddamn Emoji Movie made this.

The film is peppered with little easter eggs and references to Spider-Man lore, so much that I'd have to watch the movie a few more times to get even half of them. (Don't worry, I absolutely will.) And what's so refreshing is that you don't need to know all of these trivial facts to enjoy the film, and they aren't the sole reason it was made. (Solo anyone?) It's genuine care and, dare I say it, love for the character, for his legacy and for all the cool ideas associated with him.

I was afraid, going in, that this would copy Dan Slott's Spider-Verse series in the comics, with some weird group of Spider-Man eating vampires and then they all just kinda show up to fight them and it doesn't make a lot of sense. Thankfully, they just took the base idea and the title. It's more akin to the finale of the Spider-Man Animated Series from the 90's where he meets a bunch of alternate selves. Just without Madame Web, THANK GOD. Comic-wise, it's a lot like Bendis' Spider-Men series, where Miles meets a more experienced adult Spider-Man and you get some real growth between the two. Truth be told it doesn't directly adapt any comic, which I'm thankful for, since a lot of times all you can do it draw comparisons between the two, which waters down the adapted work.

If I had to nitpick SOMETHING (and let's face it, I do.) it's really just one thing. Spider-Man Noir and Peni Parker don't get a lot of development in the movie, with Noir there mostly for jokes about Film Noir and whatnot. I get why they did that, giving each of these characters a full arc would've ruined the pacing, especially since we get so much character from our other Spider-People. In a way, it's actually a positive. It left me wanting more, I would love to see the Spider-Crew travel to the Noir of SP//dr Universes in a sequel.

Obviously I'm incredibly biased, seeing as half the point of this website is to talk about Spider-Man even when (ESPECIALLY when) nobody is even reading, but this movie is a 10/10. 100%. A slam dunk. Criterion collection. A masterpiece. I wish I could marry this movie. If I only had one piece of media to watch for the rest of my life, it would be this film. If you like Spider-Man AT ALL, I highly suggest you watch this movie. Even if you don't like Spider-Man. If life is a hopeless barren waste where all you can see is disappointment and regret, I recommend this film. And I hope to god they make a sequel, and put Lord and Miller in charge again. I would follow those men to the ends of the Earth.

Wait it didn't have the Spider-Signal in it, certified rotten, F grade, it's trash. 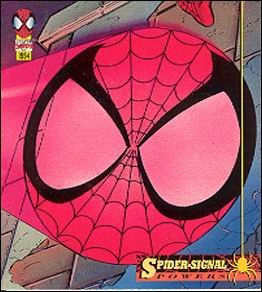