Oh hey, did somebody want more irrelevant Spider-Man comics from the 90's nobody cares about?

Well. Here it is anyway. 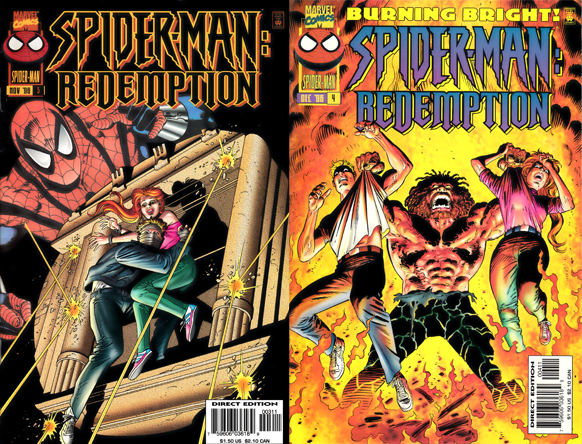 As we ended last issue, Ben Reilly's girlfriend Janine was being carted away by the police for the murder of her father, whom she killed in self defense. Maybe by now things have gotten better? 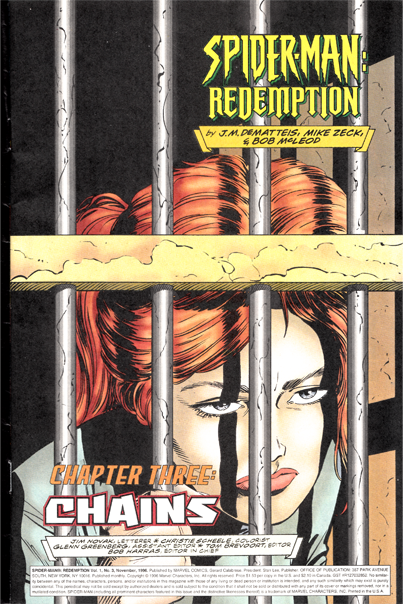 Looks like somebody's got a case of the mondays! Janine is being held in jail, awaiting trial. As she's being transported in a prison van, a mysterious man breaks into the van and frees her, under pretense of taking vigilante justice. 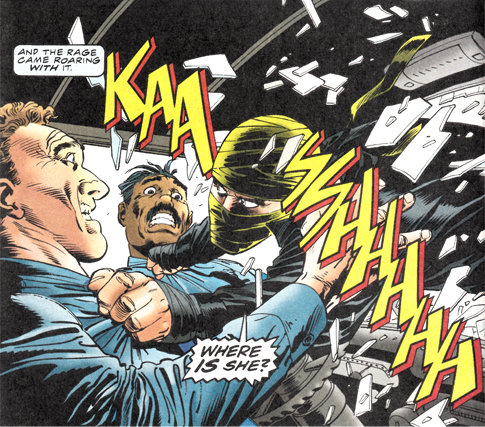 YES! There's the window breakage I need! Doors are for losers!

Anyway turns out it was Ben Reilly in disguise, come to bust her out of the joint so they can go on the run together. Kaine watches from afar, until he falls off a roof.

He's still mad that Ben could ever be happy while Kaine is still a mutated garbage pile of a man. I can relate. His needlessly convoluted plan, however, remains in motion.

We meet back with Ben and Janine, planning for their flight from justice. But Ben won't go on until Janine explains why she left all those years ago. Turns out, it was under threat from Kaine, who, as he does, broke into their house at night and kidnapped Janine. Then he takes her on top of the Golden Gate Bridge, because I guess they were in San Francisco. Oh hey, maybe they'll see Venom! So tell me, why did Kaine take her on this particular field trip? 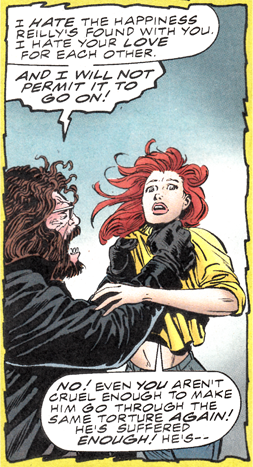 C'mon Kaine! You don't gotta take nobody on top of a bridge for that! Just quietly resent and wish misfortune upon them until you collapse into a pile of your own spite and cynicism. Like the rest of us!

So yeah, Kaine makes Janine write a fake suicide note and somehow whips up a fake body for the authorities to fish out. Ben's understanding enough now that they've been reunited, but it doesn't last long! 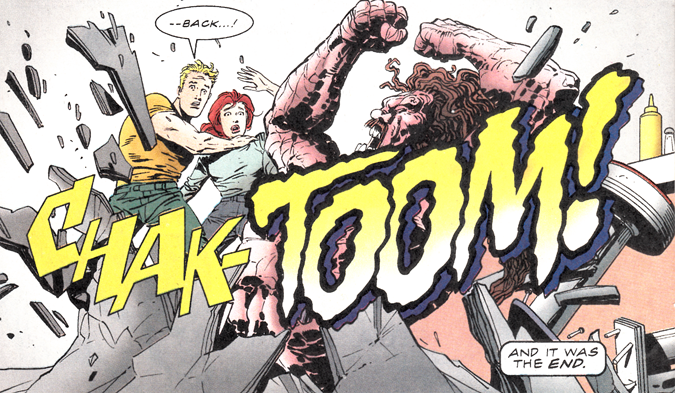 Doors, Kaine! They're on every building! You just turn a knob! At least with a window you can see where you're going! No wonder you're not accepted by society. Well that and the fact that you put a bomb in the diner. 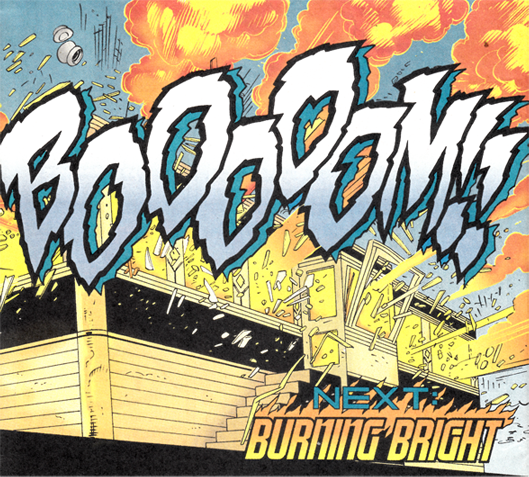 The last issue opens with Kaine saving the other patrons of the diner. See? He's not all bad, though I guess this is the part where he lets Ben and/or Janine perish in the flames. That's what this was all leading up to? He really could've killed either of them at any other point. Blowing up a diner doesn't really connect with the rest of what he's done thusfar, but whatever, at least it led up to something. 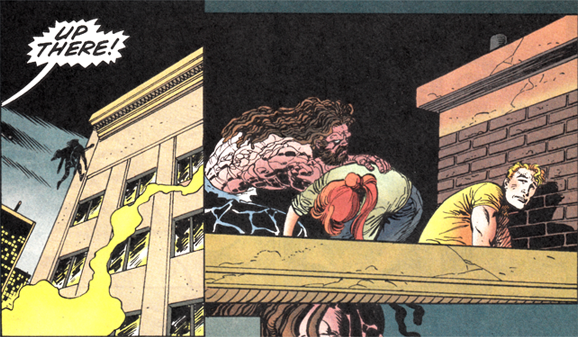 So it looks like Kaine's thrown his whole giant, three issues worth of plan out the window. Man, that must be quite a disappointment. How's he taking it? 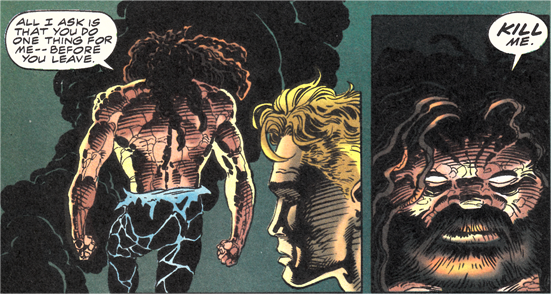 These millennials and their suicide jokes, right?

Ben refuses, of course, and urges Kaine to turn himself into the authorities. Instead, they fall back on old habits and start beating the crap out of each other. The police arrive, I'm assuming called because of the diner explosion, and try to break them up. Kaine grabs an officer and flees to a billboard, where cops are ready to shoot to kill. At the last minute Ben shoves Kaine out of the line of fire. Well, now that they both have a chance to calm down, I'm sure Kaine will see where he went wrong.

We've all been there, buddy.

But it turns out Ben's words have had an effect, as Kaine surrenders to the police. Unfortunately for Ben, Janine's come to the same decision, wanting to finally put her past behind her. You know, that's a nice little bow on top of this and all, but really we could've gotten here much earlier if Ben hadn't broken her free. As long as he's not planning anything this time. 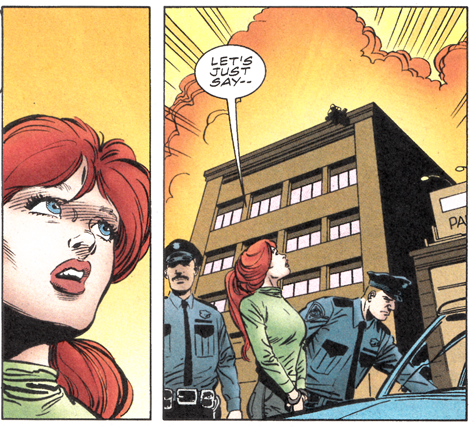 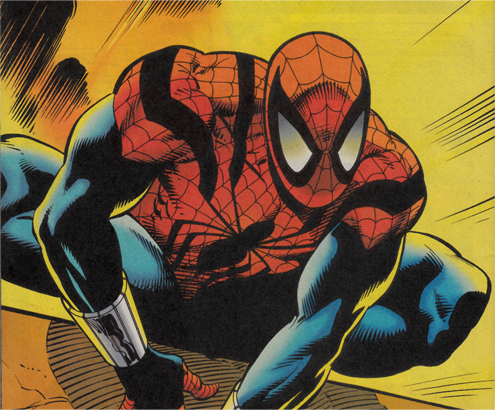 WAIT BEN NO YOU'LL START IT ALL OVER AGAIN
Posted by Walter Sojda at 12:53 PM