Now then, my older brother has a lot of comics, and as a gift, gave me some of his Venom ones. I was thrilled, seeing as how Venom kicks ass. Little was I to know that one of the series he gave me would be the worst story to ever grace the pages of comics. Yes, the day has finally come. Today, I write:

Now then, let me start by saying I wanted good things for this comic. As I could tell from the covers, there was going to be Venom vs. Juggernaut, which I thought would be awesome. Unfortunately, this didn't exactly live up to expectations. 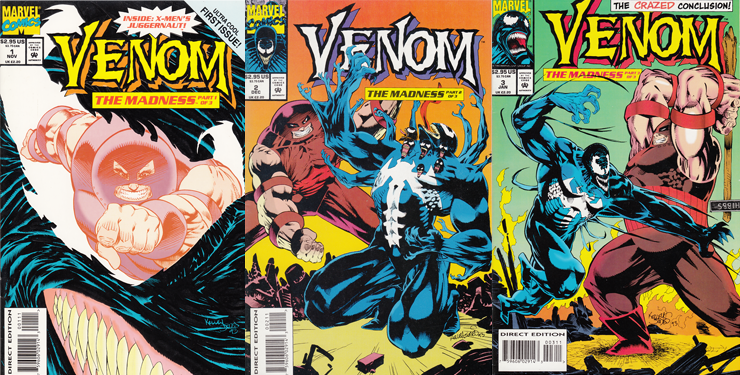 It starts with Venom dreaming, with a voice talking about how his previously perfect symbiosis was not actually perfect at all. This crazy guy ranting on the streets about evil pollution is attacked, Venom wakes up, saves the guy, and meets Beck. See, at this point, Venom lives underground with a group that are essentially hobos, and eeeevil corporations are polluting underground, so Beck, some lady who apparently has nothing better to do, is suing the evil companies. The boss of one of these companies, Scarmore, is always coated in shadow, and sounds more like a bad Captain Planet villain. 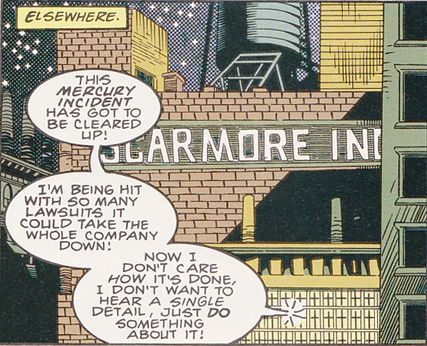 Somehow, I guess, he made an evil sentient mercury in the course of making whatever it is he makes, and that's what he's being sued for. Anyway, his lackey hires Juggernaut to stop the lawsuit. Meanwhile, Brock and Beck are having a tender moment, but Beck is a little disturbed when the symbiote gets a little too friendly, so that cuts it short. That, and the crazy guy from before tells them someone who's helping with the lawsuit pulled out, because he got beaten up. Brock volunteers to beat up the guy who beat him up, which makes sense, but the crazy guy says that won't work, because giant corporations are evil. Yeah, I dunno either. That night, we are treated to a little montage of evil polluting people who apparently rape the environment for a quick buck. Way to be subtle, comic. 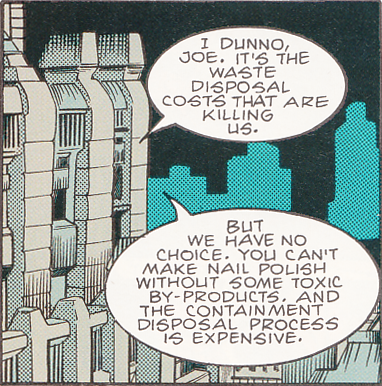 Anyway, the next day, Beck has a press conference, talking about the evil pollution, which makes Juggernaut target her. Venom fights back, and there's a big fight scene, which ends with Brock falling into a pool of talking red liquid. We are then left with a cliffhanger, assuming it wants to bond with Brock and the symbiote. Next issue, it bonds, and something really freaky happens. 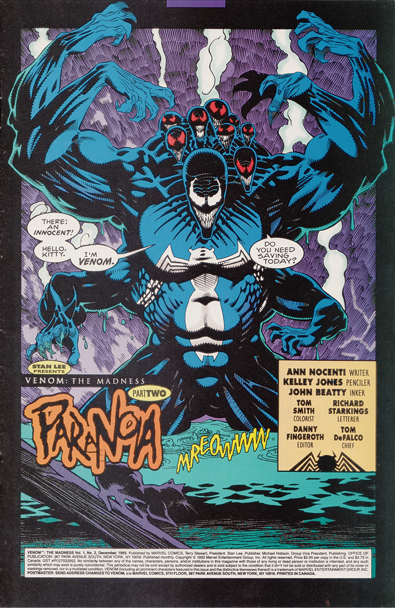 Um. Aaaanyway, Beck and the crazy guy talk once again about how giant corporations get away with everything, ever so subtly trying to tell the readers something. (I think you're supposed to like corporations by the time this is over.) We then cut back to the Captain Planet Villain, telling his lackey he doesn't want to know how he's taking care of the lawsuit. Anyway, at this point, Venom is having scary dreams, and wonders about the third voice in his head. You know things are bad when there's emphasis on the third part of that statement. After talking to the crazy guy, Venom becomes inexplicably stupid, and decides to kill the president of Scarmore. In the middle of the night. When nobody is there. Being that he became retarded for no reason, he kills a maid instead.

He then sleeps, has more crazy dreams, and says something that I may never forget.

THERE'S A FOURTH VOICE IN MY HEAD.

I can't even think about that sentence too hard, because I fear my brain will collapse in upon itself and I'll just go insane.I mean, seriously? A fourth voice? But don't worry, that's not the only bad part of this issue. Anyway, back to the President, the lackey calls Juggernaut again, and then we're back with Brock and Beck. Beck is a little reluctant to get close with Brock, because he's totally freaking batshit insane. Brock responds with something I think we've all tried at one time or another. 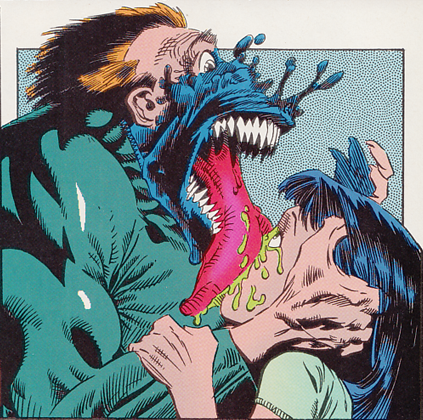 But that's not all! 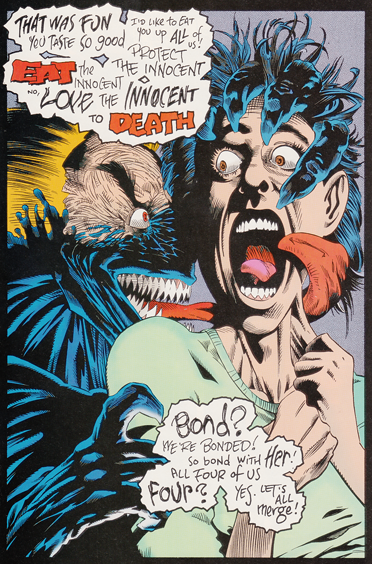 Just as Venom looks like he's about to use the symbiote in ways that would make the japanese blush, Juggernaut thankfully arrives, and starts beating up Venom. Eventually, a rip in space-time appears out of nowhere, and Juggernaut throws Venom into it. Then the issue ends. At that point, I was just really really confused. In fact, I am still confused.

The next issue, we find Venom trapped in a world of crazy. No really, it's a literal world created by insanity. Anyway, he wins by... beating up the personifications of crazy. He just beats them up. No moral revelations or anything, he just... beats them up. Finally, he leaves crazytown. By that point Beck has been kidnapped by Juggernaut, who begins to sympathize with her. That's right, it's reverse Stockholm syndrome. So Venom drops in, apparently not crazy anymore or something, drives away Juggernaut, and saves Beck. She then reveals she can't be with him anymore, because he's a freaking lunatic. He takes it well. At the end, he drops the mercury stuff back in the puddle, and proclaims what a great hero he is for being sooo crazy.

Now then, this comic was bad. Not just normal bad, this series goes to a whole new level of bad. The art is bad, the plot is bad, it's like whoever made it had only heard of Venom once! It tries to heavyhandedly give some environmental bullshit, but the only moral I got out of it is, "Don't merge your symbiote with evil sentient mercury, or you'll go crazy." Juggernaut is more stupid than usual, the president of Scarmore isn't even developed enough to be one sided, he's like half-sided. The only thing almost good about this series is the introduction of Beck, who is featured in later stories, but honestly this is probably the worst start she could have gotten.

So yeah, bad series, and an example of how one could tarnish the name of Venom, ruining his awesomeness. Before re-reading it for this review, I almost forgot how bad it was. But now I shall always know. Anyway, what do you think? Like the review? Too long? Too short? Comment! That's all for now, I'll probably do some Amazing Spider-Man next, so keep your eyes open. Farewell!
Posted by Walter Sojda at 12:18 PM