Oh, how I mourn for Amazing Spider-Man. See, I used to really like it. But now it's entirely terrible. It's a long story.

It starts with Civil War, a previously mentioned crossover wherein Spider-Man revealed his identity to the public at large in support of the Superhuman Registration Act. But then he realized Tony Stark was a nazi who was trapping his former friends in an inescapable prison in the Negative zone, so he joined the Anti-registration side. After Civil War was over, Tony had won, Captain America was dead, and Spider-Man was a fugitive. Kingpin, the fat crime lord guy, although being in prison, ordered a hit on Aunt May, since now every villain ever now knew who Spider-Man was. Aunt May got shot, Spider-Man went back in his black suit, beat the shit out of Kingpin, and swore Kingpin would die when Aunt May did.

So, Aunt May was in a coma, Spider-Man had committed a shitload of felonies, and he was married to Mary Jane, to the chagrin of the Editor in Chief of Marvel, Joe Quesada. The solution? MAKE A FAUSTIAN BARGAIN. In a storyline called One More Day, Peter and Mary Jane agree to erase their marriage from existence, selling it to the closest equivalent to the Devil Marvel has, Mephisto. As a direct result of this, Peter is single once again, lives with his Aunt, has no job, has no legal troubles, his friend Harry Osborn is alive again, and nobody at all knows who Spider-Man is. Even those who knew before he revealed it. Even freaking Venom. Augh.

So, to correspond with this, Marvel canceled all other Spider-Man titles, leaving only Amazing Spider-Man, which is released three times a month. It now has SEVEN alternating writers and FIVE alternating artists. In short: This comic is a mess. I tried reading a few issues after the big switch, and they sucked. To correspond with the new Dark Reign thing going on, there's a new storyline, called American Son. I bought a few issues in this, because I thought it would be good, since Osborn was a Spider-Man villain in the first place, so these might be worth reading. How mistaken I was. 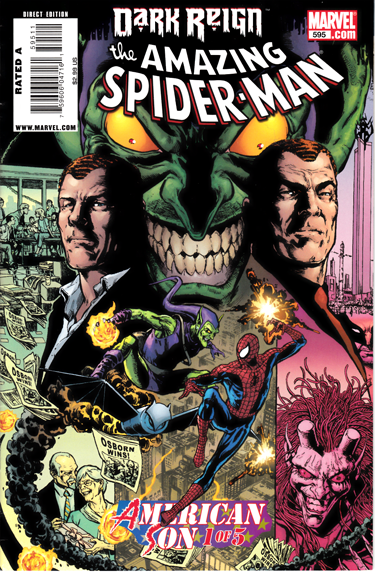 This comic begins with Peter and Harry Osborn, picking up chicks. They then see Norman's giant evil jet of evilness, flying to his super-evil malicious tower. Of evil. We then cut to Peter at work, at his new newspaper, Front Line. He goes on a big tirade at how evil Norman Osborn is, and everybody just laughs at him. Because he's totally not evil. At all. To be honest, Osborn really hasn't done anything evil yet. He's appeared to have been cured of his Goblin persona, and so far he's saved Latveria in what could be a diplomatic mission.

It then shows Spider-Man and Wolverine having a chat about Osborn. Spider-Man gets all whiny, while Wolverine suggests that Spider-Man just kill him. Wolverine then makes an incredibly subtle joke about Bush, comparing him to Osborn. Then they fist pound. THEY MAKE A JOKE ABOUT BUSH, THEN FIST POUND. THIS IS NOT WHAT YOU DO IN COMICS. AAAAAAAAHHH.

...Ahem. Anyway, the next scene is with Peter and his-now-apparent-enemy J. Jonah Jameson. I mean, these guys are just antagonistic. Jameson became the new mayor of New York (and subsequently a nazi), for reasons not adequately explained. But anyway, they are full-on hatin'. It doesn't really make much sense, I mean, Jameson only really hated Spider-Man, and since he doesn't know who that is, he should act the same way towards Peter. Before, Jameson was either ambivalent towards Peter, or in rare cases was almost a kind of father figure. But now they just hate each other. I guess Peter just didn't have enough enemies. 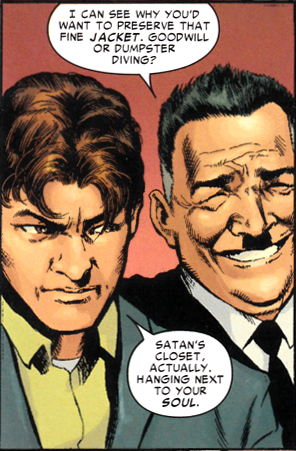 In other developments, Jameson's father is engaged to Aunt May. Peter found out about this in the worst way possible. You know what I mean. (THEY WERE IN BED. EEEEWWWW) So Jameson is having a party for vaguely defined reasons, and the guest of honor shows up. Who else but-- you guessed it, Norman Osborn! Nobody but Jameson wants Osborn there, since Harry is convinced Norman ruined his life, Peter knows he's the Green Goblin, and Jameson's dad says he's evil. Norman retorts that the old man is a deserter, and that pretty much settles the issue. Norman invites Harry to join his Avengers, which Harry promptly rejects.

That night, Harry's ex-girlfriend/supervillain comes calling, by breaking through a window. Her name is Lily, but she's called Menace, and she's the newest Goblin themed villain. She got a type of the goblin serum accidentally spilled on her, and she can change forms from a reasonably attractive girl to an evil horned Goblin thingy at will. She got beaten up by Spider-Man in an earlier storyline, and pretty much gave up supervillainy. Aaanyway, she shows Harry something shocking, at least, it is to Harry.

Next we see Norman talking to a hologram of his secretary, when he is pulled forcefully from his limo by some webs. Yes, Spider-Man kidnapped Norman Osborn. The man who's practically the leader of American defense. See, Spider-Man is angry that Norman would invite Harry to the Avengers. How would Spider-Man know that, you ask, since he can't let Norman know he's Peter Parker? He has spies on Jameson's staff. Yeah, that's believable. Spider-Man proceeds to beat the living shit out of Osborn, who at that point had done nothing directly against Spider-Man. I mean, at this stage, I'm on Normie's side. He was just minding his own business, trying to get his son in on the "We're all heroes" deal. Spider-Man just freaked out and beat a grown man for no adequately explained reason. Don't worry Norman, I'm rootin' for ya! 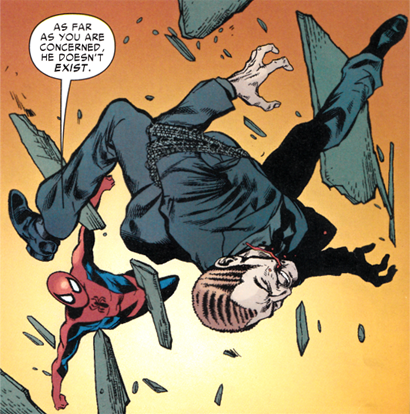 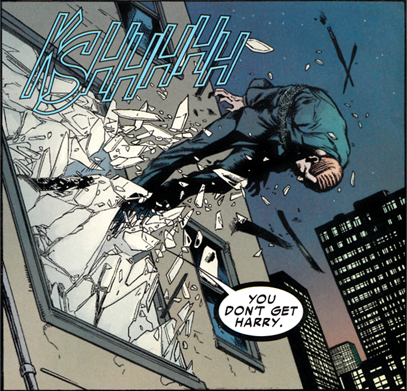 Anyway, Spider-Man inexplicably decides to kill Osborn by strangling him, because advice from Wolverine is always good advice. He stops when Norman answers his phone, and, surprise surprise, Harry accepted his Avengers offer! Then Spider-Man walks away in defeat. The next page, we see Harry kneeling next to Lily, who is now pregnant. That's how it ends.

This issue makes me sad. It makes me sad inside. I had hoped for a good Spider-Man issue, but this was just disappointing. Character derailment, bad writing, and a storyline that just doesn't make any sense plague the issue, in what I thought would be good. I mean, the art is still fine, and at least I can sympathize with someone in here. (Hint: It's Norman.) We'll just have to see how low we can go when I review the rest of this storyline.
Posted by Walter Sojda at 5:29 PM