Although it hurts me inside, I'll continue to review this farce of an Amazing Spider-Man storyline. This time, I'll write on the next two issues, so this goes by faster. 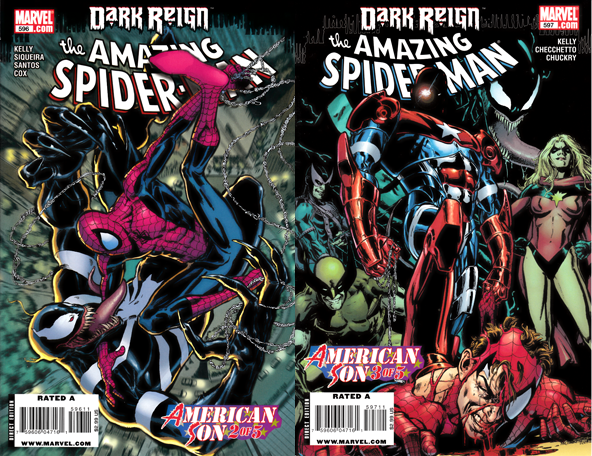 This starts a bit after the last issue ended, with Harry at a press conference joining the Avengers. We cut to Peter yelling at Harry, because joining the Avengers must be a terrible idea. Afterwards, Peter is so distracted he doesn't notice a burning building right freaking next to him. I don't really get the point of it though, it doesn't affect any other scenes, and we don't actually see him helping anyone out of it. I guess it's to remind us he does some superheroing between beating up government officials?

After that bit of random idiocy, we go to the Avengers Tower, where Norman is showing Harry around, and Harry wants to see his ex-girlfriend Lily. Norman lies and tells Harry that she doesn't want to see him. In another part of the tower, Norah, one of Peter's co-workers, apparently has a job there, flirting with a security guard who has access to the secure floors.

We then go to Aunt May's house, where Peter still lives for no reason, where Peter and Jay, Jameson's dad, have a little heart-to-heart about how Jay deserted in the army to see his son, Jonah, born. The studio audience goes "Awwww" and the scene ends. Back in Avengers Tower, Harry has to get some vaccines to work there, but resists due to the suspicion that it would be Goblin formula, but Norman assures him it's good, so he gets them anyway.

We next see Peter talking to what seems like nobody, until the last panel of the page reveals he's talking to Gwen Stacy's grave. Sheesh, that guy needs to get laid. Badly. Anyway, he then talks to Norah, who reveals her DEVIOUS plan to infiltrate Avengers Tower, and do... something. Report on it, I guess. She attributes her genius to fetal alcohol syndrome. Peter objects on the grounds that Osborn will find out and gut her like a fish, but she storms off, angrily.

The next part stars our favorite ripoff, Mac Gargan Venom. I could go on about what's wrong, but long story short: He's not the Venom I know and love. Anyway, it shows him talking to a hooker, her trying to negociate a price, while he talks about how pretty she smells. What happens next is what the people who made The Madness were kind enough to omit. To wit: 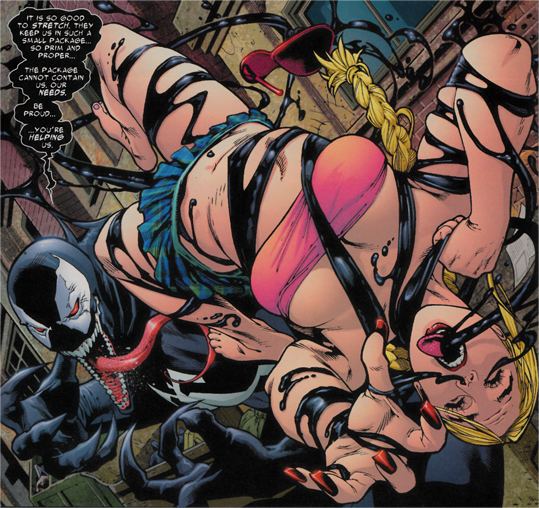 Yeah. The less we talk about that, the better. Spider-Man then attacks, unfortunately too late for my sanity, and has a strange device on his back. Hawkeye, who's supposed to be watching Venom, is instead picking his nose and killing mice with his boogers. Yeah. Spider-Man then goes to describe how he beat Venom, using a sound generator, and he describes its effect as "having diarrhea pumping through your veins." Yeah. Okay, whoever's writing this obviously isn't the most eloquent they have over at Marvel. If the burning building exploded, I would suspect it was Michael Bay. But I digress. Spider-Man throws Venom in a vault with the machine, even though, presumably, it's causing him extreme pain. Turns out Invisible Woman gave him the sound machine, and also gives him what looks like a black Spider-Man suit.

At Avengers Tower, Harry gets up from his bed, disables a security camera, and leaves. In the conference room, everyone's there, including Venom, who we can infer is Spider-Man, due to his thought bubbles. Osborn's speech is entirely different than it is in Dark Avengers, and by that, I mean he speaks like a 6 year old. He calls everyone by their villain names, rather than their Avenger names, and calls everyone a "pack of retarded children." Yeah. The issue ends when he reveals the name of his plans for Harry: American Son.

The next issue begins with Norman going into a secure floor of the tower, and Spider-Man's classy reaction.

They then go in, and Osborn shows him the armor-thing for American Son. It just looks like Iron Man ripoff armor with a badly drawn eagle on the chest and an American flag pasted on the shoulder. Not terribly inspired. Anyway, Osborn shows him the results of their testing of the Super-Soldier serum and its effects when combined with the Goblim serum. Osborn of course, still has no trace of the speech patterns he had in Dark Avengers, but I just don't care anymore. One of the hideous mutants tries to kill Osborn, but Spider-Man, entirely out of character if he's trying to act like Venom, kicks it to the ground. As Osborn insults the imposter-Venom, Harry gets ready to knock out some guards to get into Norman's office, (And he calls his father Norman rather than Dad, I don't know why.) but he gets pulled into the shadows by someone with glowy eyes.

At Aunt May's house, the power goes out, as an ominous voiceover talks about something great or terrible over shots of evil spying robots looking at everything. Back at Avengers Tower, it turns out Lily was the one that pulled Harry away, and Harry proceeds to tell her that he'll cure her of the Goblin formula, so Norman will let them be together or something. With the Avengers, Spider-Man over-acts, presumably to make up for his prior heroism.

After going to "Monitor Duty" on an elevator, Dark Wolverine attacks him, because he smells cleaner than the actual Venom. They fight, Spider-Man eventually wins, and Harry walks in. Spider-Man reveals that he is, in fact, the actual Spider-Man. Harry freaks out, asks Spider-Man why he's meddling, and raises a very good point.

Then Norman walks in, and Spider-Man makes up something, which Harry says is a lie. Spider-Man is then pinned to the floor by arrows, and Norman, although it's not something he would say, asks a question I was really wondering.

So then Norman punches him in the face, and presumably shoots him. All we see is him shooting the gun, then Spider-Man's hand on the ground with a pool of blood under it. Then the issue ends. Yeah, a cliffhanger can save this.

Okay, these two were just as bad as the first one, only now I can't even sympathize with Norman, because he talks like Batman when written by Frank Miller. Spider-Man acts like an idiot, and I think getting shot in the head was an adequate consequence. It'll be a week or two before I get the last two issues in this, so if you hate these reviews, there'll be a break. That's all for today.
Posted by Walter Sojda at 2:25 PM