Concept Corner: The Near Future

We all like to have control of our projects. Being told what to do by someone with authority over you can be restrictive and interfere with your vision. Aptly, a lot of creatives either reach the point where they become the authority, or try to break out and find their own means. Such an ideal works perfectly for Kickstarter, that crowdfunding site whose projects are now mostly playing cards and wallets. Or pens. Apart from those, musicians have funded albums using the site, and I actually got one!


Concept Corner: I Fight Dragons - The Near Future 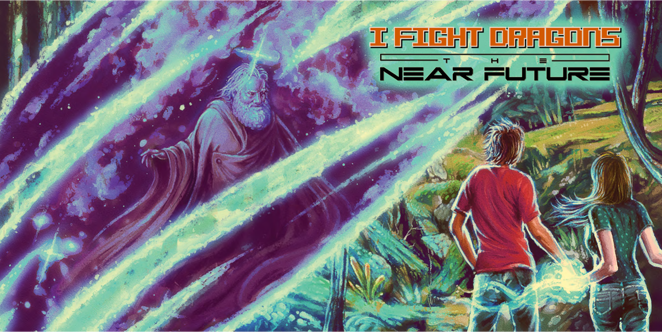 I Fight Dragons, a pop-rock/chiptune band from Chicago, funded their album, initially called Project Atma before being released as The Near Future in 2014. As I was a fan of I Fight Dragons beforehand, I pledged to the Kickstarter, though I will forever regret not having the $500 necessary to get my own theme song. (THAT'S ALL I'VE EVER WANTED) Anyway, it was pretty fascinating to see an album from the planning stages all the way to a full release. They released demos, showed concepts for the album cover, and we figured out pressing vinyl can be tricky sometimes. Oh, did I mention it was a concept album? Well, more like half a concept album.

The Near Future is a rock opera that comprises ten out of the fifteen songs on the album. Though that looks like two thirds, in terms of runtime it's a little more than half. I'll only be covering the section of the album that's actually concept, since that's what this is for. On to it:

Did that seem sparse? Light on detail? Oversimplified? Well the album ain't got much more for you. The main character, Boy, doesn't have a name. Neither does the... uh, love interest? Nothing has a name! Girl and Grandpa come from some far-off world or another dimension that is never explained, named, or expounded upon in any way. What's Boy like? He, er, he wants more out of life. He likes Girl, I guess. Why? Because she gave him glowy hands to fight the bad men. Why do the bad men have Grandpa? I dunno. Why do they have glowy hands? Beats me! Somehow the plot is both overwritten and devoid of details at the same time.

As his adrenaline recedes, he
suddenly realizes that even
though she is battered and
bruised, she is the single
most beautiful girl he
has ever seen.


Just as they are about to reach the exit, four more
dark-suited men and one gigantic man in a white
suit step in and bar their path. If they’re going to
escape, they’ll need to get past these five. After
a tense moment, the suited men charge and the
true battle begins.


Half of the ten concept songs are instrumentals. I don't have anything against instrumentals, they're often necessary for a good concept album once in a while. But fifty percent? A couple I really enjoy, namely "Battle" and "Rescue." The rest seem to be there to add more liner notes to what never amounts to a well fleshed-out story. Maybe if Girl had a part in some songs, or if we find out anything about anybody. Names! Reasons! Give me something more than some trite anime-lite story that props up cardboard cutouts and calls them characters. The song "Jimmy and Sally" from the non-concept portion of the album has a better story, because not only does it name the characters, it describes their personalities! I know what Jimmy and Sally are like! Boy and Girl? Nothing.

Are there recurring themes? Sure, if you can call them that. "Eighteen" is a pretty good introduction song, Boy is your everyman teenager, which isn't a bad place to start. He's poised at the start of his adult life with no real idea of what to do and set upon by other peoples' ideas of how he should be.


That's a nice jumping-off point, sort of like Nikki from Operation: mindcrime. Problem is, you have to develop from there somehow. The only real change he makes is that he can give himself glowy hands and fight at the end. And he falls in love with a girl whose name he doesn't even know. It seems they didn't try very hard on the story, like being a concept album was the novelty they wanted, but the story itself was an afterthought. At least the music was good.

If anything else, The Near Future is good as a regular album. I Fight Dragons' big hook is the addition of chiptunes (i.e. 8-bit soundchip music) to a standard pop-rock ensemble. "Battle," one of the instrumentals, is the best example of this mixture on the album. It's used more like a synthesizer on an 80's song than the main event, which works well. You'll get a little bit here and there, though there is one song done entirely in chiptune, "Rescue." It's not exactly Animaniguchi, but it's a fast, boppy track. The video game noises they put in there are a little distracting, but make it sound like an authentic NES background song. The chiptunes are arranged by Brian Mazzaferri, who triples as lead vocals and rhythm guitar.

There's a leitmotif that runs throughout "Battle," "Rescue," and "Time to Fly," a bombastic little chiptune riff that adds a little cohesiveness the story itself was lacking. In fact, I enjoy the album more when I ignore the official story altogether. It works pretty well in that way, if you skip a couple of the instrumentals.

The lyrics themselves work well on their own, since most of the heavy lifting in service of the story is done by text-only liner notes. They're pretty broad as far as themes go, "Eighteen" about starting life with no direction, but that can be a little freeing sometimes; "Time to Fly" is about unleashing your full potential, finding a reason to prevail in a desperate situation. "Another Day," one of my personal favorites, is as simple as romantic regret, losing your chance at something more and having no idea if you'll have another opportunity. You just want to get over it, but you can't.

Another week goes by
The summer drags on
Turns out the time won't fly
When you're trying to move on
And in the blink of an eye you see her face
Then she's gone and run away
Why can't you find her?
Another day
Another reminder of your place


So, is The Near Future a bad album? I wouldn't say so. I give it a listen now and again, and though there are a couple mandatory skips, the whole story half is pretty enjoyable to listen to. The issue is when you try to get more out of it than just what the music itself provides. Lines don't really take on more meaning when you read the story, the extra details aren't substantial enough to draw you any further in. It's a little sad, really. If they had just gone whole-hog on making a concept album, I think they could've made something really good. Hedging your bets on a project like this doesn't really work. It's hard to get anyone on your side if you don't seem fully committed. If they don't really believe in it, how can I? On first glance, it looks like they've made half a concept album, but on further examination it turns out to be less than that. They put in half the effort, as far as story is concerned, they gave it half the runtime, and it's only half as enjoyable. That doesn't mean it's bad, it's just a fraction of what it could have been.

P.S. I Fight Dragons is currently funding another album on Patreon, in a sort of faux-Kickstarter way. Here's hoping I like it a little more than this one.