Or: How I Learned to Stop Worrying and Love the Fishman

Death of the Author is a tricky concept for a lot of people. Can you really look at a work without considering the author's personal views and convictions? Do those factors influence the work even if the reader isn't aware of them? If one discovers an author holds despicable views, does that change a previously enjoyed work? How do you divorce the two? Is it a good idea to do so? This is, surprisingly, no less complex if the author is, in fact, dead.

In my review of Lovecraft Country, I mentioned how the novel reckons with the views of H.P. Lovecraft in its setting and story. Though set in a world where Lovecraft is real and his worlds are fiction, it contains the feel of a Lovecraftian tale while acknowledging that Lovecraft himself would likely feel a racist animosity towards the main characters. Most Modern Mythos stories, this is, stories inspired by and referencing Lovecraft and associates, prefer to leave this topic unaddressed for the most part. On the contrary, what many of them do is set themselves in the world created by Lovecraft, and make him a prominent figure who lives in that world.

I don't think that is a good idea.

If we're speaking strictly in structure and story reasons, including Lovecraft is an easy way to pull the reader out of the story. It's likely the reader already knows that this is Mythos, and name-dropping an author only serves as a reminder that this is all fiction. If I'm interested in the direction a story is taking, I lose that interest the minute someone encounters Weird Tales magazine. There's no need to remind the reader that Lovecraft exists and wrote the inspirations for many of these Modern Mythos stories. A much better move in this case would be a mangled interpretation of Lovecraft's name, a la Klarkash-Ton, a name Lovecraft created as a reference to his friend, Clark Ashton Smith, or to use a recurring Lovecraft protagonist like Randolph Carter.

Another minor unintended side-effect of a Lovecraft cameo in a story is to denigrate his writing skill and imagination. If you feature the author of a series of stories as living in the world of their stories, then by extension they become less writer than reporter. In this scenario, very little came from the head of the writer, rather these are transcribed accounts of real life events. Not that I'm putting down non-fiction books or serious reporting, but for something like cosmic horror, it's a bit of an insult to the person who dreamed it all up to imply they didn't.

But that's not what I'm really here to talk about. What I mean to discuss is how this vindicates the author's worldview. Normally, this may not be a big deal; most authors, especially nowadays, aren't bigots. (With a few increasingly egregious exceptions.) But with Lovecraft, he was especially racist even for his time and having just cursory knowledge of this sheds a disturbing light on his stories. "The Shadow Over Innsmouth" is about the dilution of good, New England bloodlines with invaders from across the sea, making the offspring slow witted and grotesque, with bugged out eyes and enlarged lips. I hope I don't have to tell you what the subtext is. In other stories, Lovecraft is only less subtle, as in "The Call of Cthulhu" where the only real worshipers of Cthulhu are poor black people in the Louisiana bayou. And when you position Lovecraft as truthfully relating the state of the world in your story, you bring all of his racism with you.

Featuring Lovecraft as a character is the most obvious way to make this mistake, but unfortunately it's not the only way. Really, all you have to do is continue where he left off without examining the implications of the original work. To wit: There's a short story featured in The Book of Cthulhu II called "Once More From the Top" written by A. Scott Glancy. It's a detailed account of the military raid briefly mentioned in the opening of "The Shadow Over Innsmouth." I know the effect the author was going for, a mix of horror with military thriller, marines gunning down fishmen and their weird monsters. But with my current context, it came off as an act of barbarism by a militarized state against a genetic minority. The missing persons caused by the Deep One rituals are more or less forgotten over the fact that the crossbreeding is seen as abomination. Perhaps the townspeoples' violence against the narrator of "Shadow" is justified, in that his actions the moment he escaped lead to a wholesale massacre of the town.

In a more skewed but garish example, we have the graphic novel Neonomicon written by Alan Moore. You may recognize this name as the impetus for my Open Letter to Alan Moore way back when. I still believe everything I wrote then, but with a bit more nuance about it. There's no doubt about it, I heartily dislike Neonomicon. Alan Moore took what he perceived to be Lovecraft's phobia of sex and decided the best way to interpret Lovecraft was to add rape. I could honestly criticize it all day. What's important for this topic is that somehow he both invoked Lovecraft as someone in the comic's universe but also got all the details wrong. 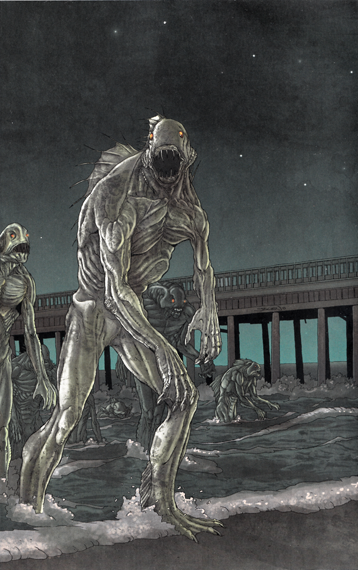 See, they reference Lovecraft as an author fairly frequently in Neonomicon. They allude to the fact that he must have seen all this cosmic horror shit and interpreted it into his own books. But then there's also a deranged sex cult which brings out a Deep One to rape the protagonist. Moore, in writing, assumed the Fish People were primarily propagated by rape, because that is what he thinks about all the time. But really, the first Human/Deep One mating was done with Obed Marsh and what we can assume was a willing female Deep One. The horror from Lovecraft's end was never about the act of sexual congress, so much as the resultant progeny. And Neonomicon gets that wrong too, as the protagonist ends up pregnant from the Deep One, but with Cthulhu for some reason. It has the effect of glossing over Lovecraft's racist implications and replacing them with the much more banal horror of rape. I just don't really understand what message Moore was trying to get across; the most I can tell is that it's criticising Lovecraft for obliquely referring to something that might be sex, but not showing it in lurid detail, as if that was Lovecraft's real problem. And not, you know, the racism. Which, oddly enough, is mentioned, but not dealt with as a serious topic. It's treated as just a bit of trivia instead of something that informed with works.

So okay, those are some examples of how you inadvertantly propagate Lovecraft's racist ideas. How, you may ask, does one create a work inspired by Lovecraft but not necessarily influenced by his bigotry? I have one answer for you. The Shape of Water. 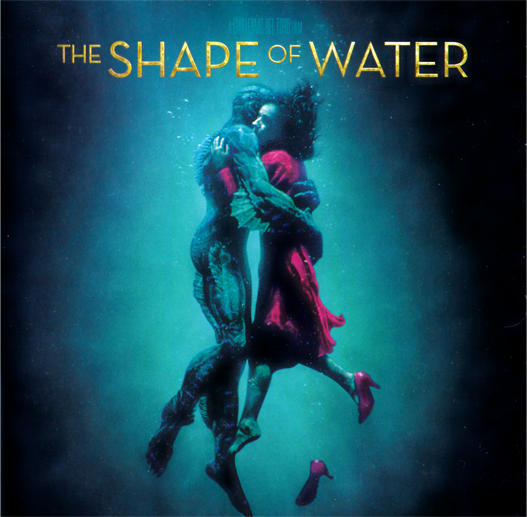 The Shape of Water is a 2017 film directed by Guillermo Del Toro. Everything about this film astounds me. From the plot, to the effects, to the popular and critical reception. This film won an Oscar! The movie about the lady fucking a fish man! What I love is that it's the Anti-Lovecraft movie. It takes elements of "The Shadow Over Innsmouth" and inverts them entirely, making the good guys into the bad guys and vice versa.

The Fishman, also known as The Asset, is found and captured from a South American river by a secret branch of the US Military, and held in a clandestine facility where Elisa Esposito, a mute woman, works as a maid. Eventually she finds the Fishman and communicates with him through music and a bit of sign language. They begin to bond, with Elisa seeing some humanity in the creature. Then she rescues him from the lab and they fuck. In a bathroom she filled with water. And despite how weird this sounds at first blush, the film frames this as a positive thing. Elisa finds fulfillment with the Fishman, she cares for him and he cares for her. The film wraps up when the military man recaptures Fishy, and Elisa with her friend have to go save him. Elisa ends up shot, but after being puled into a canal she's healed by the Fishman and the scars on her neck turn into gills.

It's essentially a film based on the prompt, "What if we made Innsmouth sympathetic and romantic?" It's sort of like a reverse The Little Mermaid, where the lady still can't talk but it's the dude who comes from the sea and they both end up underwater. The Fishman, instead of being a source of corruption from outside, is a revitalizing force, symbolically as well as literally. The film is about the transformative nature of relationships to the participants themselves, instead of being really concerned about what kind of kid could pop out at the end. The man with Lovecraft's viewpoint is the villain, needlessly violent to contain this creature which, if anything, is too close to humanity.

Although Del Toro has said in interviews his primary inspiration for the film was The Creature From the Black Lagoon, I don't think it's a stretch to say there's definitely some Lovecraft in there as well. He's been known as a fan, having been featured in documentaries about the author, and has been trying for quite a few years now to make an adaptation of At The Mountains of Madness. Not to mention Elisa's odd circumstances and eventual amphibiousness lend themselves to the interpretation that she was always going to end up underwater, like the narrator of "Innsmouth."

It's difficult when stories you've enjoyed become tainted by the light of further knowledge or a more critical eye. Once you know something, you can't un-know it, and it's as if the story you once read has ceased to exist. In my younger years I finished "Innsmouth" without a second thought, not yet quite able to connect the dots. And as childish as I may have been then to overlook the unsettling overtones, it would only be more childish now to pretend I had never noticed them. Lovecraft's case is certainly simpler than some, with most of his stories in the public domain and the fact that he won't be seeing any of the money from collected editions. Things get thorny, however, with those continuing in the Mythos tradition, and you can't be sure if they're blindly or purposely repeating the same themes that make Lovecraft so divisive. The most you can do is keep your eyes open, be willing to learn, and take the time to reexamine yourself and the media you consume.
Posted by Walter Sojda at 4:22 PM