Hello again, blog readers. Remember when Spider-Man used to be good? No? Oh. Well. Remember when it was mediocre? Okay, good, we're on the same track then. You see, I can take a mediocre Spider-Man comic. That's pretty much why I haven't been reviewing them lately. If it's unusually good or bad, it's worth a review, but a mediocre comic just leads to a mediocre post. Today, we go past good, past mediocre, past bad, and into the horrible depths of what I like to call comic hell. Yes, today, we get: 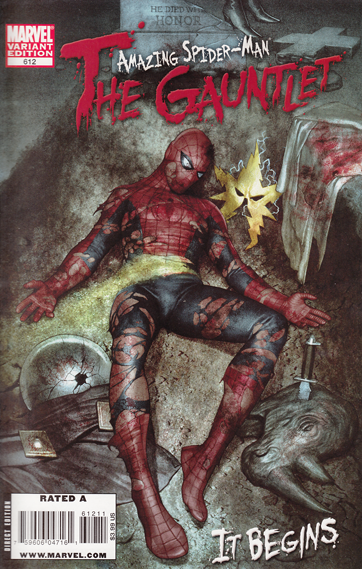 Now, I've read bad comics before, reviewed them. Unfortunately, Spider-Man comics have been some of them. Somehow I always get my hopes back up whenever I hear about a new "revolutionary" storyline in ASM. So when I heard about a new story called "The Gauntlet" I figured it might not be so bad. I was wrong. So, so so wrong. Anyway, let's just jump in.

The story begins with some guy with electricity powers (I wonder who?!) sitting in a bar, while he monologues on the situation. 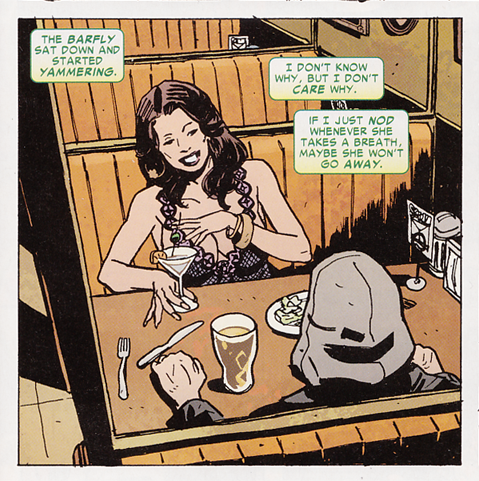 He ends up electrocuting the girl sitting across from him, so he jams a fork into an outlet to create a blackout so he can escape. As he runs away, we see some lightning bolt shaped scars on old Electro's head. Which got there for no reason. 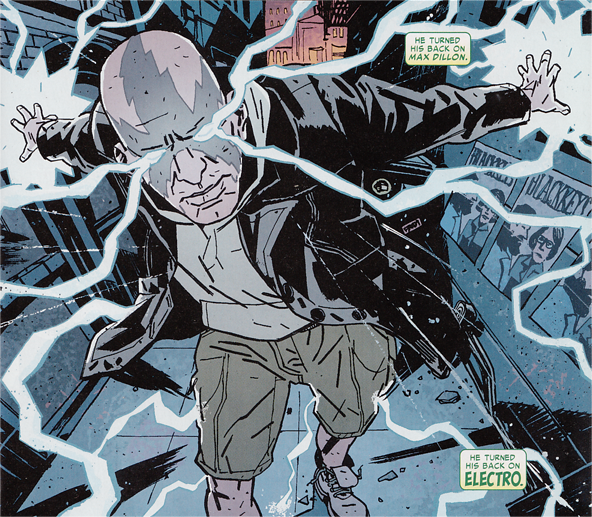 We then cut to Spider-Man, who complains about a recent heatwave hitting New York and wonders about the currect blackout. He performs his quota of superheroics for the issue by... saving a dog from falling out a window. Yeah, pretty much, the only heroic thing he does in this issue is save a dog. Not a person. A dog. This is going to get painful.

He heads to his old workplace, the former Daily Bugle, now called the DB, to see if Betty knows why there's a blackout. 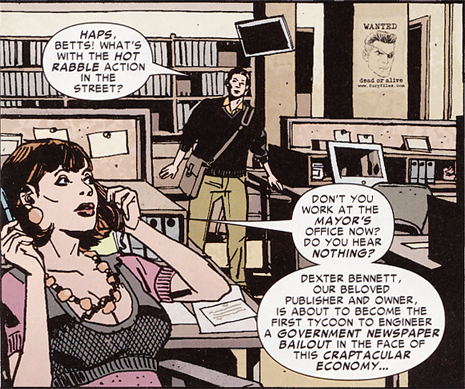 While there, he also finds out Dexter Bennet, the new owner of the DB, has applied for a bailout from the government, and got it. Oh god. No. No no no. Whenever they bring politics bullshit into this, the whole thing goes to hell. Please, just be a passing mention, don't let it affect the story...

Anyway, we cut back to Electro, in a lab of some sort, powering The Thinker's machines with his electricity, and asks when he can get cured. Thinker informs him the procedure he would need would cost upwards of a million, and that he probably doesn't have that much.

Oh man, they really are going through with this, aren't they? This won't be good. Okay, so. We follow Electro as he leaves the lab, as he complains more about the government's bailouts and how he isn't getting any money. After picking up a copy of the times announcing DB's bailout, he explodes a newspaper stand. We shortly cut to Mayor Jameson, lauding how people hate Bennett and his bailout. He suddenly notices Electro on the TV, who decided he needed to look like an idiot.

WHY. WHY IS THIS HAPPENING. WERE THE WRITERS PRESSED FOR STORIES SO THEY WATCHED CNN OR SOMETHING?! AAAH!

...Okay, so, apparently, Electro's angry rant inspired people or something, so they protest the DB. 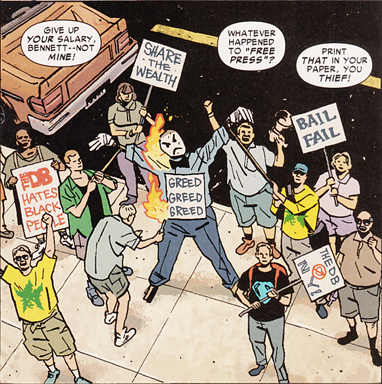 We then cut to Peter, in his apartment. Okay! Good! Back to Peter, no politics. I don't see any way this could go wrong! He mentions how he's been out of town for three days with the Avengers, which I actually liked, because usually they don't address how a character can be in more than one series at a time, as Spider-Man is with his solo series and New Avengers. So he and Michele are talking, mostly her being a bitch and trying to charge five bucks to sit in front of a fan. Then she brings up how he can't hold his liquor. (A reference to #601, wherein he got super smashed at his Aunt's reception and ended up sleeping with Michele.) 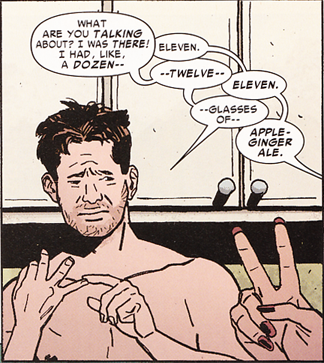 Wait. Wait wait. So Peter never got drunk in the first place? You're trying to tell me he had a placebo effect hangover and memory loss? I can believe he has spider-sense, but somehow I don't see this making sense. Any sense at all. Augh. Anyway, he sees Electro on the computer, so he decides to go to city hall to check out Electro's latest rally. Even though he hasn't done anything illegal quite yet, Spider-Man decides to beat him up now, just to be safe. As Spider-Man fights Electro, mostly unsuccessfully because of Electro's now poorly defined powers, the crowd quickly turns against Spider-Man.

As Electro makes another hit, Spider-Man falls into the angry mob, giving us the last page (Thankfully) of this comic. 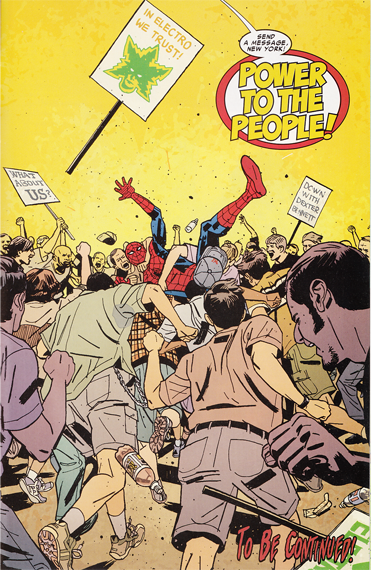 Okay. So. What's to say? This comic was the definition of terrible. I didn't like the art style, Spider-Man does zero heroic things, there's a retcon of an event only 11 issues ago. And that issue WAS BY THE SAME WRITER. AAAHHH. Rather than being creative and making a good story, they decided to take an actual issue, but add idiocy and superheroes. I, personally, don't like the bailouts, but the fact that they're addressing this in a COMIC is infuriating! I haven't hated a comic this much since Venom: The Madness. But even then, that comic almost seemed like the more harmless kind of stupid that doesn't worry me. With this, however, it's only the first part of a big storyline. I severely doubt I'm going to pick up the rest of this storyline when it comes out, because, frankly, it's a mess. I hold Spider-Man up to a bit of a higher standard than other comics, because I really like Spider-Man, but then Marvel goes and makes the worst comics out of its flagship series.

P.S. As I'm reading the letter's section, I see one really long letter of someone complaining about how he doesn't like Spider-Man nowadays. Hey! Me too! 'Specially with-- What? You didn't like that he got drunk? You didn't like it that he had sex? What? You seriously want him to be a perfect saint all the time? I mean, what he did made perfect sense for his character and the situation he was in at the time. I'm willing to bet this one complaining letter is what prompted them to retcon his drunken-ness, for fear they may alienate his more straight-edge fans. But apparently nobody seems to care about the downhill spiral the writing has taken, or the general decline of story.

Anyway, that's enough angry ranting for me today, so I'll leave you with that. This is the W Defender, and that was a terrible comic.
Posted by Walter Sojda at 11:30 PM