Now, I probably haven't mentioned Spider-Island yet, have I? It's the current big thing happening across the Spider-books, along with the Avengers and Cloak & Dagger. The premise is that the Jackal, one of Spidey's old villains, made these bedbugs which spread a disease which gives you Spider powers. Long story short, eventually it turns you into a giant spider, and they're all under the control of another previous Spider-Man villain, The Queen. This time, we follow something other than the main story. 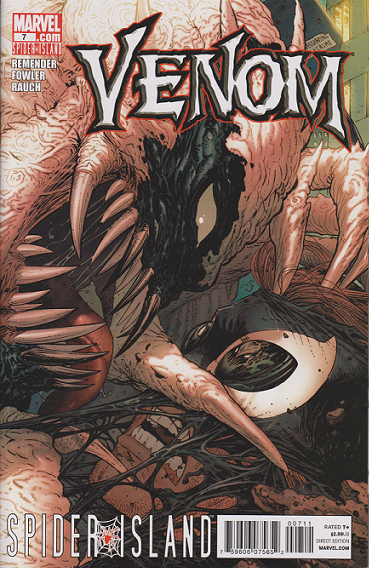 In previous Venom issues, he fought one of the Jackal's minions called Spider-King, a gigantic humanoid Spider, mutated from (SPOILER ALERT) Captain America. After taking him down, Flash disguised himself as the Spider-King to infiltrate The Queen's ranks.

Where our comic begins, a man who's daughter has been infected by the Spider-Virus finds a nasty surprize in her bedroom. 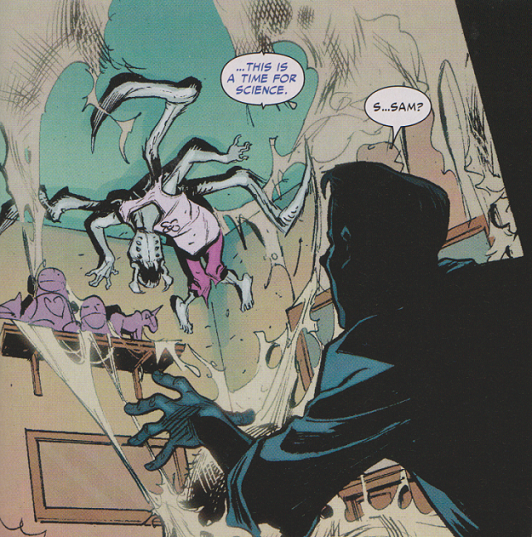 He takes her to Our Lady of Saints church, where we see someone familiar. Well, okay, probably not all that familiar. 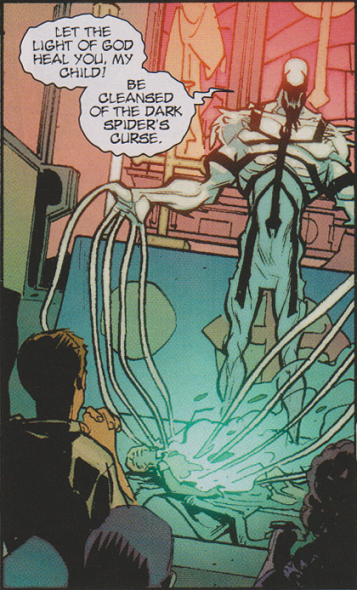 That's our good friend Anti-Venom, who comes pre-packaged with all kinds of fun problems in whatever comic he's in. We don't stay with him long though, we cut to a clone of Miles Warren, the civilian identity of the Jackal, walking through the chaotic streets back to the secret lab. He reports back to the rest of the Miles Warrens, because Jackal cloned himself a bunch of times to have lab assistants. Well, if you can't get something done right...

He's there to report to Queeny that Anti-Venom's all healing people. She sends Spider-King to go kill him, so Venom reports back to base that someone's curing people of the Spider-Virus. They report back to Reed Richards at the lab, who says he's gonna need Anti-Venom, so they should go get him.

As Flash swings towards Our Lady of Saints, he gets a call from Betty Brant, about his dying father. Flash's dad is in the hospital due to liver failure, likely on his deathbed, and Betty wants Flash to try and make amends before it's too late. Flash is a little bitter. 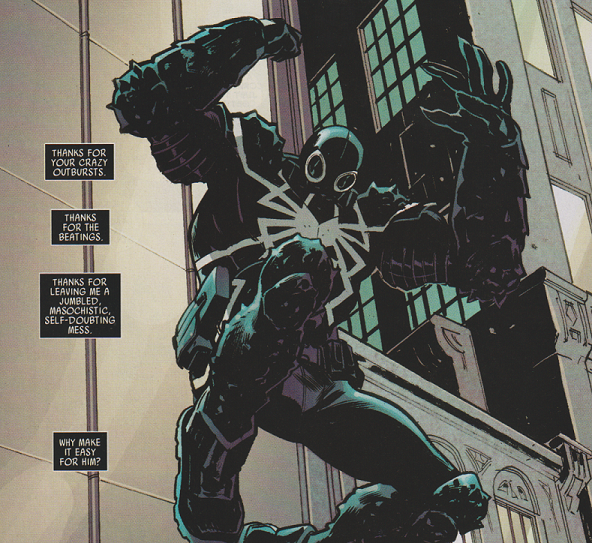 Flash arrives at the church, where I'm sure he'll explain to Anti-Venom that he can do the most good by going to the lab, and it'll be juuuuuust fii-- 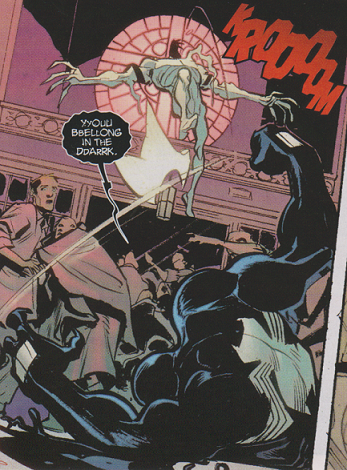 So we get the cliche of superhero books, where both heroes have problems with communication, so rather than realize they're both on the same side and just work together, they fight. I don't understand why every superhero has the compulsion to throw punches first and ask questions never. I mean, yeah, eventually most of them end up working together, but nothing ever happens without the fight first. I mean, this probably stems from the fact that all comic fans want people to fight, and things would get kinda boring if everyone just talked it out, but still, it's getting a little old.

It's worse with Venom because I think there could actually be an interesting dialogue between Venom and Anti-Venom in this case, but too bad.

Anyway, Anti-Venom calls Venom a demon, they fight, and then the symbiote tries to take over Brock again. And-- Wait, what? It works?!

I CAN'T BELIEVE IT, REAL VENOM'S BACK! I'M SO

Oh nevermind it's back on Flash now.

The odd part about this scene is that even though I would normally be thrilled to have Brock back as Venom, you can see Brock is so completely terrified by that concept, as he tries desperately to rip the symbiote off while it covers him, I actually feel kinda bad for him. I mean, I never liked Anti-Venom as a character, but the art really drives it home how much he doesn't want to be with the symbiote ever again. 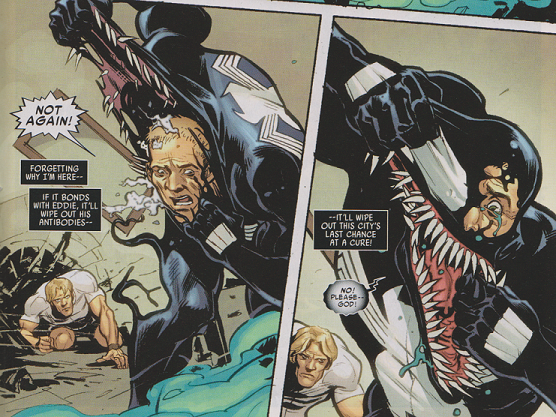 So Brock passes out and Flash delivers him to the lab, where Reed is confused by the random fighting that happened for little to no reason. Flash finally shows up at his dad's bedside. 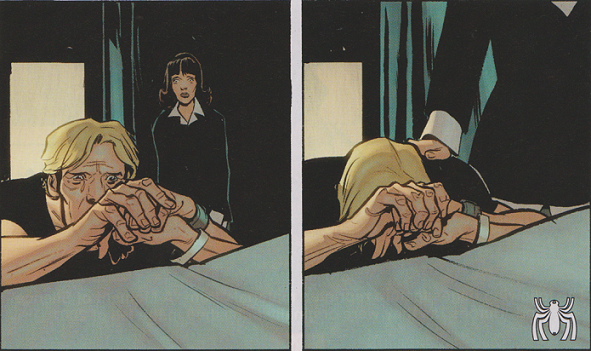 So, uh, that ended on a down note.

So that's our Venom Spider-Island crossover! I mean, it wasn't bad, but considering most of the issue was based on a giant fight that didn't need to happen, and the dialogue boiled down to:

"VENOM THAT SYMBIOTE IS EVIL"

I mean, nobody really gained anything in that exchange, just like when he fought Spider-Man. Talking is not Flash's strong suit. It seems like the whole point of this series is Flash losing his shit whenever anything happens, and then somehow he wins sometimes. Not the most nuanced writing. Of course, the parts concerning his civilian life, particularly that with his father, are actually pretty well written. Flash is bitter and angry, and you're usually on his side. Trying to control myself, this is the W Defender.
Posted by Walter Sojda at 12:08 PM