Well, the DC reboots are coming out, and I told myself I wouldn't buy anything. But then... I saw Batman. I mean, how can I resist Batman? Plus, I heard they were keeping old continuity, so how could I go wrong?! Well, this. This is how. 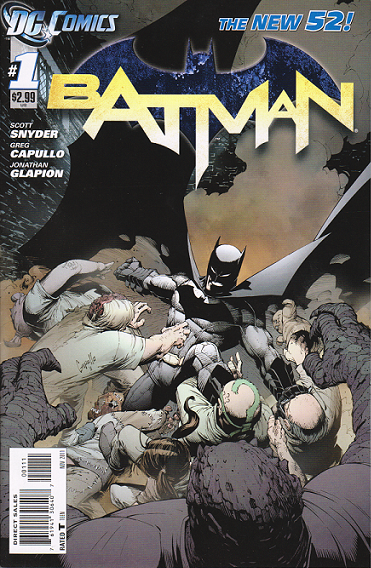 Now the comic starts in probably the most cliched way Batman can, and that is in the middle of a breakout in Arkham Asylum that Batman is beating down. Of course, there's some villains I don't really recognize.

So they throw Batman through a wall, and a weird team-up occurs. 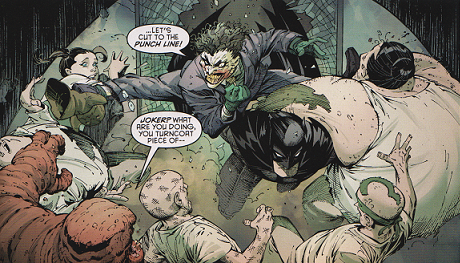 As you can see from that panel, some villains have gone through the usual redesign that follows a reboot like this. Joker is much more Heath Ledger-y, they made Two-Face look like half his face melted off, and the Riddler has a stupid question mark mohawk. Artists must have a penchant for making the Riddler look entirely dumb.

So we cut to the Gotham PD rooftop where Batman explains to Gordon the source of the attempted breakout, a guard getting a cut, all done before. I guess they just want to give a sense of what normalcy is for Batman, but to me this is just coming off as overdone.

Back at the Batcave, Bruce broods a bit, before the Joker pops up! Psych, it was just Dick the whole time with a mask on. 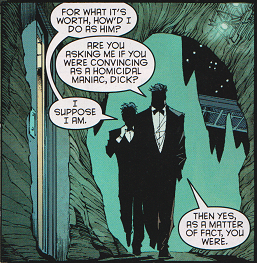 So Batman and his old Robins all head to some presentation thing Bruce is setting up. You know, the ones that happen every time where he says how he's going to fix Gotham with some building project, or charity, or something. What's it this time? 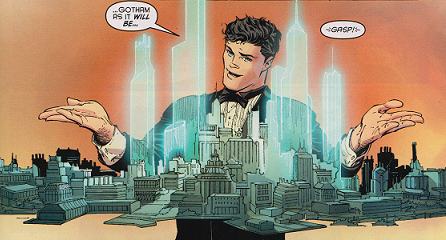 Okay, a building project. Anyway, after his little show, a man named Lincoln March, a mayoral candidate starts talking to Bruce. Then we see the talent this artist has for designing characters. 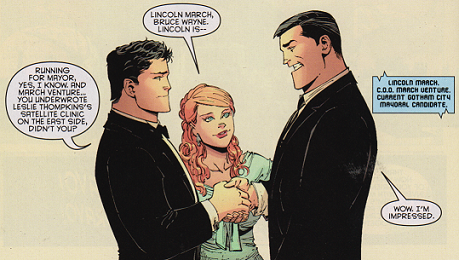 What I'm saying is, there's very little that differentiates him from Bruce, but maybe that's the point. No doubt he'll become evil by the end of this storyline, and end up as some sort of dark mirror for Bruce. You know, like Hush.

Bruce spies Gordon talking on the phone, catching a phrase or two like, "How many stab wounds? God." So Bruce excuses himself from the party.

Batman shows up behind Harvey Bullock at the crime scene, who leads him to the murder victim, who's been stabbed a shit ton of times with throwing knives in everywhere but major arteries. Harvey lets Batman take one because, hell, why not? Batman also takes a skin sample from underneath the victims fingernails. You know, now that I mention it, shouldn't the police be doing that kind of work? Why is nobody else there?

"Hey, someone just reported a murder downtown. Should I go grab CSI or...?"

Anyway, Batman smells something, so he uses Harvey's cigar to light up a message put on the wall, that says, "Bruce Wayne will DIE tomorrow." Harvey starts talking about Bruce, and at the same time, the DNA results come back. (Which, in real life, would not be nearly that quick, but who's counting?" 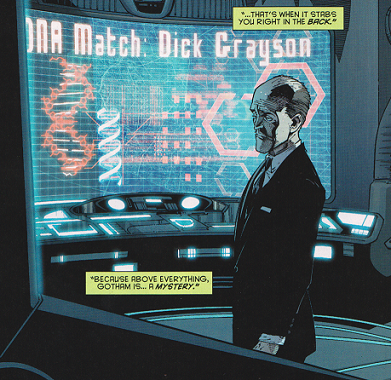 So that was the new Batman #1. Personally, I didn't really like it. It felt bland and overdone. Of course, I'm hardly unbiased here. You all know my thoughts about the Reboot, so you probably know I was out to dislike this comic. I mean, there's nothing really wrong with it, it just didn't do anything crazy. Is that really so bad? I mean, this is the first comic, the one you're supposed to start with. Maybe I think it's overdone because it's supposed to give a sense of the norm to new readers. I just hope this doesn't lead to all the writers retreading what's already been done to make up for what was erased. I'll have to see what the next issues are like before I make a final judgment on this series. Still a bit apprehensive, this is the W Defender.
Posted by Walter Sojda at 3:02 PM