Hey everybody! Now, I'm sure you all remember the whole Death Of Spider-Man thing right? Yeah. So he died. After that we got Ultimate Fallout, which was everyone being sad because he died, but one issue, #4, showed what press releases revealed as the new Ultimate Spider-Man. All you saw was his face in that issue, but newspapers and the like covered it like crazy, all talking about Miles Morales, the African American/Hispanic Spider-Man. Finally his debut issue's come out, so it's time for: 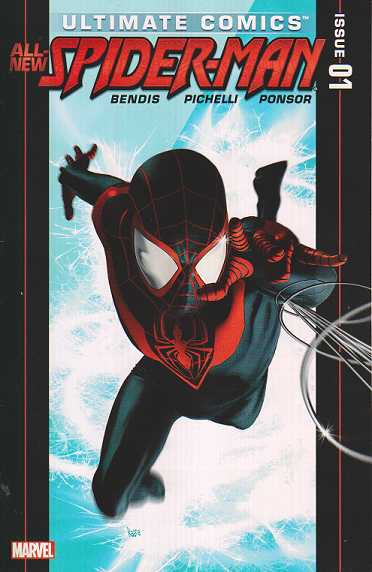 Our comic begins, apparently, eleven months ago, in what seems to be Norman Osborn's lab. Not the explody one, I mean a new functioning one. Somehow. I'm not really sure when this is set. Anyway, he's talking to his new scientist, Dr. Markus, about the myth of Arachne, and blah blah first spider. And so he explains that it was he who created Spider-Man, but they didn't keep adequate logs so they can't reproduce it. Wait, so Norman knows who Spider-Man is, but he's not on the run from the law because he killed people as a giant green fire guy? When did he set up another lab? Nobody wants to answer these questions. Norman lets Markus know what happens if you break the NDA. 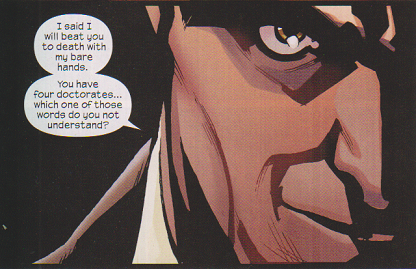 While Dr. Markus is distracted, one of the test spiders escapes. I WONDER WHAT COULD POSSIBLY HAPPEN. Next they show a front page of the Daily Bugle, likely as a recap, which says that Norman Osborn has been revealed as a giant monster who is now in SHEILD custody. So I guess we're to assume this is before he went all crazy and died killing Peter Parker? That'll probably never be adequately explained.

We cut to a shot of an old, decrepit Osborn Industries building, and then someone scaling the wall. So, I guess they jumped ahead a bit? No idea when this takes place in relation to the last Ultimate Spider-Man title. But yeah, the burgler is revealed to be blue-Deadpool.

As he's stealing stuff, the escaped spider climbs up his leg and into the bag. No biting, apparently. He just wanted a ride. The guy leaves.

We then cut to Brooklyn, and some random people I don't care abo-- Wait, these are the protagonists? Awww. 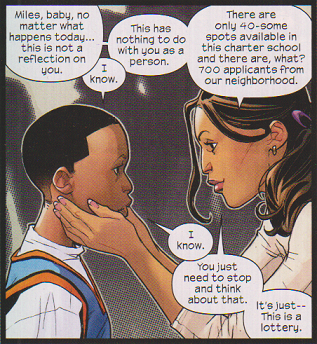 So they go to the lottery and, of course, Miles is picked. Who expected anything else.

Anyway, Miles decides to go visit his Uncle Aaron. Uh oh. I don't expect good things for his future. Anyway, the uncle decides to go get popsicles, leaving Miles with his suspiciously familiar bag. (THE UNCLE IS BLUE DEADPOOL.) A spider crawls out of said bag, and shows all of us that Miles is not the brightest kid. 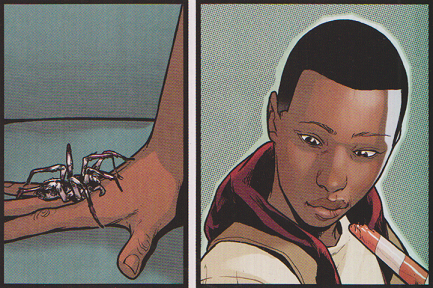 The spider bites him, which affects him a bit faster than it did Peter.

When Miles wakes up, his dad gets there, thinking that his uncle did something. As they argue, Miles flees. After his dad passes right by him, Miles notices something weird. 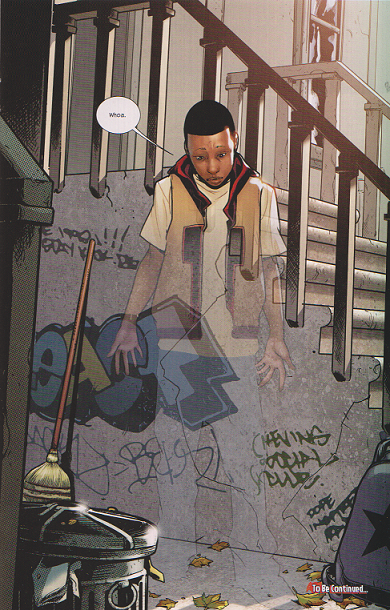 Now, I didn't like the fact Peter had to die in the first place, so anything that comes after wouldn't really sit well with me. I don't really have any idea when this is set in the Ultimate Universe, where before everything was pretty coherent as to time. Then they felt the need to shoehorn the same origin story for this new guy, even though it's incredibly unlikely and is completely unnecessary. Plus, he's like, 13. If I wanted a hero that young I'd be reading Power Pack. Oh, and apparently his Spider-powers include a camouflage that also somehow affects his clothes. No doubt they'll be giving him organic webs, because they can't come up with a reason to give him mechanical ones. I don't have high hopes for the series, in storyline or in popularity. Everyone's going to get it because it's got the new Spider-Man(!) but once people actually read the damn thing and the quality doesn't match up at all to the old Ultimate Spider-Man, they'll stop buying and Marvel won't know what to do.

I feel a bit betrayed by Bendis, but honestly I'd wager he was forced to write this by the higher ups, namely Quesada, my nemesis. I really hope the whole thing wasn't his idea, because I don't know if I can believe Bendis would do that to me. The art's... not bad, but they kept using the weird newsprint dots for the background when, really, in comics these day, you can just use a solid color and it's fine. That might just be the style of the colorist, and not the penciler, but I'm not sure.

Also: note, this and the rest of the Ultimate comics are coming out with new #1's at the same time all the new DC reboots are coming out. I would say, "Well played, Marvel." except it's really not all that well played. Just kinda copycat. At any rate, that was your new #1, and this is the W Defender.
Posted by Walter Sojda at 11:13 AM