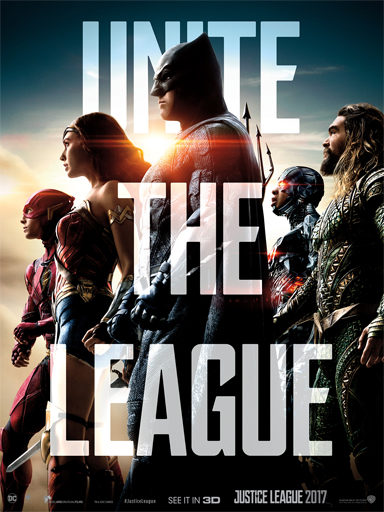 Finally! The culmination of all those films DC's been putting out, now they finally meet in the event everyone's been waiting for! For the first time since each one of their solo films, these titans will-- wait, how many set-up movies were before this? Two? And they were Man of Steel and Batman v Superman? Oh. Guys I don't think they copied Avengers correctly.

So yeah, Justice League is WB/DC's counterpoint to The Avengers, a movie that came out 5 years ago. Where Marvel seemed to meticulously plan out what characters got movies and how they would come to be in Avengers, DC said, "Aw fuck it, just shove 'em all in the last one!" Now technically Avengers is better film, it has a consistent tone and mostly everything makes sense. But honestly, I think I kind of enjoy Justice League more.

Before I get ahead of myself, let's just talk about the plot real quick. It's about Steppenwolf, an alien CGI Man, who has to get some MacGuffins to conquer Earth or something. Batman catches wind of it and has to assemble a bunch of superheroes you're sort of familiar with to stop him. If we go bare-bones, the plot is nothing special. In fact, it's about as boilerplate as it gets. If someone had told me there'd be a more boring villain than Ronan the Accuser, I would've called the police. But here it is, Steppenwolf wins the prize. I'm not even sure there was a person under there, I think they just stuck him in there and had a guy phone in some cliche evil talk.

But that's not why I enjoyed it. I think I probably enjoyed it for the wrong reasons. It has a sort of Spider-Man 3 feel to it, where if you want to take it completely seriously, the jarring shifts in tone will quickly alienate you, but if you just get a little drunk first and stop caring if it's good or not, you can have some fun. And when I say jarring tonal shifts, I mean it. See, nearing the end of production for the film director Zach Snyder left, due to family reasons, so he brought in Joss Whedon to helm reshoots and edit the film. And if there's any two directors whose work wouldn't mesh well together in one movie, it's Snyder and Whedon.

Let me give you an example. In one scene, we have a flashback to a climactic showdown with Steppenwolf far in Earth's past. Giant armies of Amazons, Atlanteans, and humans attack. It's shot like 300, it's got slowdown and shadow-heavy lighting. In another, The Flash and Cyborg dig up Clark Kent's grave and crack jokes about it.

So basically what I'm saying is, if the development of this film was simple and easy, it probably would've just turned out another boring broodfest like Batman v Superman, but with all the internal turmoil, it ended up something just a little off from the now standard superhero fare. I don't think they wanted to make it this way, but I think that almost makes it better. I think I like how weird this turned out more than I like most movies Marvel's been cranking out. Aquaman alone is odd enough to justify watching this thing.

If you're looking for a generally competent superhero flick, this probably won't appease you. But if you can take a step back and realize this whole DC Universe thing is probably going to crash and burn no matter what they do, you can probably enjoy seeing it start to go up in flames.
Posted by Walter Sojda at 1:20 PM