I just saw Annihilation, and I wish I had seen it sooner. 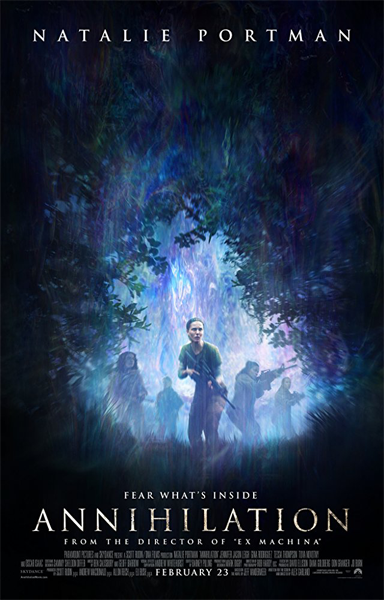 Based on a book of the same name by Jeff VanderMeer, which I didn't read, Annihilation is a sci-fi/horror film that reminds me very much of H.P. Lovecraft. The basic plot reads as this: A meteor falls out of space in what I think is Florida, which then creates some shimmering field around itself (called the Shimmer) that is slowly expanding. Anyone sent in never comes out, save for one man, Natalie Portman's husband, Oscar Isaac. Natalie Portman's character, Lena, after ending up at the facility tasked with researching the Shimmer, decides to join with the researching team about to go on an expedition. They enter the Shimmer, but only Lena returns.

With themes, the film shared a lot in common with my favorite Lovecraft story, The Colour Out of Space. A meteor begins a strange transformation in the landscape and creatures, and is essentially incomprehensible. If you had told me this was an adaptation of that story instead of Jeff VanderMeer's, I would have believed you.

It starts slow, but the buildup just raises the tension until the real action starts. And by "action," I don't mean fighty Avengers action, I mean suspenseful, nightmarish, body-horror type action. The effects are great, you can tell they used practical effects when they could, and the CGI was something they spent a lot of time on. One effect near the very end of the film mesmerized me.

The film is overall surreal and terrifying. Even when there's not a big monster doing something, things just seem off enough to grab your attention. It takes its time, doesn't try to rush any reveals, and you don't learn everything about everyone right off the bat. To avoid spoilers I won't say much more, but the ending was more nightmarish and uncanny than anything before. I had a hard time figuring out exactly what was happening, and I loved it. It was stunningly creative in its design and concepts, it's definitely one where I want to listen to the director's commentary when I have the chance.

One minor point that I'm surprised hasn't gained any traction, but all the main characters are women in scientific fields. It's the sort of thing they tried to market Ghostbusters 2016 with, but in this film it's not just a cash-grab move. I wasn't even aware of the cast before going in, but you would think, especially given the tone of the most recent Oscars, that somebody would be making a big deal out of it. I'm just sort of bewildered that this isn't getting any attention, I thought this was what everyone wanted...?

Sadly, looks like the film ain't doing too well in the box office, which is a real shame. I guess this is the kind of thing that happens when you're out the week after Black Panther, the most popular movie ever made. If you're a fan of the surreal, sci-fi, or want to see something you haven't before, I highly recommend Annihilation, as long as it's still in theaters by the time you read this. Or if it's on Netflix, I guess, which is the only venue it's being released in outside of the US.
Posted by Walter Sojda at 10:54 AM