Books From The Bin: Splinter of the Mind's Eye

Remember back in the before-times, when the world was young, hope was in the air, and we had a Star Wars Expanded Universe? Ah, those were the days, when we didn't have to wait for Disney Plus to trickle out exactly one piece of ancillary content every year or so, because tons of writers and artists were working on their own takes of the outer limits and future of Star Wars. But that time is over now, ever since our ol' Expanded U got flushed down the gutter after its' acquisition by the Big Mouse. I'm sure we all have something we look back on fondly if we were interested in the imprint, like Young Jedi Knights, or maybe The Old Republic series. But have you ever heard of the first Expanded Universe book? I thought not. It's not a story the Jedi would tell you.


Books From the Bin: Splinter of the Mind's Eye by Alan Dean Foster 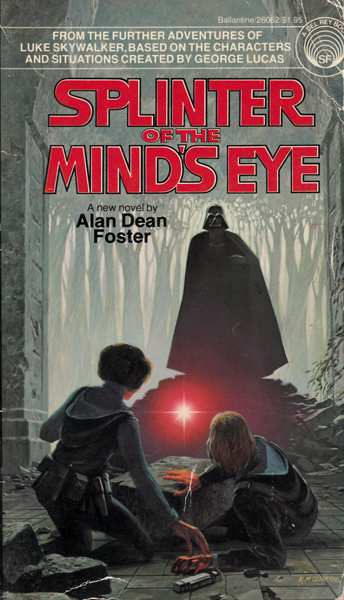 Imagine, if you will, living in a world in which there is only one Star Wars movie, and it's just called Star Wars. Weird, right? Imagine further, that you were just as desperate for more tales of the spaceship farmboy and his cinnamon bun bonny fighting the black toaster guy. I'll tell you what, if you were alive back in 1979, this would be the book for you!

STRANDED ON A JUNGLE PLANET, LUKE SKYWALKER AND PRINCESS LEIA FOUND THEMSELVES DESPERATELY RACING IMPERIAL STORMTROOPERS TO CLAIM A GEM THAT HAD MYSTERIOUS POWERS OVER
THE FORCE

Luke Skywalker expected trouble when he volunteered to follow Princess Leia on her mission to Circarpous to enlist their Rebel underground in the battle against the Empire. But the farm boy from Tatooine hadn't counted on an unscheduled landing in the swamplands of Mimban...hadn't counted on any of the things they would find on that strange planet.

Hidden on this planet was the Kaiburr crystal, a mysterious gem that would give the one who possessed it such powers over the Force that he would be alll but invincible. In the wrong hands, the crystal could be deadly. So Luke had to find this treasure and find it fast.

Accomopanied by Artoo Deetoo and See Threepio—his two faithful droids—Luke and the Princess set out for the Temple of Pomojema...and a confrontation deep beneath the surface of an alien world with the most fearsome villain in the galaxy!


Okay, now it's probably the most inconsequential thing in that blurb, but I feel like I need to mention how the author spelled the names of the droids. It's not just in the blurb, every time these characters are mentioned in the narrative, they're spelled all phonetically like that. Which is odd, because they're both clearly just designation numbers and not names because they are robots. If you wanna have Luke call out, "Artoo!" when talking to R2-D2, that's fine, it's dialogue, it makes sense to have little idiosyncrasies like that, but it's every time, and it's weird.

Now that last segment may have felt like it was completely superfluous in regard to the overall quality of this book, but the thing is, most of the book has details that feel like that. Because Star Wars wasn't as reiterated and codified as extensively as today, Alan Dean Foster had to just make up a bunch of this. Like, yeah, sure, Leia, who grew up on a lush fertile blue planet full of lakes and rivers, is afraid of water, while Luke, who spent his whole life on a desert planet and has likely never seen a large body of water, is not.

I don't know if I even need to go over the plot; that blurb went into so much detail a recap seems redundant. Let's be honest, we all know who "the most fearsome villain in the galaxy" is. It ain't Boba Fett, because he didn't exist yet. It's Vader, though his dialogue gives me the same vibes as "Artoo Deetoo." He's a lot more of a mustache-twirler, and Lucas hadn't decided Vader was Luke's dad yet, so with the knowledge of the sequels in mind, his character makes even less sense. Oh, and he calls Obi-Wan "Ben Kenobi."

For the most part,this book's only interesting as a curiosity. I can imagine being in a world where there is but one Star Wars movie and you need MORE. But nowadays, where we're inundated with every War that could happen in Stars, it's at most your standard sci-fi novel with details that seem at odds with Star Wars Canon. Though not to say everything in the book was thrown out, the crystal mentioned in the blurb turns out to be a Kaiburr Crystal, and while it doesn't seem to match up exactly with our current conception of a lightsaber crystal, it at least seems to have passed down the name, if not the concept of a force crystal.

In an odd twist of fate, this seems to have suffered the same fate as the Expanded Universe works that would follow, only much quicker. The things that happen in this book make exactly zero impact on the movies. It was made irrelevant as soon as a bigger piece of media followed. I mean, hell, I like to think I know a bit about the Star Wars, but I never heard of it. Alan Dean Foster, as it turns out, first wrote the novelization for Star Wars (which I also found in a bin) and between his more numerous original works, wrote quite a few movie novelizations, including more recently The Force Awakens.

With things being the way they are and corporate conglomerates owning all popular media IPs with strict control of everything released within them, Splinter of the Mind's Eye hits a little different. It contradicts canon, it's got weird spelling conventions, it takes place entirely on a swamp planet with a weird kinda force-user lady, and it doesn't even have Han Solo. But it's this, "eh, fuck it" attitude that gives the book its charm; it was written before anyone could possibly have conceived of a "Wookieepedia" and the only person who had real financial stakes in these characters was George Lucas. It was the Wild West, and sometimes, even though it's a but off-putting, it's nice to go back to before everything became a parking lot.


Update: The day after publishing this, the Science Fiction and Fantasy Writers of America posted an open letter by Alan Dean Foster to Disney. Disney has not been honoring the contracts it bought from Lucasfilm with its' acquisition of Star Wars. Splinter of the Mind's Eye is just one of the books that Foster has not been getting royalties from. I don't normally have a Call to Action here, but Disney's being a real asshole here, and if there's one thing I know, it's that it's fun to pester multinational corporations on twitter. So, if you wanna tilt at a shitty windmill, there's the hashtag #DisneyMustPay and maybe Foster can get the money he should be for his books.
Posted by Walter Sojda at 5:25 PM