Spider-Man No Way Home is the final film in the (presumably first) MCU Spider-Man trilogy. As I've said before, I'm not a fan of MCU Spider-Man. And there's a lot to dislike. To be honest, I kind of expected to hate this movie, especially since every one else loved it and I'm a hopeless contrarian. But then something happened.

A strange warmth filled my heart. 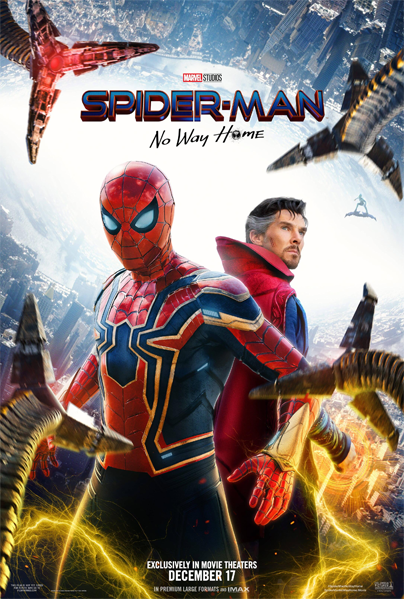 So turns out I'm a fucking rube. I can't help it! You put multiple Spider-Mans on a screen and I giggle and clap like a baby. Andrew and Tobey together on screen, in a lab, swinging around, it was great. It was mostly just fanservice, but goddamn if I wasn't serviced.

But, you know, that wasn't the whole movie.

Let's be real with ourselves, the rest of the movie was still MCU Spider-Man. You know, the one that didn't even seem like he wanted to be Spider-Man for most of this trilogy. The one with the extended cast that did little but annoy me. With Blondie Brant and Flashcard Thompson. The first part of the movie took a long time without a lot of meat on the bones. It's weird that legal troubles came up and very quickly got swept under the rug. Like, Mysterio's whole case seemed pretty tight, but Matt Murdock shows up and everything is fine.

Remember Back In Black? It was the comic story where Aunt May is shot after Peter revealed his identity in Civil War. And then he goes on to commit a bunch of crimes to track down the man responsible and try to keep his aunt alive. It's why Spider-Man's identity becoming public was such a big deal, why you knew some bad shit would go down once it did. But MCU Spider-Man just has to crash at Happy Hogan's place and gets sad about college. Instead Alex Jones-- Er, Jameson (who only now exists) gets people mad enough to throw rocks through Peters window. Even though Spider-Man only did one thing after five years and it was the Mysterio thing which didn't even matter legally. It's just weird that there's no real bite to this.

I mean, think about how that three movies in, MCU Spider-Man doesn't have any villains that would come after him. Not even like, a mob boss or some shit. What the hell did he even do? Did Spider-Man fight any crime that wasn't the Vulture? For the first two movies he had Iron Man villains and in this one he has to borrow villains from the Spider-Man movies that were actually good. Not to say that situation actually makes sense.

So the magic spell is supposed to summon people who knew Peter Parker is Spider-Man. But like, why is Electro there? He don't know who Spider-Man is. Venom had more reason to be there. But then you wouldn't have a villain from every movie, and that's what's more important.

I did like that, in a departure from the other two films, Peter actively went against the adult in this situation. In Homecoming he just wanted recognition from Iron Dad, and in Far From Home it was all under the direction of Nick Fury, but he actually fought Dr. Strange so he could try to save lives. And I like the idea that three Spider-Mans worked together to cure the villains. (like andrew did in TASM but sure let them die for the rest I guess it don't matter) And Tobey being able to whip up a Goblin Fixing Serum makes sense, since his best friend died because of it, more or less.

Of course, the Lizard and Sandman seemed like they didn't work very well as part of this ensemble. What point in time was Sandman taken from? Why was he so pissed off so often? At some point Spider-Man caught aggro and couldn't shake it. And with Lizard, what was his plan? He stayed in the van while Peter and Osborn had their little science class, and you think he has some master plan when he says, "It begins." But all he does is sort of run away once Green Goblin is wrecking shit up. He didn't even turn anyone into a lizard. C'mon, he just wants the whole world to be lizards. Let him have one. And I guess they couldn't get their actors, so they were just CGI the whole time, til their cures came up and then they got Bully Maguire'd in. Though honestly that was a separate concern from how they were written, but it didn't help.

Electro really came out on top here. He wasn't blue! Plus a design I like more, though if I had my way he would've had the lightning bolts around his head the whole time. Plus he talked with Andrew and that made me happy. Green Goblin was pretty great too. Dafoe's still got it baby! It's weird that they just fixed him at the end. Especially after May stuck him with some kinda green fluid earlier in the film. What did that do? It was like a Chekhov's gun that fell behind a couch and everyone forgot about.

Fixing the villains doesn't really make sense if you try to place them back in the movies. Because, like, the same shit still happens, right? Did Osborn just pop back in right before the glider stabbed him? Am I supposed to assume this is why he said that deadpan, "Oh." Was that a sane Osborn getting stabbed? How would the Lizard getting cured before it happens in TASM fit anywhere? Just don't think about it I guess.

I am glad they didn't make any Aunt May Is Hot jokes this time. Though she did die. And they shoehorned in stuff from the video game, like FEAST and her gravestone quote, which she never actually said in this film series. Why was it May who gave Peter the Great Responsibility speech? I remember when Homecoming came out, all the fans of that movie said Peter's "If bad happen and I not help, then bad my fault" line was supposed to be that line, as if he already learned that lesson. But apparently not, and he had to learn it now.

This movie kinda disassembles a lot of defenses people had towards MCU Spider-Man, which is odd to see. People said we didn't need to see Holland's origin, because we had seen it before in other incarnations, but now this whole trilogy was his origin. People said he didn't need an Uncle Ben, because Stark was his Uncle Ben, but no, turns out it's Aunt May now. Fans disagreed with the criticism that Peter was too reliant on Stark technology, but now he's completely disconnected with it and they praise that. "Peter is poor!" they said, despite much evidence to the contrary, but now we see what it looks like when he doesn't have any money and it ain't what we've seen before in this trilogy.

How about that ending. Peter Parker erases himself from... memory? The world? The bounds are confusing and unclear. So if it were just memory, yeah his friends wouldn't remember him, but anyone could look up the Daily Bugle archive on youtube and see the hours of coverage about Peter Parker, so we have to assume its more than that. Was it all physical media? So there would be no Daily Bugle coverage or that shrine in the high school, but then Peter does not legally exist. He would have no birth certificate, no job history. How did he get an apartment? Could he get deported? No wait, he's white. He's fine. I guess he has to get his GED, but he's a fucking ghost. How does this work? Don't think about it.

You run into these logistical nightmares with any large-scale retcon like this. And it's worth noting that this is the first such event in the Marvel Cinematic Universe. I predicted such a thing in my 2015 article, Making Movies Into Comics though really it wasn't that hard to surmise. This has officially been branded as a three-film origin story for MCU Spider-Man, but I think that's a misleading assumption. They've relaunched the series with a new numbering, the next film will be a #1 again. And in comics this can lead to an initial increase in sales, but eventually they always go back to the old numbering. Is this merely the beginning? Time travel and magic are viable possibilities for further retcons, which are gonna be pretty necessary as public interest wanes and actors get sick of playing the same character forever. We have reached another step in movies becoming as alienating as comics.

I think its worth noting just how derivative this film is from other recent Spider-Man media. Aunt May, with her job and epitaph and the ending shot with Peter swinging out after looking at the police scanner on his phone are straight from Insomniac Spider-Man. I wouldn't be surprised if they copy that incarnation real closely in the future. Then the whole plot of this film, which is cribbed straight from Into the Spider-Verse, an origin for Miles Morales, and this is touted as an origin for Peter Parker. And the borrowed villains from the Spider-Man films I genuinely enjoy. I worry future films might a similar hodgepodge of adaptations of adaptations. I doubt the people involved have real original ideas here.

So I enjoyed myself, but almost entirely because Andrew Garfield and Tobey Maguire were together in Spider-Man suits and they webswung and I have a simple mind. Normally I would be angry that they got rid of the entirety of Spider-Man's extended cast, easily the best of any comic character, but with these versions I'm actually pretty okay with that. Please, anything to keep me from ever seeing Flashcard Thompson again. I've seen a lot of takes that this movie invalidates any of the Iron Boy Jr. criticism by fixing all of that. But that remains to be seen. Peter alone, poor, in a shitty apartment and a better suit all point to the possibility of a better future film, but does not guarantee it. It's like The Force Awakens, where how good this film could be hinges entirely on the next one. And they could very easily fuck it up. It's the easiest thing in the world, two whole franchises before this one failed. It's more than likely Peter will make MJ and Ned remember who he is in the next movie, and who knows what else would be undone?

I'll watch the next one, which means nothing because I have to watch every Spider-Man film because I have a dangerous obsession. It could actually be better, even though all of reality got fucky. Really gotta tiptoe around how little this makes sense for the next movie to be pure Spider-Man and not just exposition around the nature of Strange's magic spell. Maybe he'll actually fight a crime!

But we all know there's only one thing that could redeem all of this, make me sing the praises of this studio from the tallest hill. 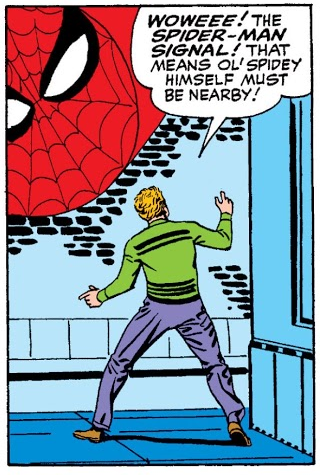 DO IT YOU COWARDS
Posted by Walter Sojda at 3:47 PM