I'm fuckin' jazzed, folks. Yeah, we knew it was gonna happen but seeing actual footage makes it more real, more than even just believing in it really hard would do. Wait, what am I talking about? The new Spider-Verse trailer, you nimrod. Geez, it's almost like you don't obsessively follow every Spider-Man related development with a desperate sad passion unfit for a human being of your age.

Well anyway this is that.


Not a whole lot there, but there's some! The designs for Miles and Gwen have changed somewhat, in-costume and out. They definitely look older, both with longer hair, and Gwen still has the undercut she had in most of Spider-Verse 1. I like the hair! Then there's costume design, where Gwen hasn't seen much of an overhaul, the most noticeable difference being her gloves now have the webbing pattern whereas before they were pure white. Miles has a pretty substantial change, with the red shoulders gone in lieu of a red band going down each his sides, going up the interior of his arms and outside his legs, each connecting the with little red patches on his hands and feet. The spider insignia looks a little cleaned up, but still appears to be spraypainted on, which I like.

One big hope for this movie is that they add Mayday Parker, Spider-Girl from the MC2 Universe that was running for a while. It would fit with Peter B's whole kids dilemma leading to his estrangement from Mary Jane, but seeing as how he figured out he wanted kids and ostensibly got back together with MJ in the end, he could very likely have had a daughter who inherited spider powers. It's either her or Spiderling from Renew Your Vows, the miniseries about what if MJ and Peter had a different kid and they all fought crime, which I now realize I haven't read for some reason.

And, before I forget, SPIDER-MAN 2099!! MIGUEL O'HARA IS IN THE HOOOUUUUSE!

I'm real happy they kept him in after the little cameo in the stinger of Spider-Verse 1, I love 2099 Nueva York, I love the costume, and I love the way the swear word of the future is the word "shock". I love Into the Spider-Verse with every ounce of my empty withered heart, and this being a definite two-part sequel, I have enough reason not to lose my mind eating pizza for a while.

Coincidentally, I just finished Miles Morales for the PS4 (I am biding my time for the Spider-Man PS5 to come out I know it will I just have to be patient) and, listen, sometimes I just gotta quarantine my Spider-Man thoughts into one post so the rest of them can be taken up with existential crises involving pizza.

Anyway, good game! Short, but that was pretty much the deal going in. I platinum'd it in a fraction of the time Spider-Man 1 took me, but more Spider-Man content is all I need to keep going. I'm glad I didn't purchase a PS5 to play this, considering how much effort it would take to get one and that I only really want Demon's Souls otherwise. I don't need no ray-tracing! I'll take my huffing, chugging PS4 that forgets to load textures on a cat. 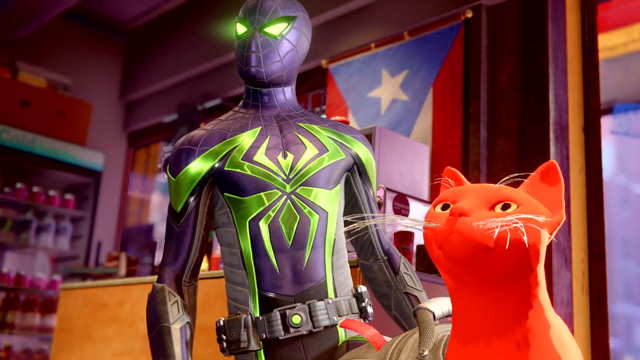 Playing through really made me think about what I want from Spider-Man 2, and I can't bring myself to make a whole article for a stupid list and I want it out of my head.

I want to be able to assign a suite of mods to a suit, ideally 2 or 3 loadouts. I figure most people already switch out all their suit mods when they switch from stealth to combat, or if they're fighting street thugs vs. tech enemies. All this would just make it quicker and easier. I'm surprised they didn't add this in Miles Morales, but they have another chance with the next game.

I don't care if it's local or network co-op, I just want to play with a friend who is also Spider-Man and we both swing and fight crime and have a dang ol' time.

In Spider-Man 1, there was like 6 different tokens you could collect by doing stuff around the city, and remembering what upgrade needed what token and where to get them became a chore. Miles Morales had 2, which maybe was too few. I think 3 or 4 would be a good amount so you're not overburdened with either a single type of token or scrambling trying to find the one type you're missing to make webs better.

In Miles Morales, all your crime data came from the Friendly Neighborhood app, so users reported a crime which you would then fight. I like this a lot more than Spider-Man 1 where Spider-Man fixed police surveillance towers, and also sorta hacked them, and that's where you got crime reports. Spider-Man is best if he has an at-best ambivalent relationship with the police, where they pretty much think he's a criminal as well. They shouldn't be too cozy.

I love this stupid villain. He's no frills, he rides around in a giant wheel with arms and calls himself "Big Wheel". I want a big setpiece chase through Manhattan trying to stop a ferris wheel from blowing up a bank or something. Either him or The Spot.

6. Bring back the old face

You know the drill. Please, do it for me. You guys know it exists! I saw it! LET ME SHINE A STUPID LIGHT ON PEOPLE FROM A ROOFTOP! PLEASE I AM AT YOUR MERCY! 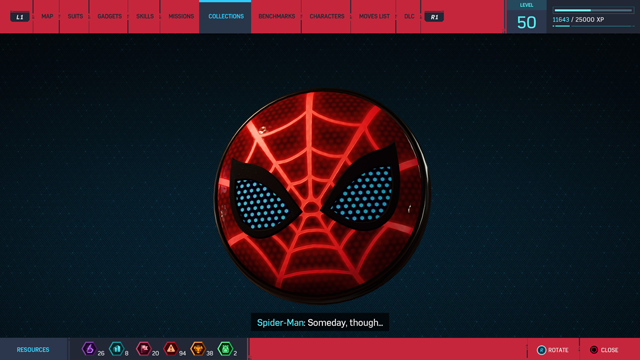