Barbie Girl in a Pointless World

Does life have a meaning? A sophomoric question to some, but the only important question to others. In those for whom the answer is simple, there is some sort of faith, an assurance deep inside of them that there is a reason for each travail and setback. They intrinsically have the will to persist, and no discussion need be brokered.

The other half of that equation is where things become more complicated. When life's meaning is an open question, it demands an answer. One must either find an external reason for being, or accept that there is none, and persist regardless. Philosophers have debated this point for centuries, among their ranks being Friedrick Nietzsche, Albert Camus, Viktor Frankl, and... Barbie? 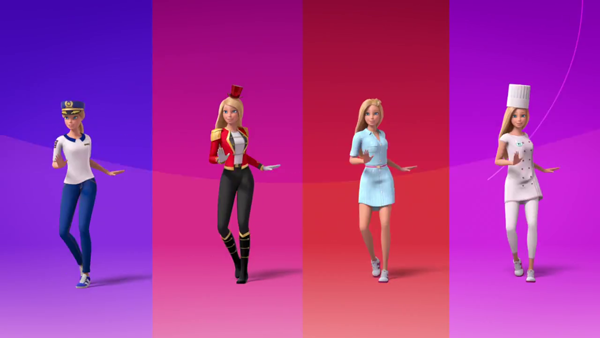 In the dark of night, in the throes of a deep depression, I thought, as I often do, about Barbie. What drives this woman? She takes on so many guises, can accomplish any task, but why? What is her purpose? The query stuck in my mind, overwhelming more important things like signing up for health insurance or buying food. I have tried to know. I must know.

In an earlier article, I claimed that Barbie perfectly embodied the Ubermensch. I feel as if this holds enough explanation within itself to preclude any further discussion. No, we will find our explanation with French philosopher, Albert Camus. In his text, The Myth of Sisyphus, Camus describes the condition of life that makes it unbearable. It is the random, meaningless nature of the events that surround us. You live for no reason, you will die for no reason. You have a unique consciousness to experience the world but it has no purpose for anything else, and will fizzle out one day with as little import as it began. It is the Absurd. He envisioned our lives comparable to that of Sisyphus, a figure of Greek legend, who, punished by the gods, was tasked with pushing a gigantic boulder to the crest of a hill. But no sooner did he accomplish this than the boulder rolled back to the foot of the mountain, where his quest began anew. The trials and tribulations we face are no more meaningful than putting a rock on top of a hill where it will not stay.

But what if you could choose to find joy in that act? Camus proposed three methods with which one could cope with the Absurd. The first is the Don Juan. Experience as much love and romance as one could, at every moment. The newness of love would refresh itself each time, holding the utter pointlessness of it at bay. The second is that of the actor. With each new identity adopted, one struggles against the banal face of reality, each one a new boulder for Sisyphus to carry. The third is of the conqueror, one who acts without hesitation, succeeding in every horizon that is encountered. Simply placing a mark on history is enough to justify continued existence.

So now we must ask, what does this have to do with Barbie? Well, she fulfills two of the three methods Camus proposed for dealing with a meaningless existence. She has forgone the Don Juan route, which we will address later, but the remaining two fit her to a T. First, the actor. In the majority of Barbie movies, it is not specifically Barbie that we follow. Rather, she is cast in the role of another character altogether. Barbie in Princess Power is not about Barbie. It is about Kara, a princess of Windemere who is played by Barbie. The same is true of Barbie Star Light Adventure, where though the character is named Barbie, it has nothing to do with Barbie herself, she is merely another role that Barbie plays. In that way, Barbie transcends the limits of reality to inhabit the personas of many different iterations of herself. She does not live in a world where she is a super spy, but by acting in these films, she can broaden her horizons, if only in fiction.

The most relevant to Barbie herself is, surprisingly, the conqueror. Though not a conqueror of territory or resources, what else could you call the unending succession of professions Barbie has mastered over her lifetime? It's not as if she has a personal connection to each of these jobs, as she quickly moves onto another after mastering it. People spend half of their lives training to be a doctor, with the expectation that the other half will be spent living in that role. Barbie gave it up to be a racecar driver or something. What the job is does not matter, what matters is that there is always more, always another summit to climb. She can continue to stay occupied, never really having to face the Absurd.

Next you may wonder, could it be that Barbie does in fact create meaning in her life? In a meaningless world, how could one do so? For that we must look to Viktor Frankl, a holocaust survivor and creator of logotherapy, the idea that to survive difficult times, one must latch onto their own purpose. He formed these ideas while being held in a concentration camp, and tried to figure out why some people survived the abhorrent conditions and others did not. He realized his findings were relevant to people across the world, whether dealing with inhumane conditions, or the suffering inherent to life. Suffering, he found, acts like a gas, where no matter its mass, it expands to fill the human heart.

In Frankl's book, Man's Search For Meaning, he outlines three different ways one can create a sense of meaning in one's life: The first is to create a great work, as in Frankl's case was a book on the very subject I am writing about, which motivated him onward when conditions pushed him to the brink. The second is a great relationship or experience, to truly love another person and create a unique bond that surpasses all tribulations. The third is to simply bear great suffering nobly, to be in the midst of agony but hold oneself steadfast, and act with grace in the worst of situations. We can dismiss the third condition outright, with regard to Barbie. Suffering seems all but banished from her life. She's a Barbie girl, in a Barbie World. Her every physical need is met, and she has the time, energy, and motivation to pursue whatever career suits her fancy. So this can be disposed with.

What of the first method? One may assume that Barbie's various occupational forays would fit this condition, but I disagree. Each is surmounted and discarded, one after the other. The content of each job is irrelevant, otherwise why not focus her efforts to only a couple? And the quantity itself is not a goal, as it's difficult to find an accurate figure for her careers, and in no piece of media is she really all that motivated to collect more before her time is up. The jobs she has taken are so numerous so as to be functionally meaningless, like trying to bring value to a single footstep on an aimless walk.

The second option seems closest to correct. The mention of relationship brings to mind Barbie's constant paramour, Ken Carson. Through most media, Ken is there at Barbie's side, usually seen as quite a catch himself. One may even believe this relationship is important enough to create meaning for Barbie. But let us not fall prey to romantic delusions. Barbie is a polymath, constantly on the move, ever pushing forward, ever changing. What is Ken? At best, he is The Boyfriend. An accessory. What could a mere mortal hope to provide to one such as Barbie? His assistance is taken in jest, the way one might praise the art of a child. There is nothing he can do that Barbie could not surpass. Barbie broke up with Ken and the two were not together for seven years, but that changed nothing for Barbie. She loves him in the manner of a pet, a less intelligent lifeform that can provide intermittent amusement, but nothing truly substantial. Barbie stands alone.

So we see, Barbie does not have the kind of life to create meaning for herself. In each of the ways Frankl described, she acts contrary. She holds no faith, expounds no philosophy, but we can tell by her actions what she believes. There is no meaning for Barbie. What she enacts is the endless treadmill against boredom, against the desolate truths that underpin her existence. She has no reason to persist, none more than your office lamp or toaster, but unlike those objects, she has a choice. Yet persist she does. Despite the desperate banality at the core of her life, Barbie surpasses all of us.