Okay then, I finally got the last part of the American Son saga, so now for the review you've all been waiting for. 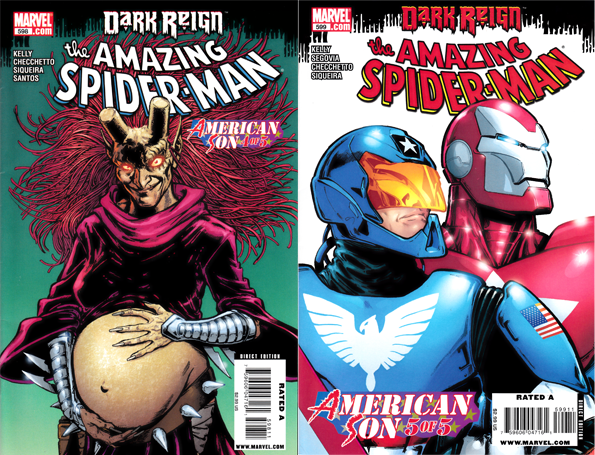 Now then, last time, we were left with the tantalizing notion that Spider-Man may have gotten shot and killed in response to his extremely stupid behavior.

This issue starts with Harry and Norman having a heart-to-heart, Norman telling his son that he's proud of him, while he's covered in blood. Norman reveals to Harry his plans for the American Son project, and when Harry asks if Spider-Man is going to live, Norman gives a negatory.

We next cut to Spider-Man, strapped to a wall, blood on his face, and a laser shooting his head. See, the Venom mask he had was created by Reed Richards, who took precautions in case Spider-Man's completely idiotic plan somehow found its way toward trouble. Osborn, content to keep his hands from getting dirty, promises a bonus to Hawkeye if he can get Spider-Man to reveal his identity, or get his mask off.

We then cut to a pretty useless interlude where we follow Norah as she flirts her way to restricted security levels. 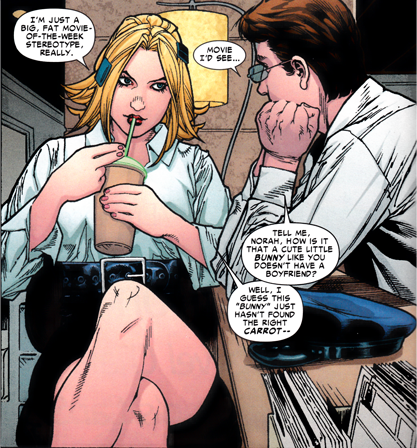 Anyway, then we go back to Spider-Man, as Hawkeye shows how he'd rather be known as Bullseye for no understandable reason. 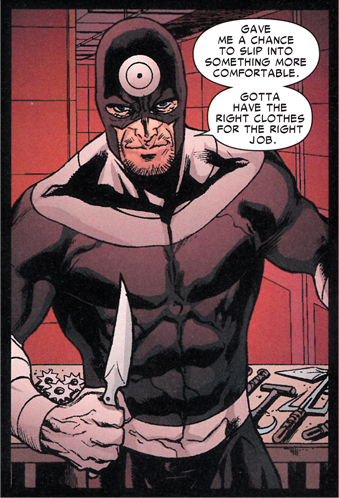 I mean, in the Dark Hawkeye limited series, people dressed as Bullseye are currently trying to drive him insane. So, you know, by all means he shouldn't have the inclination to dress in his former persona. Just another example of an author not bothering to care what else is going on in the universe, or about any changes to character.

After that pointless costume change, Norman shows Harry the armor and explains to him the treatment he will be receiving won't be drugs, per se, but more of a compound, like the super soldier serum. I mean, it's not like every attempt to replicate that has ended in failure or anything.

Anyway, while Spider-Man is still in incredible pain, Norman reveals he can break down the compound in his mask, and while he does so, he proceeds to tell Spider-Man that Harry sold him out for a woman. Obviously he's never heard of "bros before hos." Harry, in the meantime, gets to Lily, and tries to give her the cure to the Goblin serum. She freaks out, and knocks Harry down. Osborn, in turn, drops some significant foreshadowing in two words. 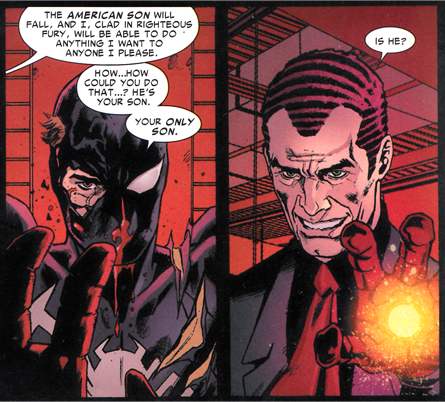 It then shows Lily, turned into a new and improved Menace, who for some reason doesn't look pregnant at all anymore. Apparently the baby changes or something so she can have a flat stomach again. I don't know. Anyway, the foreshadowing Osborn dropped before is quickly uncovered before anyone can speculate on it.

Spider-Man finally breaks free from his little prison, and proceeds to beat the shit out of Norman and Bullseye. Harry runs away from the new Menace, who laments her old boyfriends ball-growing. 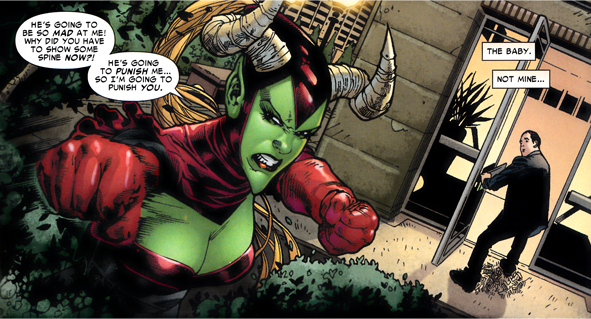 Norman gets the upper hand on Spidey again, and is about to rip off his almost entirely destroyed mask when Harry bursts in, with the American son suit assembling itself on him.

When the next issue begins, the bleeding near unconscious Spider-Man has a flashback amid Harry and Norman having a supersuit fight. I actually like this flashback, because it, at least, is well written, and it's from the time when Norman liked Peter more than Harry, so Harry got in a fight at a frat party to take out the anger. It's sentimental, but I liked it. Anyway, they fight, and there's a nice splash page. 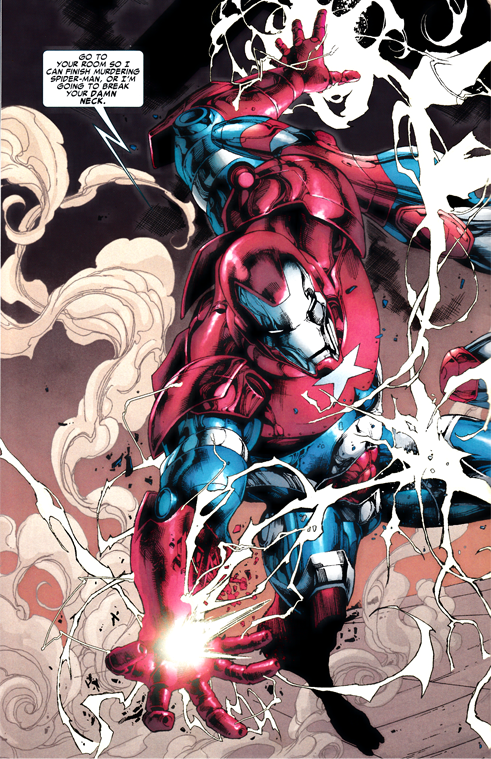 So they fight, and the dialogue pretty much amounts to "Daddy! You used me!" "You know what? GO TO YOUR ROOM." Until Harry decides to bring it all out in the open.

After smashing Norman through the wall of the skyscraper, Harry goes to a shadowed, unmasked Spider-Man, and Harry tells him that he hasn't seen his identity, and to stay out of the fight. As the fight is taken outside, Norman tells Harry he couldn't make Harry into the son he wanted, so another opportunity presented itself. 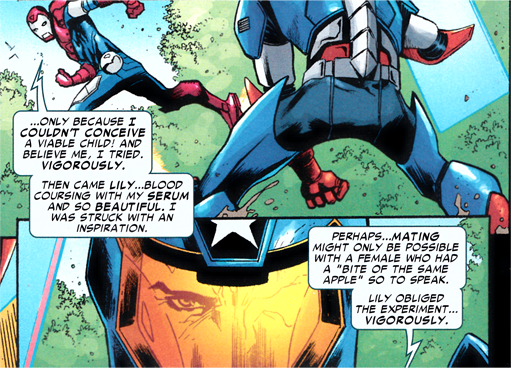 Norman then gains the upper hand, and looks like he's about to win, so guess who comes to save the day!

There's a battle royale between Norman, Menace, Harry, and Spider-Man, until Harry stands triumphant. Harry is about to kill him, until Spider-Man gives him the old "If you kill him you will become him" speech, so Harry backs down, takes off the suit, and walks away.

Next Peter is in the hospital, with the explanation that he was hit by a car, and that's why he has a black eye and random other injuries a car could not possibly inflict. Harry, who tells a doctor about the goblin serum, gets an offer for a prescription of Oxycontin, which could foreshadow more drug addiction for him, right after he got sober again. Norah, Peter's whore friend, talks to the editor at the paper while she reviews the footage she got from the Avengers building. Instead of what she wanted, she gets a recording of the friend she stole the keycard from being tortured, then footage of her using it, with a voiceover saying "I never forget the people who meddle in my affairs. NEVER." So she gets too scared to continue her story. The last part of the story has Norman talking to his yet-to-be-born son about how he's going to kick everyone's ass. Then the issue ends.

Okay. Now. These issues. First of all, the "Norman Osborn boned your girlfriend and now she's having a kid" was done before, with Gwen Stacy of all people. I mean, I get the feeling these comics are just a retreading of old stuff, only in a worse way. Of course, saying Norman Osborn knocked up Gwen Stacy wasn't the best thing ever written in the first place. I mean, man, he implied he was impotent before, but he's the opposite! Who hasn't he banged yet? I heard he winked at a girl once, and the next day she was in her third trimester.

Anyway, these two could have been better, Osborn still talked like Frank Miller Batman, but the last issue had some redeeming factors, and it finally ended. I'm probably going to get Amazing Spider-Man 600 since I heard Mary Jane was going to be in it. I bought a new Place Vendome CD, so I'll probably write a review of that in time, for those sick of these reviews. Anyway, until next time, this is the W Defender, signing off!
Posted by Walter Sojda at 9:39 PM