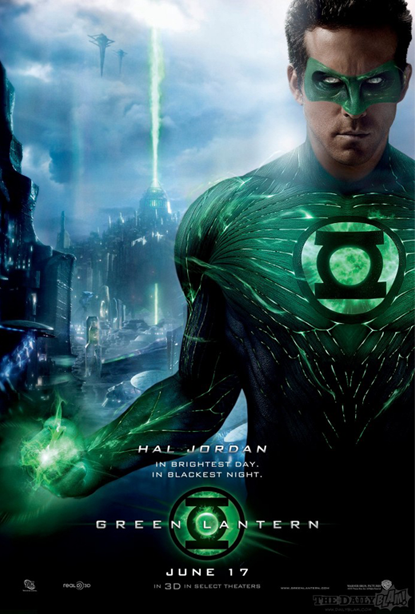 The entire first half of this movie is exposition, wherein we are introduced to the Green Lantern Corps, Hal Jordan, Carol Ferris, Hector Hammond (Hereafter referred to as Dr. Forehead), Hector Hammond's dad, Sinestro, Hal's family that gets a cameo, and some other people I immediately forgot.

The main problem this film had was it couldn't focus at all. It can't decide whether Hector Hammond is a major character, if Hal's character arc matters, if they should focus on the giant space battles or the small stuff on Earth, or a million other things. I honestly couldn't care less when Hal decided to quit the Corps almost immediately after being inducted, because I wanted to care about the Green Lantern Corps  and the giant space thing they were supposed to fight. But rather than care about that, we got to see Hal fly around and try to get laid. A lot of the time, the writing was just sloppy. For example, when Hal is inducted into the Corps, Sinestro feels that Hal cannot replace his old friend Abin Sur. How do they communicate this? Sinestro tells Hal that he can't replace his old friend Abin Sur. When Hal has to stop being scared and overcome his fear? Carol tells him to stop being scared and overcome his fear.

The problem with focus is furthered with the villains, Dr. Forehead and Parallax. Forehead has as little introduction as possible before becoming a villain of sorts, while Parallax is kind of explained in the opening crawl, and a tiny bit more during the 40 minutes of exposition. All the parts with Dr. Forehead seem too diminuitive when compared with the potential giant space battles, but Parallax just seems too much like the big scary monster. Parallax's first line in the movie is to some things he kills, and is as follows: "Are you afraid? Good." Hammond spends 80% of his time either screaming or laying down, while Parallax spends all of his time trying to look scary.

With Hal, they throw in random parts of backstory that hardly matter, like a flashback of his dad exploding in a plane (which is unintentionally hilarious), and one of his relatives mentioning a motorcycle accident he had. His personality is annoying at best. They try to shoehorn in some sort of parallel between Hal and Hammond, but it really doesn't make any sense.

Carol Ferris is Hal's love interest, but any scene with them together is just hackeyed and grating to watch. It is mentioned once or twice that Hammond was in love with her, or something, and it doesn't really go anywhere.

A lot of things don't go anywhere, or are just barely developed, like Sinestro, who should've been an interesting character, and is quite obviously going to be a villain next movie, but he barely has any screentime and his motives make no sense. He makes a yellow ring that uses the power of fear, to fight a being of pure fear. Yeah.

A big problem with the movie was the designs and CGI. As you know, Ryan Reynold's costume was all CGI, and it was glaringly obvious. His little mask and whitened eyes stood out like eyesores every time they were on-screen. They were such bad CGI that they made his face look CGI. His regular, normal face. Abin Sur looks very very familiar.


Parallax, who is supposed to be the abstract concept of fear, is instead Megamind with tentacles.


Dr. Forehead started out as a normal guy, but then his forehead mutated, somehow giving him chin-fat, and he started wheezing for the rest of the movie. I understand that they were trying to make him repulsive, but they went so far that I wanted any scene with him in it to quickly be over, because every time he was on-screen I felt like I needed a shower.

What doesn't make sense is that during the whole movie, it talks about overcoming fear, so you would think that just by overcoming their fear, the Green Lanterns would defeat Parallax. But no, instead Parallax is beaten by being punched into the sun. See, the only thing to fear isn't fear itself, but a giant scary monster. Which you can then kill forever by punching into the sun. Despite the fact that it's made of fear.

The director desperately wanted to show a parallel between Forehead and Hal, by showing Hal trying to figure out how to work the lantern between cuts of Dr. Forehead inexplicably becoming mutated from bits of Parallax he touched. This goes so far as to have, in the middle of a fight scene, a part where Hal and Forehead fall down next to each other (and continue to lie there for a considerable time) and Forehead says, and I quote, "How did we end up so different?" trying to pummel the audience over the head with the symbolism.

As far as the fight scenes went, some of them weren't so bad. The power ring effects weren't bad most of the time, and it was about the only time the obvious CGI was fitting. Of course, the closest he comes to actually fighting is having a little will-battle with Dr. Forehead or when he's drilling through MegaTentacle.

Overall, it was disappointing, disjointed, and stunted. So much went on that had no resolution or conclusion, and what was concluded felt rushed and not well thought out. The effects never looked terribly good, the characters never had any development or many if any likeable moments, and the movie had more exposition than it had resolution. I wouldn't suggest seeing it, unless you must see what they've done to our characters. In Brightest Day, in Blackest Night, this is the W Defender.
Posted by Walter Sojda at 12:52 PM