So guess what I just saw. It's that movie about the guy who flies around, wears a blue suit and punches stuff. Not saving people, but I'll mention that later. It's time for: 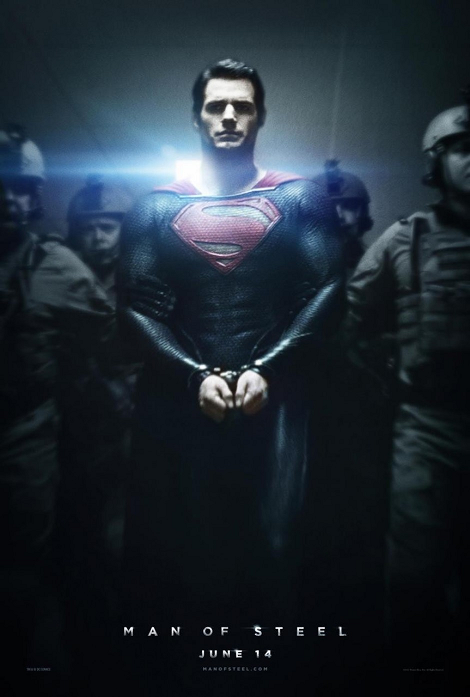 Okay. So. I'm not even quite sure where to begin. So the first part of this movie was an incredibly long opening sequence on Aiur Krypton where it takes far too long for Jor-El to send Kal-El off to Earth, and a bunch of other stuff to happen. That's one big problem with this movie, everything just takes way too friggin' long. I should not be dreading a fight scene in a superhero movie, but by the time I got to the final fight, I was so sick of them. A large portion of the movie is pointless fight scenes that just go on and on. At one point, I asked myself why Superman Kent was fighting two Kryptonians in Smallville. I couldn't come up with a good reason. At one point Kent fights a giant robot that makes scary arms come out of it, and I didn't know why he was taking so long with that either.

The biggest problem with this movie, however, was Superman. Well, the dude they decided to call Superman right at the end but never really earned the name. He saved, maybe, 10 people in this movie. Eight, really, if you count the two people he pretty much killed. Metropolis was leveled and probably thousands of people died. How is that a Superman movie?! At one point, Kent and Lois make out for a bit in the Metropolis ruins, when there are definitely dozens of people trapped in the surrounding rubble, but don't worry that can wait until Kent and Zod fly around and punch each other for the next hour.

The whole tone of the movie wasn't what a Superman movie should ever be. On the surface it was pretty much any other action movie. For a minute I thought they switched the last act with a Transformers movie. Jonathan "Never Save Anybody" Kent was the worst Super-father ever. So in a flashback, Clark saves a busful of children after it falls into a river, and the mother of a kid in it starts asking the Kents questions. Ol' Pa talks to Clark about it, telling him he shouldn't have done that. Clark says, "Should I have just let them die?!" And his dear old Dad, the foundation for Superman's unflinching morals, says, "Maybe..."

Let me say that again, Superman's dad suggested that he let a busful of children die! Then he dies saving a dog in a tornado for no reason. The whole movie makes a point of expressing that saving people's lives is less important than hiding the fact that you're an alien from everyone forever.

Lemme talk about some other characters real quick. The villains were evil-bland. They had suits that looked like a gothy high school student's doodles, with the face masks almost exactly resembling skulls. Zod tried really hard to kill Earth just because, and expected Kal-El to help him because he must be Raditz or something.

Lois Lane was just sort of there, without much of a personality either way. She did some stuff, but it doesn't matter that she did it, it could have been anyone else in her position and it would have come out the same.

There was a bunch of techno-science mumbo-jumbo about Kryptonian DNA and it's in Clark's cells, but that part was just a reason for Zod to want to kill Clark, and I don't really care about it.

I was aghast when
Posted by Walter Sojda at 9:21 PM