Sometimes I think I might be too susceptible to advertising. I usually only think this when it's some weird time of night and I'm driving to a fast food place I just saw a commercial for. Either I'm gullible or I have a problem with self-control. Point is, last night I found myself at Pizza Hut, which I hope is a situation you never find yourself facing. Anyway, it's time for:

Oh God Why Did I Do This To Myself

My aim that night was the Three Cheese Stuffed Crust Pizza from Pizza Hut. If I were a lawyer of any sort, I would have advised them to add a liberal amount of quotation marks to that title. I guess Stuffed could stay. In the kind of hungry furvor you only get after considering the point of your existence, I ordered it with bacon, pepperoni, and mushrooms. I would try to pinpoint which part was a mistake, but if I consider it at all every decision which lead to this was a miscalculation.

You buy a shitty pizza, and you expect grease, I get it. I expected grease. But this was another level. It left a visible sheen on the pizza box. 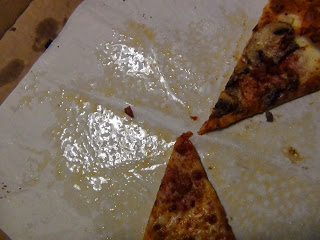 The bacon, I thought, how could I go wrong? Well, it uh, it did. I don't know if it was the cheap bacon, or something wrong with the pizza itself, but a salty taste permeated every bite. Did it have cheese? My eyes said yes, but every other part said, "Maybe."

As for the unstuffed part of the crust. You know, the part under the cheese. The pizza... bread? You know what I mean. It was unremarkable. Kind of rubbery, but nothing you don't expect from something like a Little Caesar's. The "highlight" of this was the Stuffed "Crust". I was surprised to learn, after eating, that they expected me to believe there were three cheeses in this. I'm honestly not sure if there was even one. What I detected, stuffed unwilling into that poorly rolled crust, was some sort of cheese-esque food goo. 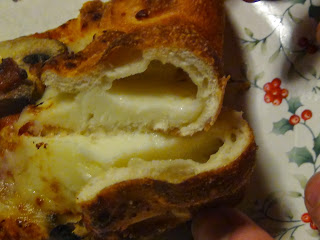 I mean, you could tell it was trying to be cheese. It did its best. They did something to the crust itself that made it taste sweet. Or perhaps after making it through the cheesy part, the sweet taste was my tongue trying to kill itself.

Now, we all know the true test of pizza is not how it is right out of the box, but after a night in the fridge. So, for you, I saved a piece. How was it? I didn't think it could get much worse, but there it was. Whereas previously it was but a container for grease, it became an active receptacle, desperately holding onto every last drop. The plate that held it was free of grease, but my hands were granted the privilege of sharing in this horrible resource. The stuffed portion of the crust became not unlike the floor of a tennis court. Only a marginal improvement over the original.

All in all, I would say this is a poor excuse for a pizza. I can't say I had too fun of a time trying to stuff this in my gaping maw. Luckily, it did put the giant stain on the front of my wifebeater that I was missing. It was salty, greasy, and I think I have trust issues now. Would I buy it again? No. Maybe. Probably.

Yeah, okay, I totally would.
Posted by Walter Sojda at 5:10 PM