I know I'm pretty negative a lot of the time here, "this comic is bad," "this movie made me sad," and whatnot. This time, I'm just going to talk about something I probably shouldn't like, but I love it anyway. It's the most 90's thing you will ever read in your life, it's: 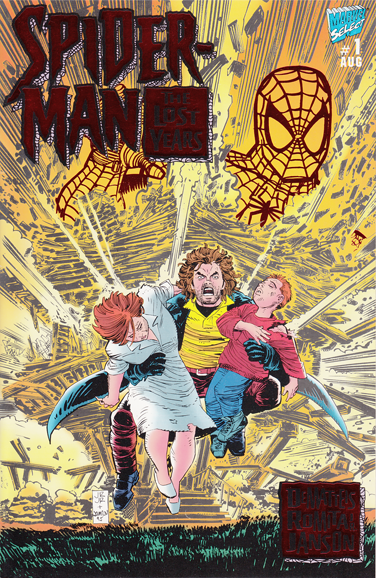 Back in the good ol' days, we didn't have none of this Superior crap. When the writers wanted to replace Spider-Man, they just came up with a convoluted and confusing storyline to replace him with a clone, then say the clone wasn't the clone, but then reveal that part was actually a lie, and by the end everyone just heaves a sigh of relief when he dies. Point is, Ben Reilly was a clone of Peter Parker, who ran away from home years ago. He spent a lot of time wandering and being all brooding, and this comic reveals what he was up to.

We start on a crowded highway outside of Salt Lake City. A truck driver passes out from exhaustion, and is about to smash into some people before a mysterious man breaks open the window, pulls him out, and redirects the tractor trailor off the highway. He gives mouth-to-mouth to the unconscious driver, and runs away before anyone can catch him. Who is this enigamtic figure? This guy. 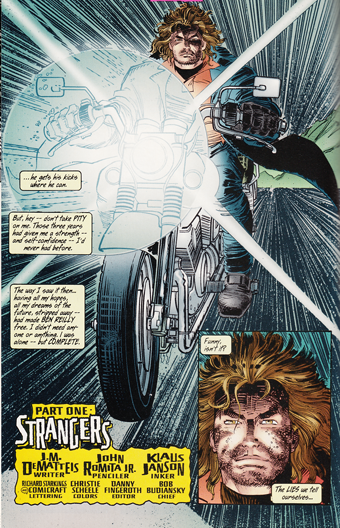 The magnificent spectacle you are now viewing is the most 90's thing in existence. Look at it! He has a mullet, 5 o' clock shadow, and a long duster trailing behind him while he rides his chopper. The fact that it's drawn by John Romita Jr. only amps up the 90's. I would even say this is... radical?

Anyway, we cut to a bar in Salt Lake City, where apparently this is going to take place. There sits another mysterious man. Listen, we're just going to keep getting those. Let's listen to his internal monologue for a bit. 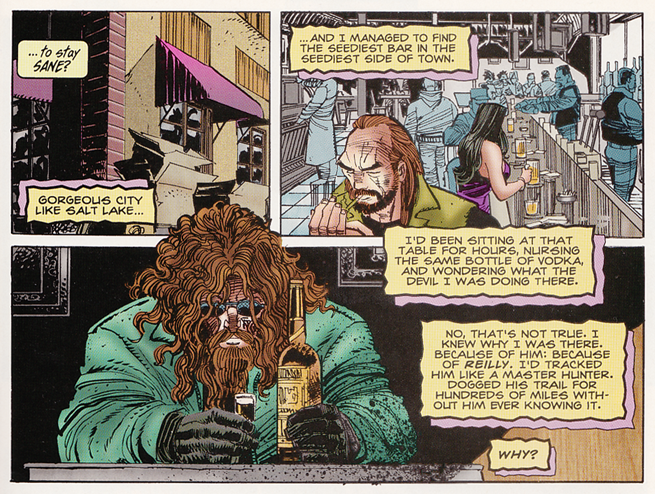 That's Kaine, another clone of Peter Parker, only much more dark and brooding, because he was a failed clone, which means he's stronger and more powerful than Peter. Wait, what? Oh, his face is sort of scarred, okay.

He's been chasing Reilly for a long time, for reasons he doesn't quite understand. He reveals, as will become a regular thing, that Ben Reilly was actually the original, and that Peter is the clone. Of course, this was later proven false by the end of the Clone Saga, so this story only makes sense in that tiny context.

Anyway, he's propositioned by a hooker, and is accosted by her pimp when he declines. Kaine beats the hell out of the pimp, and gives money to the prostitute. Aww, he really is a softy! Of course he does this while contemplating the misery and pain of his life. On the way out he bumps into a woman who asks his name. He replies, "You can call me Kaine." She's evidently there to meet up with some mob types. 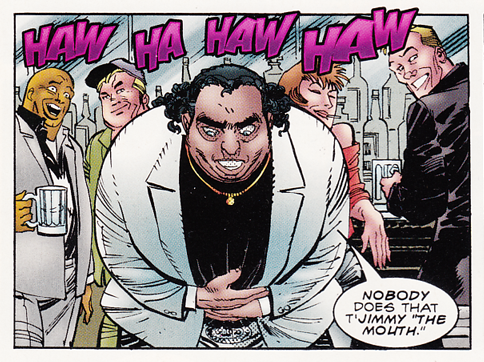 We then cut to Kennedy's office at the police station, and her partner, Detective Jacob Raven. He's a damn good cop in a town gone bad. And I love it. 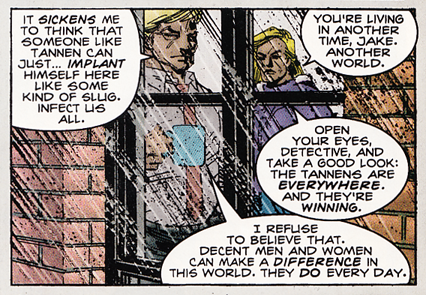 In a jail cell, we see Vincent Tannen, the local crime boss, organizing a hit with the help of a dirty prison guard. We don't get much of that before it's back to Ben, at a job interview for a teaching assistant at some college. Fake credentials and references get him the job, so he celebrates at a local diner. The next panel is best read if you're listening to the Romeo and Juliet Love Theme. 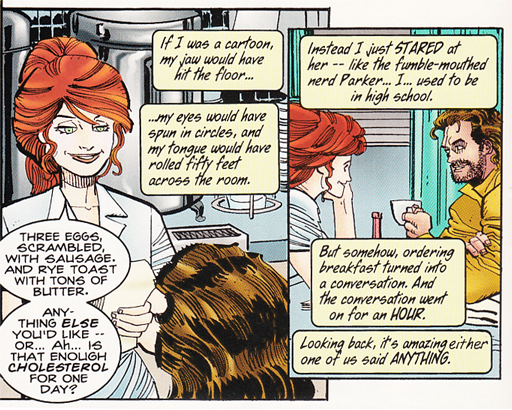 And Ben Reilly instantly falls in love with this redheaded woman for some reason. It's so weird, it's almost like she reminds him of someone else... Anyway, he asks Janine out on a date, and she says yes. That night, Kennedy catches a Tannen underling in a sting, but some goons ambush her, and it's up to one bearded man to save the day. Kaine beats up the goons, and they arrange a late night rendevous. Two other thugs pull Raven into a car, and he's spirited away. At the same time, Reilly happens to be cycling past a house when his Spider-sense goes off, and then the house explodes. He pulls two people out of the wreckage, while lamenting the responsibility that comes with his power.

Kaine has also fallen head over heels for a lady almost instantly after meeting her, and they just had some PG-13 rated relations! Louise gets a call informing her that Raven's house just exploded, and now she is sad.

At the close of the issue, Ben stands on top of a building, pondering whether he really wants to get involved with Salt Lake City's problems. On our next exciting episode: Who will decorate for Kaine and Louise's wedding? When will we find out Janine is also a clone? And can the mullets get any bigger? Find out next time on the W Defender!
Posted by Walter Sojda at 3:38 PM