In 1996, after a couple crossovers, DC and Marvel decided to do something fun together instead of fighting all the time. What they did was something nobody actually likes. It's called Amalgam comics. Sure, people liked it when they combined Batman and Wolverine, but does anyone care about Magneto and his Magnetic Men?! ...Okay, well, in Amalgam, they just combined two of their characters to make one that was either incredibly popular or whom everyone tried to flush from their mind as fast as possible. Try and guess which one this was. 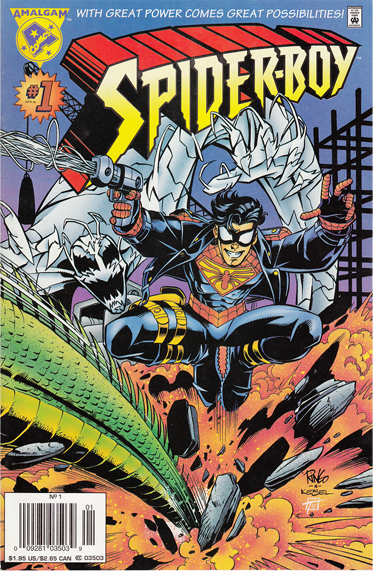 In case you couldn't tell, like me, the two characters combined here are Spider-Man and the 90's Superboy, who is the greatest example of 90's Cool I've ever seen. 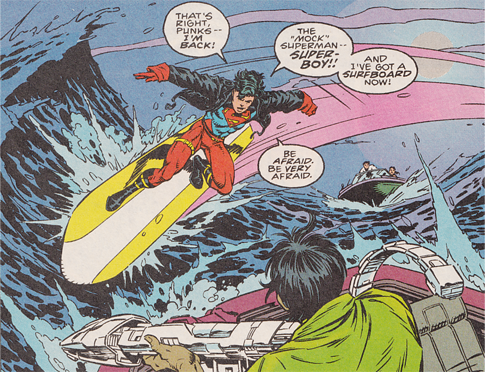 Well it's got 90's Superboy half in it! Sheesh, why is everyone always talking about Dark Claw, this shit sounds goddamn amazing, it's--

Okay, so I think now we know what we're dealing with. So... ahem, Bizarnage wants to absorb Spider-Boy. Or be Spider-Boy. Or something. After some cunning tricks, Spider-Boy locks Bizarnage in a magical science cage. It's revealed this is in the Cadmus facility, which I would tell you more about, but I have no idea if this is just like the regular DC Cadmus but with the Fantastic 4 working there. Oh, the Fantastic 4 work there. Let's see how Mr. Fantastic is in this thing! 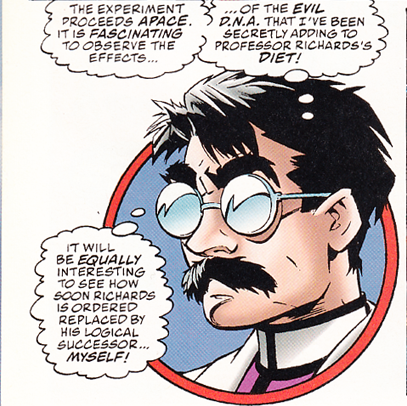 Don't worry, we don't have time to get into that, thank god, because there's more trouble afoot! "King Lizard" (Whom I found out is Marvel's The Lizard and DC's King Shark amalgamated) got out of containment, which is no good. As long as we never have to see Bizarnage again he can fight whoever the hell he wants. Wait, what's the deal on King Lizard? 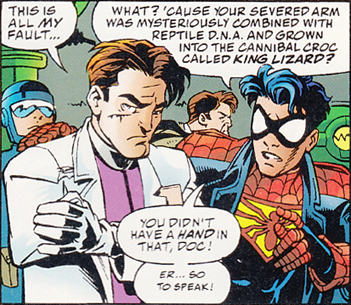 NEVERMIND LET'S GO BACK TO BIZARNAGE

MALL-CRAWLING WALL-CRAWLER?? WHY WOULD ANYONE SAY THAT?!

Wait, stop. I can do this. I got a handle on it. Spider-Boy makes more references to things that never happened so we can all pretend this isn't the dumbest thing anyone's ever made. Then he goes to some section of the lab where there's... Doc Ock... and, oh no. 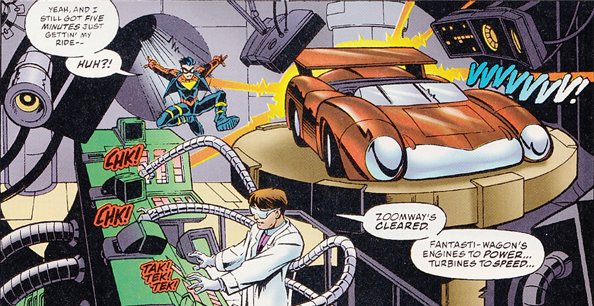 WHY DOES HE HAVE A CAR.

OKAY. SO HE HAS A FLYING CAR. NO BIG DEAL.

Now we got some exposition, which you think might make a tiny bit of sense, but no. It doesn't. So our hero was part of an attempt to create a super soldier serum, so they decided to clone a person with gravity altering powers. Then the lead scientist died in a horrible explosion. Who was that lead scientist? Albert Einstein.

I'm kidding it was PETER PARKER.

So he died without ever showing his face, cool, great. Since the accident somehow released Spider-Boy from his cloning chamber, General "Thunderbolt" Ross becomes his father figure. You know, the guy who tried to kill the Hulk for 50 years. So that's all well and good, but then. 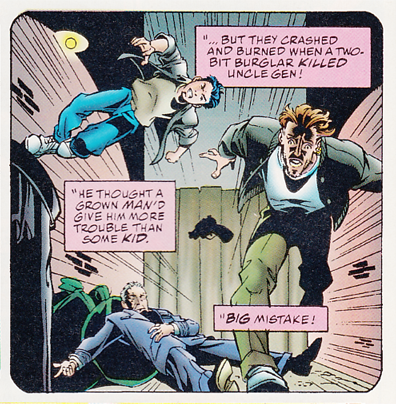 Welp. I guess you can't be anybody's goddamn uncle.

Back to the story, since King Lizard is loose, rather than try to maybe follow his path of destruction and woe, Spider-Boy decides to go to his part time job. He ends up at, where else, the Daily Bugle. Where, for all of 2 pages we get his nebbish alter ego, Pete Ross. Don't worry, that doesn't even matter, because as soon as he walks in the door, a reporter comes in with King Lizard's whereabouts. That was definitely the way that had to happen. 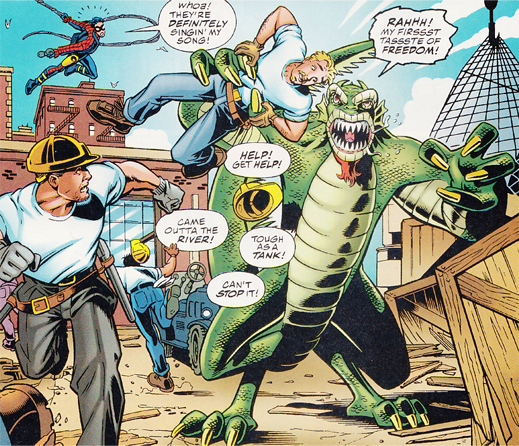 So there's Lizard punching. The "Special Crimes Unit" which just looks like SHIELD shows up and shoots Lizzy, but predictably it doesn't work. Also, wait. Why is he getting bigger? 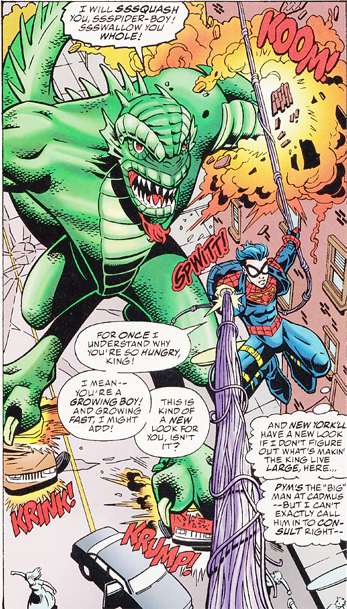 So apparently he's growing because he got exposed to Pym particles, which apparently also exist in this world. So Spider-Boy goes back to the lab, grabs a glowy thing, and throws it into King Lizard's mouth. And then he aaaaAAAAAAAAAAHHHHHH 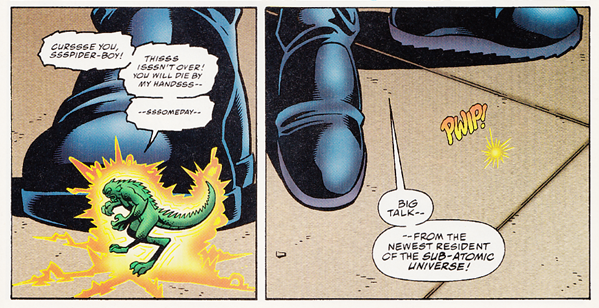 Well good, now I have the irrational fear of shrinking to an infinitesimally small size. At least that wraps everything up. Villain is left to a horrible fate, and everybody is happy. No loose ends, no weird open conclusions, just a nice, simple ending. Yep, sure am glad there's no final image after a cut off senten-- 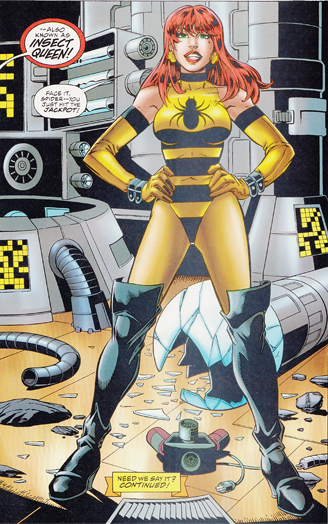 GOT ME AGAIN, SPIDER-BOY!
Posted by Walter Sojda at 4:13 PM