Books From The Bin: Trilby

There's a popular trend nowadays at certain businesses and libraries to have on their premises a book exchange box. There are varying names for this sort of thing, but it boils down to somewhere you can leave old books and anyone who's interested can pick them up. There happens to be some at my local library and my former place of work, so I looked through them pretty often. Usually they end up filled with romance, mystery, or military books, but once in a while I would find something interesting. Typically I'd go for something sci-fi or horror, but sometimes I would just find a book with a detail that piqued my interest. Something like this:


Books From The Bin: Trilby by George du Maurier 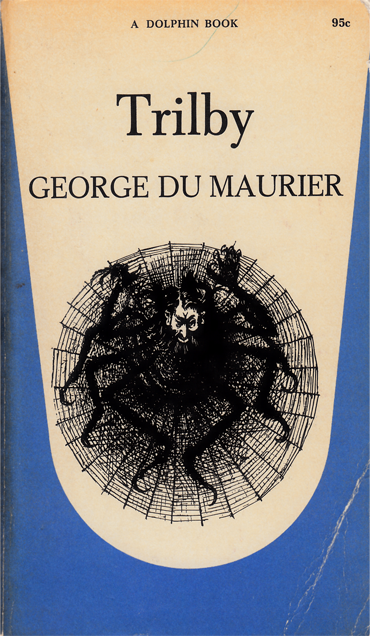 Trilby is a novel published in 1894. It is set largely in Paris, particularly in the bohemian quarter, with a cast consisting mostly of English artists. As the blurb on the back says,

"Its success was extravagant; as du Maurier's son later recalled, 'People went Trilby mad.' The appeal of the story is essentially nostalgic, for it captures perfectly the mood of a generation and a place—not as it was, but as it was fondly remembered, years afterward, from a comfortable studio in Hempstead."


From this, I was expecting something along the lines of a small Proust narrative, or maybe even a Kerouac-esque tale. For a while it met with these expectations, until it didn't. But I'm getting ahead of myself.

The novel stars three artists, Little Billee, Taffy, and The Laird, none of whom are French, but all of whom live in a studio in Paris. The book begins when they meet two new people on the same day; Svengali, an Eastern European Jewish man, who is a musical virtuoso, and Trilby, an English washer woman who sits for nude portraits and cannot for the life of her, sing. Trilby makes fast friends with the artists, who she soon spends most of her time around. This is despite the fact that often Svengali visits to play a song and harrass Trilby, whom he quickly becomes obsessed with. At one point Trilby complains of a pain in her elbow, which Svengali mends using mesmerism, an antiquated term for hypnotism, discovering Trilby is particularly susceptible to it.

Time goes on in much the same way, with nobody really batting an eye that the dude who plays a good piano constantly harangues Trilby with proposals and lightly-veiled death threats. Eventually, Little Billee discovers he is in love with Trilby when he becomes embarrassed seeing her posing nude at his art school. Shortly thereafter, she quits posing to become a washerwoman full-time. After a big Christmas party, Billee gets shitfaced and asks Trilby to marry him for apparently the hundredth time, only in this instance threatening to leave Paris if she declines. She had declined before because she thought she was too low class for Billee or something.

Turns out she was right, because Billee tells his mother, who arrives in Paris to call off the proposal. Trilby, knowing she was too low class for Billee from the get go, decides to leave Paris herself. Only then does Billee return, fully recovered from his hangover, and gets so worked up about his mother's meddling that he gets the brain fever. Brain fever is one of those things in old books where mental strain makes someone sick, like hysteria but for men.

So Brain Fever Billee is shipped back home to recuperate, while Trilby loses contact with Taffy and the Laird. Five years pass, as Billee finds he no longer has the ability to love. During that time, all three of the artists hear about a new singer, said to be the most amazing anyone has ever encountered. Her name? La Svengali. Nobody seems to think about this. Eventually, the trio visits Paris again, at the same time La Svengali is going to have a concert. They go and are utterly astonished to find out that not only is Svengali married to the singer, but she is in fact Trilby. She sings, it's breathtaking, they all leave and wonder how this could've happened. Later on, Billee runs into Svengali, who spits on him, so they get in a little fight until Taffy comes by and slaps the shit out of Svengali.

Weeks later in London, they attend another concert by La Svengali. This time, when the concert begins, Trilby seems confused, and cannot sing in tune. In fact, she has no idea where she is or why. Or even that she's a singer. Shortly afterwards it was found Svengali, who was always near Trilby during her concerts, has died. Nobody connects any dots. They take Trilby away to find she has no memory of her life as a singer. They assume this is due to the trauma of her husband dying, even though nobody knew until the concert was called off. Anyway she's dying for some reason. She has no money so Billee takes her home to provide for her as she dies. In her last moments, a package arrives with a picture of Svengali, whom she gazes at while she perishes, singing one last refrain in her old way and repeating Svengali's name.

Cut to years down the line, where Billee has died shortly after Trilby, having gotten brain fever again over the thought of Trilby and Svengali. Taffy is now married to Billee's sister and they visit Paris. While there they run into an old associate of Svengali, who reveals that Svengali had been using mesmerism on Trilby the whole time she was a singer, so she never actually learned anything and was his slave for years. Taffy gives the equivalent of a shoulder shrug and the book ends.

Now, I hope you can see my main issue with this story. Let me spell it out. TRILBY IS MIND CONTROLLED FOR LITERAL YEARS BY A CREEP AND NOBODY CARES. The class system alone in this book would be enough for drama, but noooo! Not a single character can put the pieces together themselves. When faced with hardship, they get brain fever. Not even Trilby can figure out what's been done to her, her opinion of Svengali only becoming more charitable after all the time she spent in his thrall. There's no comeuppance for Svengali at any point. He's had all his dreams come true until he unceremoniously and quickly dies for no reason. All he got for his heinousness was a solid slap in the face.

It's such an odd shift in tone, as well. Most of the book has a French bohemian feel to it, a nostalgic appeal as the blurb said, but none of that really resonates when a character seemly beloved by the rest has her autonomy quashed for years on end and quickly dies. There's even pages that detail how beautiful Trilby has become in her last days. It's grotesque!

That's without even getting into the depths of Svengali's character. He is, at face value, a deplorable Jewish stereotype. It seems this was the first popularization of the idea of the Jewish Mesmerist, an unfortunate (to put it lightly) caricature of Jewish men that gives them a sinister power over peoples' minds. And that's only to start! Svengali has wild, unkempt, thick black hair. He never washes, and when finding the three artists doing so, laughs at their absurdity. Although a virtuoso with any instrument, he is always borrowing money and never returning it. Du Maurier even contrasts him with another character, a Swiss man named Antony, who acts the same with money, but due to his more hygienic appearance and more lofty artistic vision, he's a good guy.

It's so odd to read a book like this. I suppose in its time it was taken as little more than a good drama, especially once it was adapted to the stage. But now? The villain is a crude Jewish stereotype, strange, foreign, and utterly reprehensible to the well-bred Englishman. And all of his overblown ire is directed towards Trilby, the object of our main character's affection, a well meaning but simple girl who has few aspirations aside from hanging around and doing the laundry for a few English layabouts. The three main characters hardly seem worth writing about. They're bland, morally upright gentlemen taking a turn playing artist in France while running amok with their rambunctious friends, so typical college students. We hear more of Billee's inner struggles with agnosticism than we do about the horrors Trilby's endured in mental servitude to a cartoonish fiend.

The main feeling I got from reading this book was a condensed frustration. Say what you will about Victor Hugo and his long digressions about architecture and the French sewer system, but he paid service to the main dramatic beats. With Trilby, you can see the horrific events unfolding, but they're played out as merely a trifle, a woman being mind controlled is less terrible than when she looks at the main character in a mean way. The inclusion of Svengali alone would keep this from getting published today, but it's just an unacknowledged part of the book's world.

This kind of moral dissonance is not something you encounter terribly often, at least not in such a toned down version as this. Lovecraft was obviously virulently racist, but each time it was at the very forefront of the story, and it's increasingly likely one would know about his social views beforehand. This is a different beast. It's just casual racism and misogyny right out there and not commented upon.

At first I thought it was odd that I'd never heard of Trilby before, especially considering everyone I knew was at least aware of Svengali. But I think it just sort of faded away with the times. It certainly never had the appeal of a Dostoevsky or Hugo, and at the end all you have are these outdated social views that aren't even being espoused, just displayed. It's comforting, in a way, to know this has been largely forgotten, save for one unseemly element. People have just moved on. I think it's better remembered as the name for a hat.

Email ThisBlogThis!Share to TwitterShare to FacebookShare to Pinterest
Labels: book, book review, Books From The Bin