As I have gotten older, I find myself drawn towards interests of the mind, rather than those of the senses. But on occasion there arises the aesthete within, that which cares only for the novel, the decadent, an as-yet unknown sensation. This frame of mind arose upon hearing of a new beverage, one of limited supply. One that promised danger, a warning I would fail to heed. Mtn Dew: Flamin' Hot. This is not the first such offer made available for special Dew. The first, my own personal white whale, was Cake Smash, a cake flavored soda I may never taste. Filled with such regret, I purchased the premiere beverage with unaccustomed zeal. Despite the dubious nature of the intended flavor, I ordered two six-packs, the maximum.

When one's future is primarily anticipated with an overtone of dread, a single notion of optimism shines all the brighter. And if one makes a bright spot their focal point, it is liable to hurt the eyes.

A week I waited with high expectations. Each hurdle met with the knowledge that soon, soon I would have something new. Each UPS notification was met with delight. I dreamed of ginger beer, of piquant spiced cider, all in preparation for the arrival. In the middle of the seventh day the two packages arrived.

The color is an unnatural, radioactive orange. The fragrance can politely be described as chemical. The primary taste is that of ambiguous citrus, neither orange nor lime nor a noticeable combination. Once one has quaffed a mouthful, there remains the question of spice. One may have forgotten. One could; for a moment. The heat remains beyond grasp of the senses until the very end, when its appearance is masked, subdued. It may be interpreted as the body's own response to what has entered it, such as heartburn or a more malignant reaction.

In short, it could have been worse. I was in no rush to drink the remaining eleven cans, but I had adequate storage, and the expiration date was months away. That could have been the end of it.

That should have been the end of it.

The following morning I brought a can for my coworkers to sample, with most impressions mirroring my own. I received a strange notification of an upcoming delivery from UPS.

"How odd," I mused. "I don't remember purchasing anything else."

I put it out of my mind. It may be from a crowdfunding campaign I had forgotten, or something bought while inebriated. Surely, nothing to get fired up about. The day passed in relative mundanity. Arriving home that evening, my mind lit upon the delivery that had occurred. I had but a moment to muse on possibilities before I saw what had arrived. A chill crawled up my spine. It was the same box as the day before. The tell-tale tape fastening it shut, emblazoned with an impudent fire imp. How odd. Perhaps it was a secret addendum to the soda, a gift pack if you will. I tore off the tape and opened the box, only to be greeted by the same six cans I had unveiled the day prior.


I was overburdened with Dew. My refrigerator was already packed to the brim with a soda I did not have much incentive to drink. But I merely shrugged. It was only soda. Perhaps there was an error in shipping. I set it, unpacked, in the basement. I had to go to bed. Another day of work awaited.

The next day began in my usual sleep-deprived stupor. I regaled my coworkers with my tale of renegade Dew, secure in the fact that this was only a single incident, an anomaly I could laugh in remembrance of. But my cachinnation was short lived.

My phone sounded with another UPS notification.

Just got another UPS notification.


It was identical to the previous message. But it couldn't be. There was no possible way I could get three shipments of soda on three subsequent days, almost entirely in error. A shadow clouded over my mind. Every limb became heavy with cold, carbonated, liquid dread. I had to know. But I was terrified to find out.

It was dark when I returned. A bone-chilling wind cut through my jacket. My hands shook as I approached my door. And there it was, sitting on the porch. More Mountain Dew.


I refused to believe it. Who did this to me? The light left my eyes. I saw my future in this Dew-saturated purgatory. Each day a new delivery of a soda I was beginning to resent. I sat down, staring blankly at the floor. 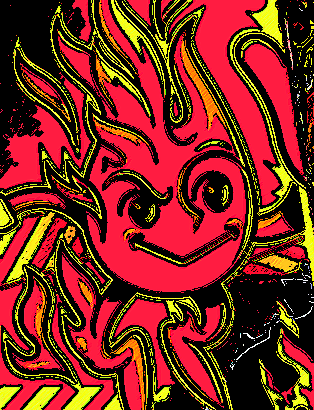