What the freaking hell. You may have heard recently that DC Comics is rebooting all of its titles, starting them off at #1. All of them. I figured something would happen after Flashpoint (the newest crossover crisis thingy) had ended, and I really should've suspected it was something like this.

I just hate it so much when they do this. I mean, for one thing, they just rebooted Wonder Woman! Why would they do it again?! Comic publishers never seem to know what fans want. They either give us the same stories again and again without changing anything, hoping the nostalgia will sell itself, or ignore everything that came before in reboots and stories for "today's audience."

One example of this failing is with one comic in particular: Spider-Man: Chapter One. This was a sales ploy by Marvel to bring new readers to Spider-Man, by retelling his early stories in a way that would replace the old Stan Lee and Steve Ditko stories. Sure, it gained a few new readers, but anyone who had read Spider-Man before that point despised it. It finished its run, but now no mention of it is ever made. Shortly after it finished, they decided to try something a bit different, that actually worked: Ultimate Spider-Man. Putting it in an alternate universe solved a lot of problems in that you didn't mess with any of the previous continuity, and Ultimate Spider-Man turned out to be a huge success.

I think the main problem I have with replacing or deleting old continuity in a bid to gain new readers is the fact that for those who have been reading comics, it makes it seem like all those comics they bought and read were completely pointless. Sure, if it was something stupid like the Clone Saga, people are glad it never existed, but in a case like this, DC is deleting some beloved stories and characters. I say this taking into account that I was very close to becoming DC-only when Amazing Spider-Man hit its lowest point, and DC was busting out their crossover epic, Blackest Night. It just seems insulting that to gain new readers, they'll forsake the old readers who faithfully bought and collected these issues. It's telling the old faithful readers, "Oh, that stuff you bought and read? It's wrong. You didn't even need to get that stuff. What matters is this new stuff, right here. Buy all of it.”

Once again, I have an excuse to explain why I hate One More Day. It said, “Oh, all those loving moments between Peter and Mary Jane, the shaky, strong, and tender parts of their long marriage? Those are meaningless. Now buy these stories about Peter as a swinging bachelor.”

And the problem is, to deal with this sort of backlash, a lot of publishers will start making nostalgia-fodder stories, which do little to improve the state of their comics. Most readers have read or know what happens in the old stuff, so there’s no reason to do it again. They don’t want the same stories retread, they just want the publishers and writers to acknowledge that they happened.

In short: This sort of thing is just insulting to old readers, and really, has it ever really helped new readers? The only ones who seem to care are the old readers who are upset. At least now I know there’s no point in buying DC Comics until September, so I won’t waste my money.

They've released the full page of redesigns for the new Justice League. I am less than impressed. 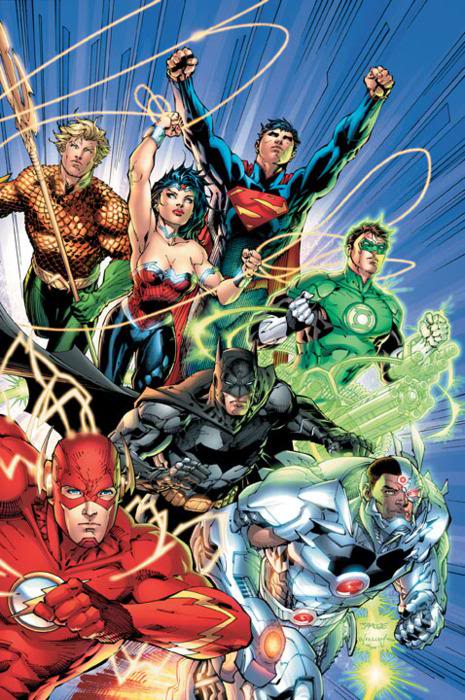 So we have new designs for Wonder Woman and Batman, who were JUST REDESIGNED. Flash looks like a cross between Barry Allen and Wally West, but primarily Allen, which I don't like because I miss Wally West. They got rid of Superman's red underpants, which serve the very important purpose of making the inevitable crotch-bulge less noticeable. Green Lantern seems to have a gatling gun for a dick.
Posted by Walter Sojda at 7:54 PM