Time for the next installment of the series that wouldn't die, New Ways To Die. 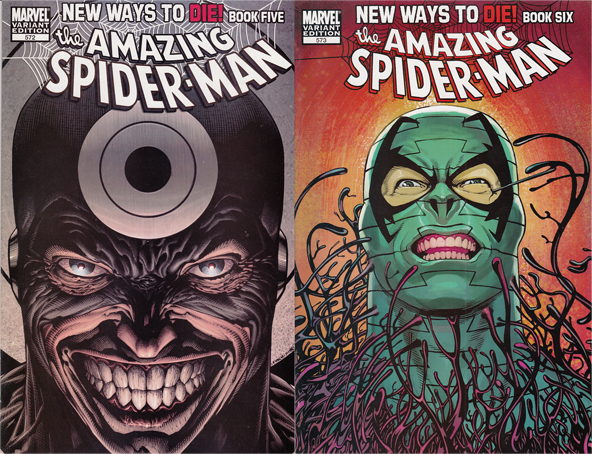 It starts with Peter helping to rebuild the homeless shelter destroyed by the terrible Venom/Anti-Venom fight we all had to witness last issue. Inside are all the illegal sweatshop workers we all forgot about because 12 different plotlines are running through this thing.

The Chinese talk to Martin Li about how they've been used for illegal medical trials by Oscorp, because apparently Osborn can't just limit the evil to only one part of his life.

Speaking of Osborn, we go with him as he explains to his men that the guns he just made will home in on Spider-Man, based on the tech on his camera. Osborn then explains they'll go with Bullseye alone, since he needs Songbird and Radioactive Man to help him fix the symbiote. 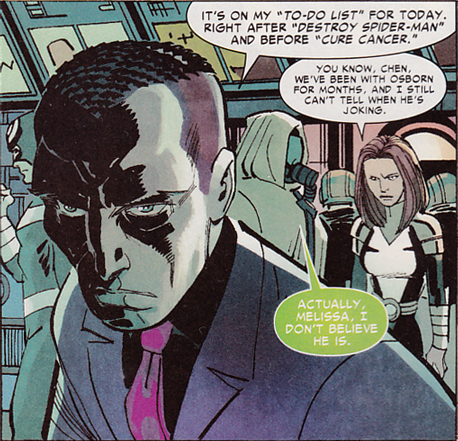 Anti-Venom, who had snuck in earlier, grabs Peter's camera when everyone leaves. Back with Gargan, we see Norman extract a sample of the Anti-Venom, before he heads to another part of the lab, where he has- HOLY SHIT. 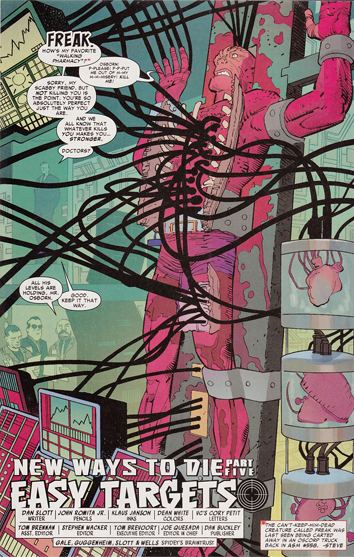 WHAT WHY WHO WHY

No, I can't do it. This is grotesque! See those jars on the left? THOSE ARE HIS ORGANS.

So that's Freak, who apparently can't die, and his body just generates a countermeasure to whatever just killed him. I don't know. He's like a horrible disgusting ripoff of Doomsday.

Norman injects him with Anti-Venom, which, apparently, makes him produce a super Venom? I don't really get it. I mean, the only thing I know about this guy is instantly contradicted. Really, shouldn't something that heals him just heal him a bit? Does his body really need to counteract it? To be honest, the less time thinking about that guy, the better.

As Norman goes a little Koo-koo in his lab, Bullseye and the troops end up at Harry's coffee shop, where Peter, Harry and Lily are talking. Wait, now that they can track him, wouldn't they instantly recognize that Peter is Spider-Man? He's standing right there! I guess they never considered Parker might be Spider-Man, even though they found a camera taking pictures of Spider-Man with no Parker there, and there's only three people, Parker included, that could now possibly be Spider-Man, and the fact that Norman knew Peter was Spider-Man WAS A GODDAMN PLOT POINT FOR THE ENTIRE TIME GREEN GOBLIN EXISTED!

Sorry, lost my cool there for a bit. But don't worry, cool's back.

The troops throw smoke grenades, as Pete, Harry and Lily flee. Peter "runs for help", crawls around, and punches a dude in the head. He quickly wishes he hadn't done that.

Did those bullets just curve? Bullets don't work that way. So, he's been shot. A lot, judging by those bullet-trails. Can they explain how he's still moving?

So you're telling me you can get shot 20 times, but as long as they miss your major organs, you can still run around?! Apparently, Spider-Man runs on HP, and it's not 0 yet. Anti-Venom comes out of nowhere to kick the shit out of some dudes, then hands Peter back his camera. Spidey quickly figures out what's going on. When Bullseye comes to finish him off, Spider-Man throws a web ball at him which has his chest-spider, and tracking chip, on it. Since the Thunderbolt soldiers can't take orders very well, this happens. 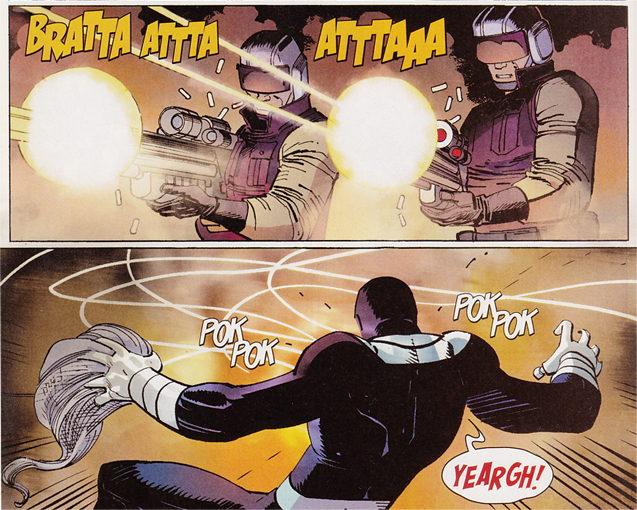 Wait, if the magic moving bullets are so damn accurate, shouldn't they shoot the chip in his hand, not his chest? There's nothing on his chest for them to home towards. Even if you accept that somehow bullets can change their trajectory mid-flight, this still makes no goddamn sense!

Since Spider-Man pretty much just killed Bullseye, the battle's over, and Anti-Venom offers to tell Spidey where Osborn is.

Back with Osborn, he shows up at the lab dressed in the whole Green Goblin outfit, because nothing makes the Feds want to make you lead a team like a garish clashing outfit you wore while killing people. He reveals the thing he was making in his workshop, and gives it to Gargan. Uh oh, I don't think I'm gonna like this. 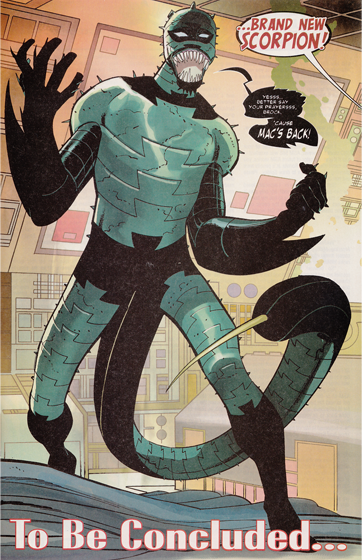 The next issue begins with Harry talking to Norman, with Norman doing the whole "Join me, and we can rule the Galaxy as father and son" thing he's always going on about. Spider-Man and Anti-Venom head over to Oscorp, and go in separate doors. Songbird quickly spots Spidey, and zaps him, only to be met with something really unpleasant. 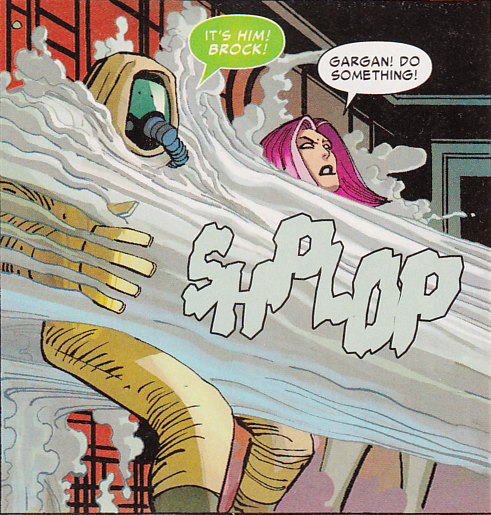 There is no way to make that panel okay. Keep in mind, that's Anti-Venom's main power. Shooting white glop at people. And some people wonder why I don't like him.

Scorp-Venom and Anti-Venom start fighting, as Harry and Norman try to find the real Spider-Man. He finds them pretty quickly, smashing into Norman from the ceiling. Man, he does that a lot in this storyline. I feel like I should've kept a counter. He does it, what, at least once an issue. Norman pushes a button, summoning the glider, which scratches Spider-Man on the way over. After jumping on the glider himself, Norman raises some questions.

Now, this is supposed to make us believe Harry's relapsed into Goblinism and is, in fact, Menace. We know better because we're from the future.

Spider-Man jumps on GG and smashes him through some walls, until he finds a room full of Chinese people strapped to the walls. Before anything can be done, Norman activates the self-destruct mechanism, forcing Spider-Man to save the test subjects. Spidey reluctantly frees Songbird and Radioactive Man and mostly everyone flees, except for the Wonder Twins. 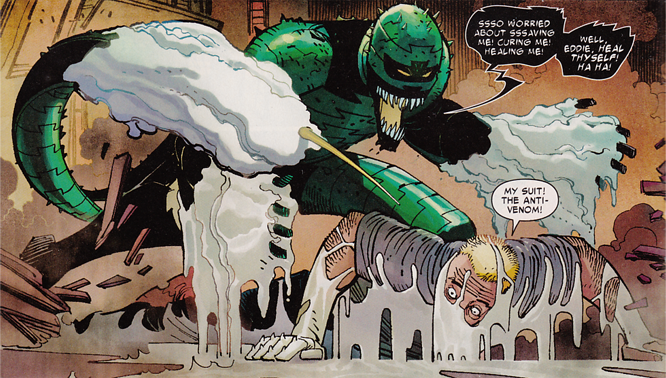 Venom realizes he can't kill Brock, because the symbiote still has feelings for its ex. I expect later that night, the symbiote will drunk-dial him and try to reminisce about the good times. The building collapses, but don't worry, everyone important got out okay. Well, except Spider-Man. 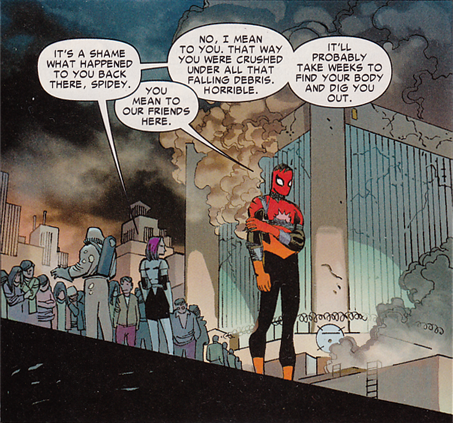 I guess the Thunderbolts decide killing Spider-Man should be put on the back burner, so the next day Norman announces that Spidey was buried under the rubble, but still man, he was making all kinds of cures in there, so you should hate Spider-Man just in case he comes back to life.

Back at an Oscorp office, the gang is looking through some books, looking for some research materials, to dissociate Harry from the human testing, presumably. As Harry goes into the next room, Peter's about to grab another book on the shelf when this happens: Yeah, foreshadowing? Harry finds the file he needs and they all leave.

Back at the homeless shelter, all the former test subjects are there, and apparently all the miracle healing has ceased, as well as most people relapsing. Martin Li has an uncharacteristic bought of crankiness, CoughMr.Negativecough, as Anti-Venom shows he's still alive in the ending narration.

Finally! We're done! And what's the damage? Pretty much everything. This story is unpleasant, uncomfortable, and not well thought out. The tons of plot threads dangling through it only needlessly complicate matters, while the main story itself is just downright dumb. The fake politics are forgotten halfway through, the Chinese test subjects are never really explained, and Anti-Venom. Just Anti-Venom. His inclusion alone would be enough to make this series bad, but when you combine it with everything else, this thing becomes a train wreck.

The art's done by John Romita Jr., who's usually pretty good. Unfortunately, he seemed to be stuck on Grim 'n' Dirty Mode while drawing this, because everything he depicts just seems icky. I suppose there's not much you can do when you're asked to draw a guy who shoots white goo at people, but I'm still not much of a fan.

The writer: Dan Slott. This was before Big Time, but more importantly before Superior Spider-Man. There are things he can write well and things he cannot, and this storyline showcases most of what he can't. This was made during the time when Amazing Spider-Man had a few rotating writers, and how Slott became the main writer I may never understand. Especially considering he continued to write things like this: 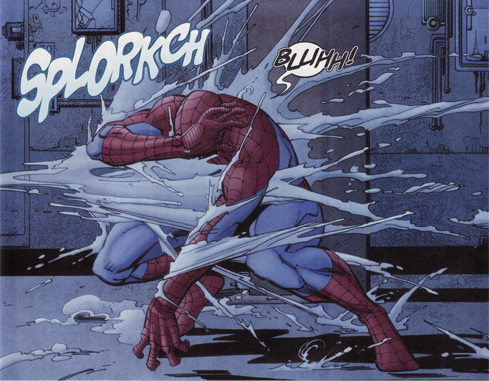 Well, it's still better than Superior.