This holiday season, I think it's time to remember the important things in life. Friends, family, the complete absence of political discussion, and a little film called Frosty Returns. 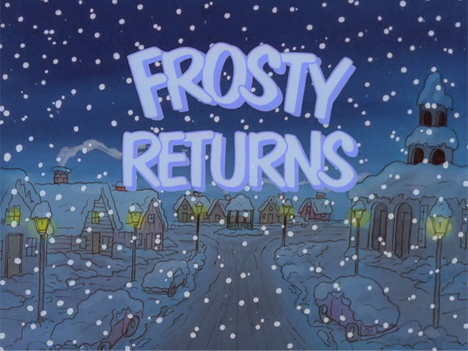 You might recall this, if you're me. Starring John Goodman as the eponymous precipitation made animate, and drawn like bootleg Charlie Brown, this little film seemed innocent enough, but as the years went by it resurfaced more and more often in my mind. Why? Because of a little thing called Summer Wheeze. 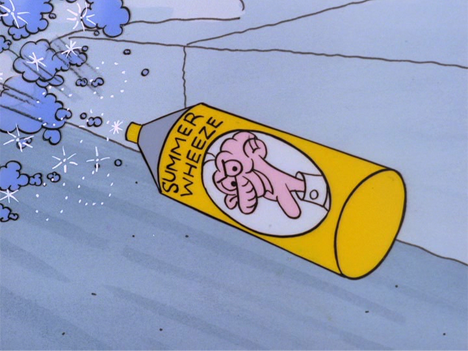 An entrepreneur, no, a genius, named Mr. Twitchell invented some formula, that, when sprayed on snow completely disintegrated it. I don't mean he made it melt or evaporate, I mean a little spray from this can annihilated snow. Now, surely, such a man would be heralded as the second coming of Christ, right? Think about the preventable deaths, no more getting stuck in snowbanks, no more mountain climbers dying in avalanches. Who gives a shit about mousetraps, beat a path to this guy's door! But does this man get the recognition he deserves? No, because of goddamn Frosty the Snowman. 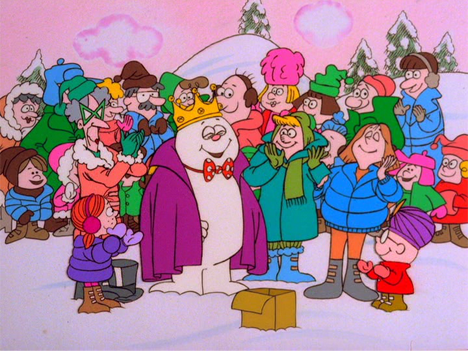 Frosty, the egotistical bastard, did everything he could to brainwash the people of Beansboro into discarding the most important scientific discovery of the century. Oh, just because he happens to be made of snow, that makes it okay?! Like the Pied Piper, he entrances children and adults alike with his siren song, making them abandon the fruits of scientific progress and even dub him King. This short tries its best to demonize Twitchell, like when one of his board members protests about the unintended effects Summer Wheeze may have on the environment, he unceremoniously sends her chair hurting down through a trap door, like some kind of discount Blofeld. 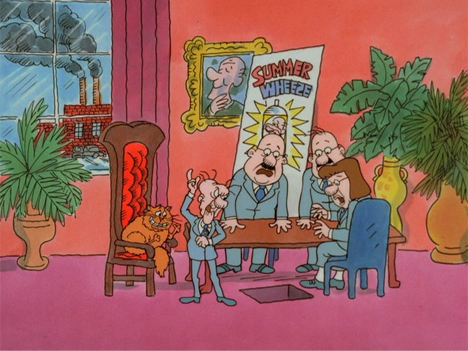 And yeah, I must admit, Twitchell could have used some better marketing execs, and maybe he would have been more successful if he didn't focus all of his efforts on one small town. Though he did provide, free of charge, Summer Wheeze trucks which drove through the town, completely eliminating all snow on or around the roads. He's not just an inventor, he's a public servant! 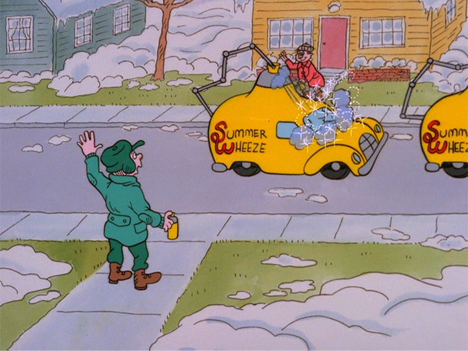 I suppose one could make an argument that Twitchell's motivation was only to be named king at that winter carnival, but who doesn't want recognition now and then? Can't we separate the man from his work? Not to mention, by the end of the short, Twitchell's crashed his car into a frozen lake, which surely killed him in time, due to his advanced age and feeble state. Did Frosty go to help the man? Of course not. All Frosty cares about is the profligate extention of his unnatural, eternal lifespan. He doesn't concern himself with human existence, they're all mayflies to the immortal homunculus dubbed Frosty. Of course, the narrator tells us Twitchell somehow survived, and changed his business strategy to making sleds. Sleds?! From Our Benevolent Lord Twitchell?! I don't believe you for a goddamn second, you irredeemable snow-gremlin! 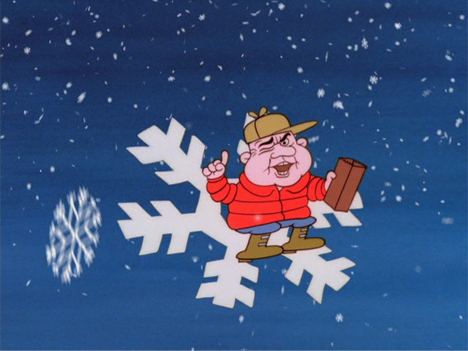 So next time you're skidding hopelessly down a poorly plowed road into certain death, or angrily shoveling your driveway for the third time that week, you can thank your good friend Frosty for stifling progress back to the Ice Age. And maybe, just maybe, you'll remember the man, the legend, who looked at the state of things and said, "No thank you, I think I can fix that." Our fallen hero, Mr. Twitchell. 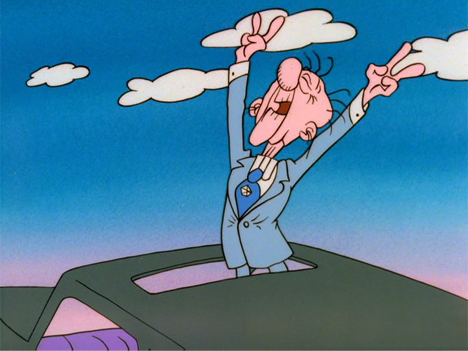 Email ThisBlogThis!Share to TwitterShare to FacebookShare to Pinterest
Labels: cartoon, Frosty the Snowman, W Defense, Why?